Angus Australia strategic operations manager, Christian Duff, presented a poster at ICoMST2018 regarding the prediction of carcase intramuscular fat (IMF) and marbling based on research made using live-animal ultrasounds in Australian Angus. 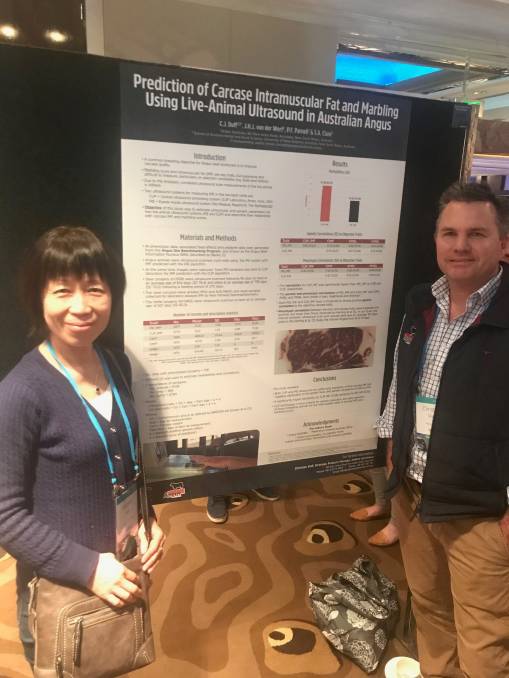 AS National Science Week drew to a close, Angus Australia’s strategic projects manager, Christian Duff, Armidale, appeared at the International Congress of Meat Science and Technology to present the innovations made in Angus beef genetics through Angus Australia’s science-based initiatives.

Held on August 14 at Melbourne, the ICoMST2018 attracted international delegates to converse and exchange information about the world of meat science and technology.

Mr Duff represented Angus Australia and the University of New England at the conference event and presented a poster regarding the prediction of carcase intramuscular fat (IMF) and marbling based on research made using live-animal ultrasounds in Australian Angus.

The conference themes for this year's gathering highlighted the next generation technologies to assess carcases and meat, which is an integral focus at Angus Australia in terms of breed development and the research into herd improvement.

The information put to the forum by Mr Duff highlighted the results and conclusions drawn from research undertaken as part of the Angus Sire Benchmarking Program, that had the objective to estimate phenotypic and genetic parameters for two live animal ultrasound systems (CUP and PIE) and determine their relationship with carcase IMF and marbling scores.

However the CUP system had a significantly higher heritability and would be generally more suitable for genetic evaluation and early selection of Angus breeding animals for carcase IMF and marbling score.

Mr Duff said attending the conference was necessary for the continued growth of the science-based initiatives at Angus Australia.

“The consumer is king. Our industry programs, including genetic evaluation programs, need to further focus on providing consistent beef with high quality attributes for the consumer both domestically and internationally,” Mr Duff said.

“There are many next generation objective carcase quality measurement technologies being developed and assessed such as DEXA, NIR, Hyperspectral and MIJ.

“This also includes new ultrasound scan technologies for predicting IMF in live cattle which was the focus of the paper I presented at ICoMST2018.”

Angus Breeders are well placed to take early advantage of new technologies to assess carcase quality through Angus Australia’s collaboration with research and development groups such as the University of New England, Murdoch University and the ALMTech program.

“The next area of cutting edge research in the meat science space is understanding the flavour notes and profile of beef. Like wine, could beef be labelled for the consumer on its flavour profile? If so, could the flavour profile also be manipulated through genetic selection,” he said.