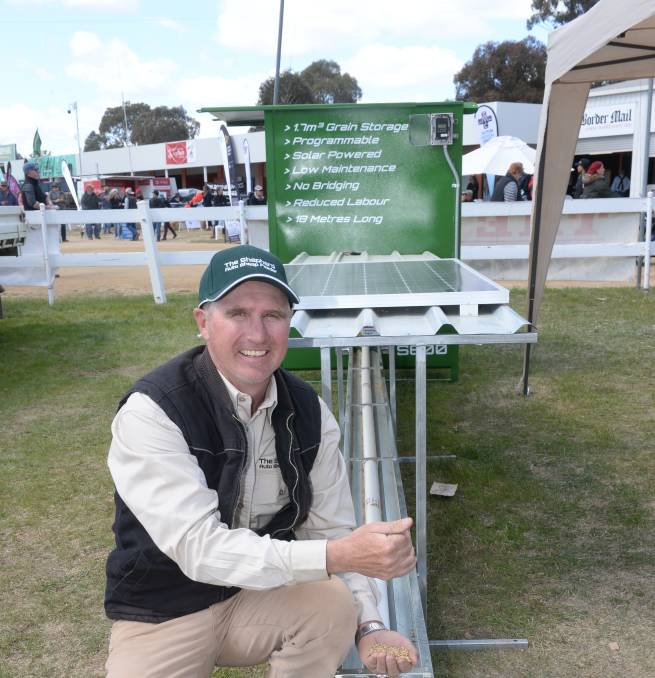 Dubbed “The Shepherd” the feeder delivers controlled rations at pre-set times and sounds an alarm to let sheep know the feeding period has begun.

Entries to the awards must meet the criteria of having a practical on-farm application, be based on an original idea of the entrant and not be in full-scale production at the time of entry.

Announcement of the Agri Innovators Award for 2018

Mr Dunn’s invention is in the final stages of development following trials on his own 1000-head lamb feedlot at Thunder Valley.

He has plans to refine the design with feedback from sheep producers at the field days.

“I would like to get the feeders out to a few farms, obtain more feedback and further refine the gear.

“The Shepherd is ideal for people with full-time jobs off-farm or busy work schedules,” he said.

Mr Dunn is principal of Aria Park High School and juggles full-time work with running his feedlot, a flock of Australian Whites and a cattle and cropping operation.

Justin Dunn talks about potential savings his gear can bring.

“The real benefit I see is eliminating trail feeding.

“Grain is so dear at the moment and it was too expensive to put lick feeders out in the paddock with unlimited access.”

He said using traditional lick feeders he found his sheep weren’t foraging anymore, but rather hanging around the feeder.

“And that meant I was using a lot more grain than I am now.”

There are also savings to be had in the fact the machine is solar powered, meaning its not dependent on mains supply and can be set up in remote locations.

Mr Dunn said avoiding mis-mothering was a huge advantange of his invention.

“The feeders are set up in one spot and the sheep get used to the times when the buzzer sounds – they know the feed is flowing.”

“You’ve still got to be a smart farmer and maintain satisfactory stocking ratios,” he said.