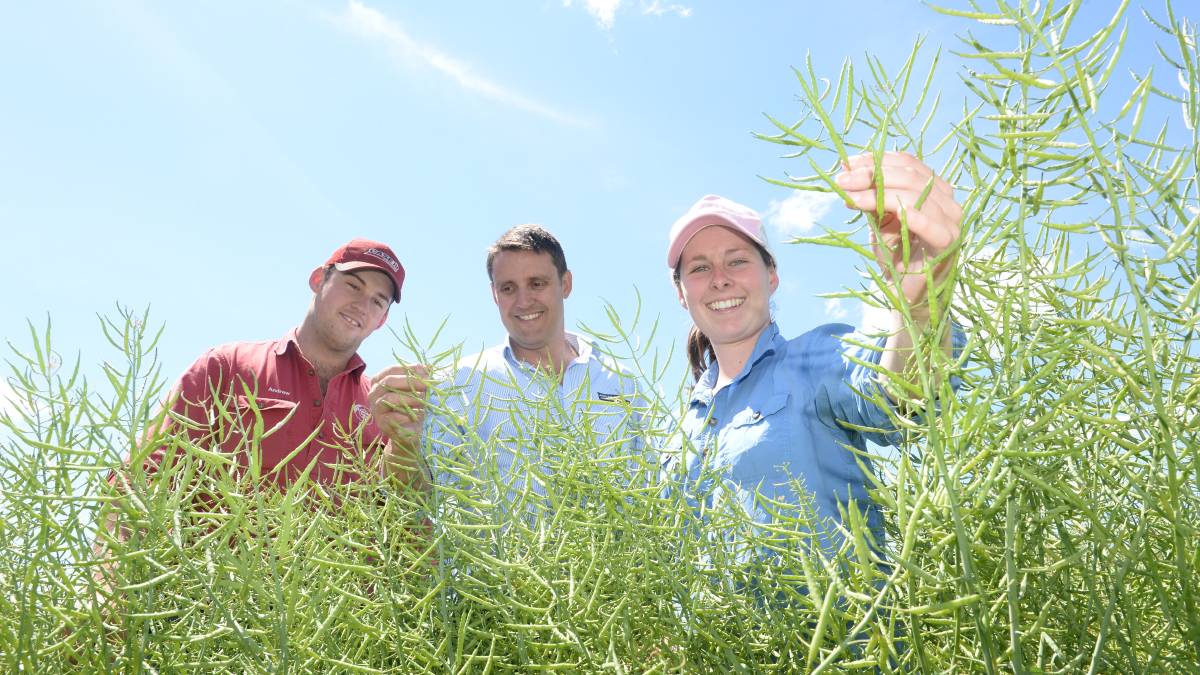 Rain has helped get some crops over the line

For their first year as farmers, partners Marlee Langfield and Andrew Gallagher have ridden a wild ride with their canola crop at Cowra – but rain has smoothed it all out.

With a recent 23mm in the rain gauge at “Wallaringa”, they saw the canola crop come to life, and placed what might have been a baling option in the bin, instead firmly putting a harvest bin date in place for November.

“The difference was almost immediate,” Marlee Langfield said describing what she saw driving past the paddocks a day after the rain. The Clearfield 45Y91 variety soaked up the moisture like a lizard drinking, took an instant ripe green tinge and the seeds pods filled up “beautifully” with the rain boost. And the crop planted in May was suddenly a filling pods where lack of soil moisture had previously stunted development.

Prior to this most recent relief, Marlee and Andrew had envied the increased rainfall being received only kilometres down the road towards Boorowa. Single digit rainfall ticked over the canola crop.

“We dry sowed in May  and we just had single digit rain all season,” Marlee said. “Then we had the 23mm the other week and there was a change overnight. Firstly it was the significant change to a strong green colour, the canola just soaked up that moisture, and the pods started to fill. The pods are now beautifully filled. The variety displayed considerable vigour throughout the growing season. It was also performed well in response to chemical control. We were able to control the weeds and get on top of them very early and now we have a clean, healthy crop which makes significant difference with canola.”

Lachlan Fertilizers Rural agronomist Baden Dickson said the 250ha “Wallaringa” canola crop was on a knife-edge of whether it would be baled or harvested before the 23mm of rain arrived. It is one of the few canola crops in the Cowra district that will be taken through to harvest. It is expected to go about 1.2 to 1.5 tonnes to the hectare.

Mr Dickson said the hybrid Clearfield variety responded well in the conditions with expected higher yields than the Triazine Tolerant open pollinated varieties. Treflan was applied as a pre-emergent and Intervix as the post-emergent. “A few canola crops along that road (the Boorowa road south of Cowra) have fared well considering the conditions.”

Marlee and Andrew will move into a wheat crop next year on top of the canola crop and expand into grazing options. Marlee said she learnt a lot  working at Cowra Graincorp receival silo, helping her understand the best canola varieties for oil content and seasonal conditions. Andrew hoped rain would not bring hail this week.