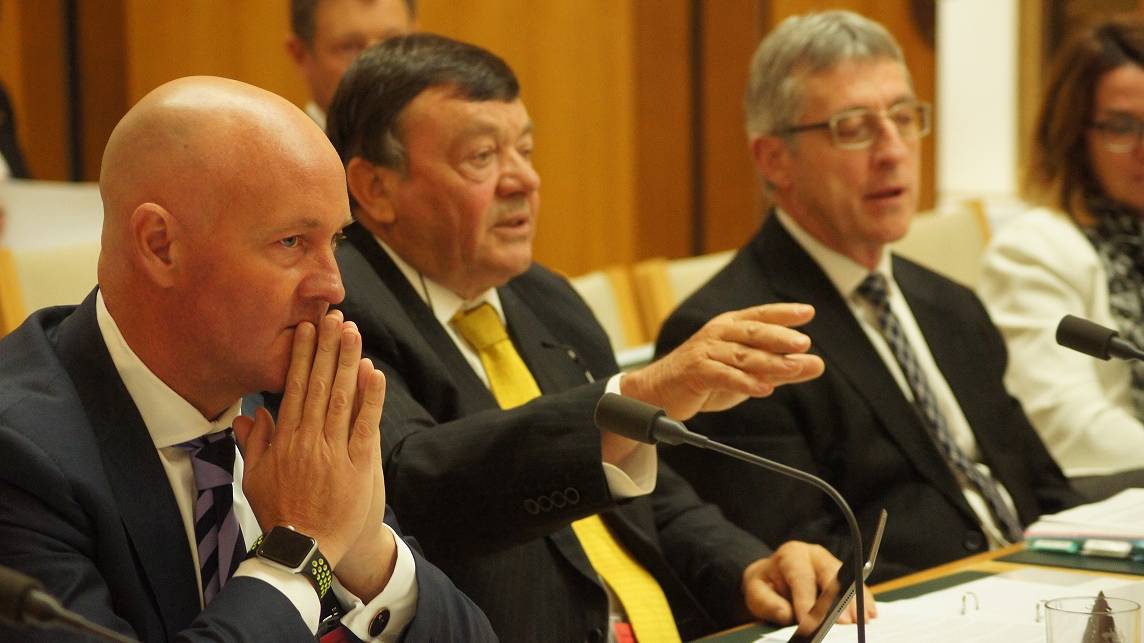 AWI has claimed it would become insolvent if a majority 1.5 per cent levy was voted in at this year’s WoolPoll, despite a record $120 million sitting in its financial reserves.

Australian Wool Innovation (AWI) has claimed it would become insolvent if a majority 1.5 per cent levy was voted in at this year’s WoolPoll, despite a record $120 million sitting in the company’s financial reserves.

Reacting to growing pressure from industry groups’ encouraging woolgrowers to vote for a reduced levy from 2 to 1.5pc, AWI chief executive Stuart McCullough told Stock & Land they “might want to check the batteries in their calculators”.

During a heated interrogation at senate Estimates on Tuesday, Mr McCullough said a lower levy would result in widespread cuts to jobs and research, and marketing projects would be slashed.

Mr McCullough said the lower levy would cut the peak industry body’s income by 25pc, and combined with Australian Wool Testing Authority’s recent forecast of a 15pc fall in production for the 2018-19 season, its total income would be slashed by 36pc, or $40 million.

During the hearing, AWI chairman Wal Merriman said this loss of income would dramatically affect the organisation’s bottom line and render it “insolvent”.

On the same day, AWI released its 2017-18 annual report which revealed more than $120 million in financial reserves – the largest amount since it was founded in 2001.

This bank balance is about $25 million more than AWI’s forecast revenue, estimated on an Eastern Market Indicator (EMI) of 1325 cents a kilogram clean, however the Australian wool market’s rally hit uncharted territory, bringing in over $3.4 billion for the season to see the EMI close at 2056c/kg.

The $120 million reserve is about $15 million more than what it had in the bank last financial year.

The annual report revealed AWI’s total expenditure for 2017-18 was just over $87 million, which falls into the bracket of how much money it predicted it would receive each year if a 1.5pc levy was voted in.

In the WoolPoll Voter Information Memorandum, it predicted with a 1.5pc levy, its annual income would be between $85-$88 million each year for the next three years.

WoolProducers Australia (WPA) believes this is suitable funding for AWI to continue its operations for the next three years, while putting more money back into the pockets of farmers enduring drought.

WPA chief executive Jo Hall said AWI was asking woolgrowers to put the interest of the industry body before their own businesses.

“AWI is asking for 2pc of growers’ incomes to go into their coffers even though many growers will experience a significant decrease in their own business’ bottom line,” Ms Hall said.

But Mr McCullough said WPA’s claims were “complete rubbish”. At senate Estimates, he said AWI required $47 million to remain in the reserves in case a wind-up was necessary. While he thought it was unlikely a 0pc levy vote would prevail, he said the wind-up funds were a necessary safety net.

During the hearing, Liberal Senator Slade Brockman said there were Western Australia growers casting a “protest vote” for a zero levy.

“They're not overly happy with the way things have been handled. What's your reaction to those growers?” Mr Brockman said.

In response, Mr Merriman questioned whether the WA growers were “dissatisfied with the [wool] price?”.

“The world market has a lot to do with the price,” Mr Brockman said.

But Mr Merriman said the “price went up when growers decided to go marketing; there is a direct correlation”.

He said with an increasing number of WA sheep producers moving to crossbreds as a result of the volatile live export market, as well as poor autumn lambing across the country, it would take about four years to get the total annual wool clip back to 365 million kilograms.

“That goes on to affect our bottom line… and will affect our ability to do further research and further promotion of Australian woolgrowers,” Mr Merriman said.

In an online poll conducted by Fairfax Agricultural Media and Mecardo, nearly half of the 300 voters, or 49pc, indicated they voted for a 1.5pc levy amount in WoolPoll. One quarter voted for 2pc, 14pc voted for 0pc, and the remainder voted for other options.

Only time will tell whether these 300 voters reflect the sentiment of the 47,000 Australian woolgrowers who are eligible to vote in this year’s WoolPoll.

With just under two weeks to go until voting closes, as of Monday, only 13pc of eligible voters, or 6201 woolgrowers, had submitted their votes.

AWI said this level of votes cast at this stage was comparable to the last vote in 2015, which saw a surge of votes in the final two weeks.

To encourage a younger generation of decision makers to get involved in WoolPoll, AWI has invested in more digital marketing of the vote than ever before.

The online campaign has been plastered all over social media sites, which Mr McCullough said was part of AWI’s marketing strategy to become more digitally savvy.

“Our shareholders might not be the earliest adopters in this area, but we are fully aware that many principals’ kids are getting back on the farm and we think they have an influence on these enterprises,” he said.

The last WoolPoll held in 2015 cost levy payers about $660,000, more than $15 for each of the 43,000 eligible woolgrowers voters. While more than 20 forums were held across the country in the lead-up to the last WoolPoll, just 50.68 per cent of votes were lodged. This reportedly marked the lowest number of votes in five WoolPolls.

There have been 45 WoolPoll communication and engagement events held this year. There is less than two weeks left to vote in WoolPoll, which closes November 2.