John Richard, Cassilis, says we have to get more species of dung beetle into this country to fill the seasonal gaps. Mr Richard is also pictured on our cover.

Dung beetles are very important little animals who go quietly about their work, unheralded, unseen and so often under-appreciated.

DUNG beetles are important little critters in our grazing systems that are often unseen and so often under appreciated.

Yet, according to one of their biggest fans, John Richard, who wishes to raise their profile, without them, our country would be covered with undissolved dung giving rise to a myriad of flies.

Mr Richard, in partnership with wife Carol, operate a property near Cassilis producing both grass-fed and feedlot-finished beef and they can recognise 11 species of dung beetle on their land.

“But I believe we have to get more species into this country to fill the seasonal gaps when the ones we have aren’t active,” he said.

“The native dung beetles only clean up marsupial pats, and we have to import dung beetles which will clean up after cattle and sheep because they have been imported to this country.”

Mr Richard said the dung beetles are crucial in revitalising the health of the soil as much as removing the cow pats and reducing the habitat for flies to multiply.

“They take the moisture out of fresh manure and bury it underground so flies can’t breed, and in doing so aerate the soil, allowing deeper infiltration of moisture through the various tunnels, recycling available nutrients and sequestering carbon,” he said.

Mr Richard is keen to see further imports of dung beetles from Africa and Europe to complement those which have naturalised to the different regions across the country.

“I’m trying to do something for Australia by keeping the flies down, but we don’t have enough dung beetles which work all year round,” he said.

“Because of our various climatic conditions, we need to import the adapted species to reduce the impact of the common bushfly, but importantly the buffalo fly, which is extending its territory south of the tropics,” he said.

When the larvae of 3000 flies can survive in one cow pat, it is easy to see the demonstrable effect dung beetles have on our environment.

The Richards are supported in their quest to acclimatise dung beetles to their Central West property by John Feehan, director of Soilcam, Canberra.

A former scientist with CSIRO, Mr Feehan breeds and supplies dung beetles to an increasing clientele across the country.

“The recycling of dung evolved during the Jurrasic period, but when cattle were introduced to this country from South Africa, the native dung beetles were not adapted to the imported stock,” he said. 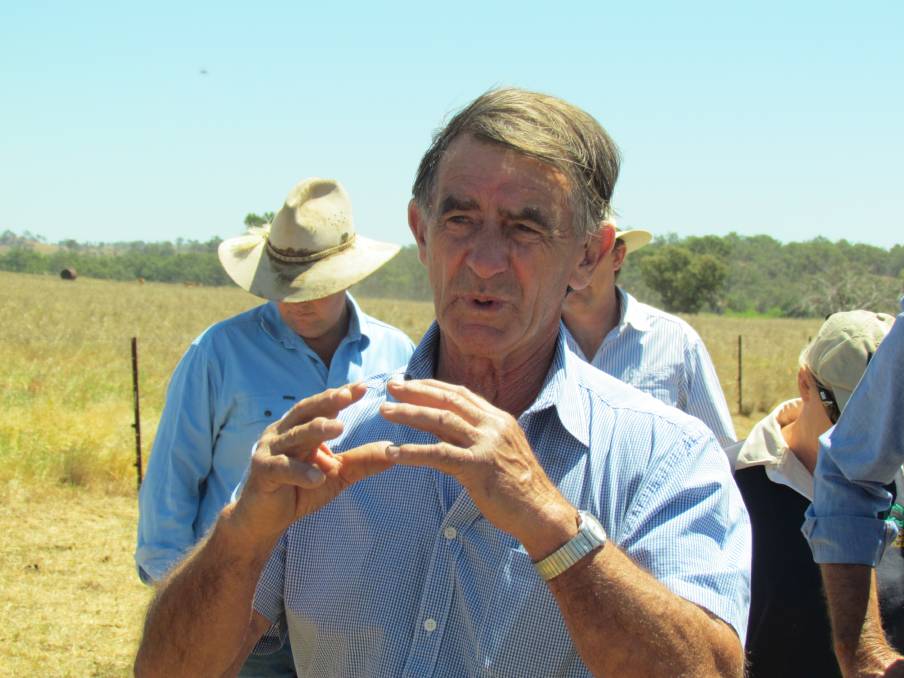 John Feehan noting the importance of dung beetles in recycling fertiliser and raising the health of the soil. Photo: supplied

Fertiliser right where the plants can use it

Dung beetles are a specialised lot, having emerged on the landscape during the jurassic period, with separate species favouring the dung of individual animal species.

So when domesticated livestock, such as sheep and cattle, were introduced to Australia, the local species were unable to handle the manure, says dung beetle breeder, John Feehan, director of Soilcam, Canberra.

“We have 23 species established and we have a lot of support from farmers to increase that number,” he said, of the Australian population so far suited to livestock.

Mr Feehan also noted the importance of dung beetles in recycling fertiliser and raising the health of the soil.

“A farmer will eventually get 100 to 1000 times greater benefit from a new species of dung beetle than from one tonne of fertiliser,” he said.

“In burying the dung they improve the fertility of the soil by putting nitrogen directly under the roots of the plants.

“By carrying out their natural function, the dung beetles increase the microbial activity of the soil and assist in sequestering carbon dioxide.”

With the current focus on climate change and the pollution of our environment, Mr Feehan noted the existence of dung beetles is critical in helping reduce the degradation of our soils.

“When a paddock is perforated by millions of dung beetle holes, 200 to 300 millimetres deep... you can see the enormous effect the dung beetles have,” he said.

“There is nothing we humans could do that would equal the benefits dung beetles produce to reduce nutrient and chemical run-off besides fertilising the soil.

“There will be clear, clean water flowing through our creeks which will ensure our grandchildren have the opportunity for a healthy and satisfying lifestyle.”