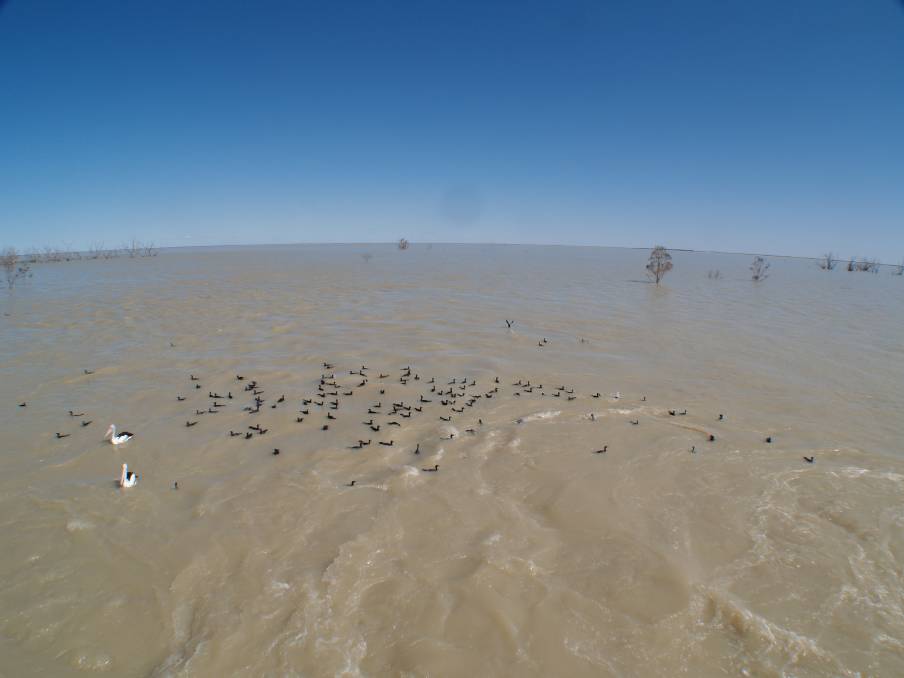 Menindee Lakes in better times. This file photo is taken from 2012 as the Copi Hollow channel releases water into Lake Menindee. The lakes system was at the time full beyond the brim, at about 117 per cent capacity. Photo ANDREW GREGSON.

Both Cotton Australia and NSW Irrigators Council explain they have no water.

IRRIGATORS and cotton growers have hit back at suggestions they, in combination with government policy, were somehow responsible for the fish kill that took out as many as a million fish early this week near Menindee Lakes.

NSW Irrigators’ Council chief executive Luke Simpkins and Cotton Australia general manager Michael Murray have both defended their respective organisations’ water use, while lamenting the fact such a disaster occurred.

Both blamed drought for the fish kill.

“What has happened is as a result of the drought and no water flowing into the rivers. This drought is a devastating time for all of us. This is not about diversions, but about inflows,” said Mr Simpkins.

“Without inflows, blue-green algae events will continue to kill fish. This was predicted in December in an ABC report and algal blooms have killed fish before,” he said.

“It should be remembered that irrigation farmers on the Upper Darling have not been allocated any water from the system for 18 months because of the drought.”

He said general security allocations (meaning the percentage of a water licence farmers are able to use) have been at zero per cent in both the Gwydir and Lower Namoi valleys.

“The water simply isn’t there for anyone.

“As we approach the state election in March and the federal election in May, it is understandable that MPs seeking re-election and candidates seeking election will want to raise their profiles by allocating blame.

“Ultimately it is their credibility that will evaporate when they seek to deny the existence of the drought and the lack of rainfall/inflows,” said Mr Simpkins.

Cotton Australia general manager Michael Murray said cotton growers should not be blamed for this week’s fish kill, nor those last month.

“New South Wales is in the grip of a long and devastating drought. This drought is impacting all agricultural sectors, including the cotton industry where this season’s crop is forecast to be at least half of last season’s,” he said..

“On the Barwon-Lower Darling, the impact on cotton production is even more devastating with no cotton being grown in Bourke this season, down from 4000 hectares the year before.

“Further upstream at Dirranbandi (home of Cubbie Cotton), just 300 hectares of cotton has been planted, which is 1pc of what can be planted in a very good season.

“Cotton Australia is very proud of our industry that produces a quality fibre that is in demand both here at home and around the world, but as an industry we are tired of being ‘the whipping boy’ for all the problems that are being brought on by this crippling drought.

“About 18 months ago, 2000 gigalitres of water was in the Menindee Lakes before the Murray-Darling Basin Authority took the deliberate decision to accelerate releases from Menindee to meet downstream requirements and reduce overall evaporation losses from the lakes.

“In hindsight, this was probably a poor decision, but it does highlight the incredibly difficult task of managing flows in a manner that minimise losses, but ensures enough water is available for communities and the environment during extended severe droughts.

“Since July 1, 2017, irrigators have extracted just 16 gigalitres out of the Barwon-Darling – an amount that would have evaporated out of Menindee in just 16 days.

“Coupled with the extensive drought and the simple fact there has been little to no rain, the release of water from the lakes has exacerbated the conditions leading to these fish deaths,” said Mr Murray.

“What this issue highlights is how difficult the management of the Menindee Lakes is.”