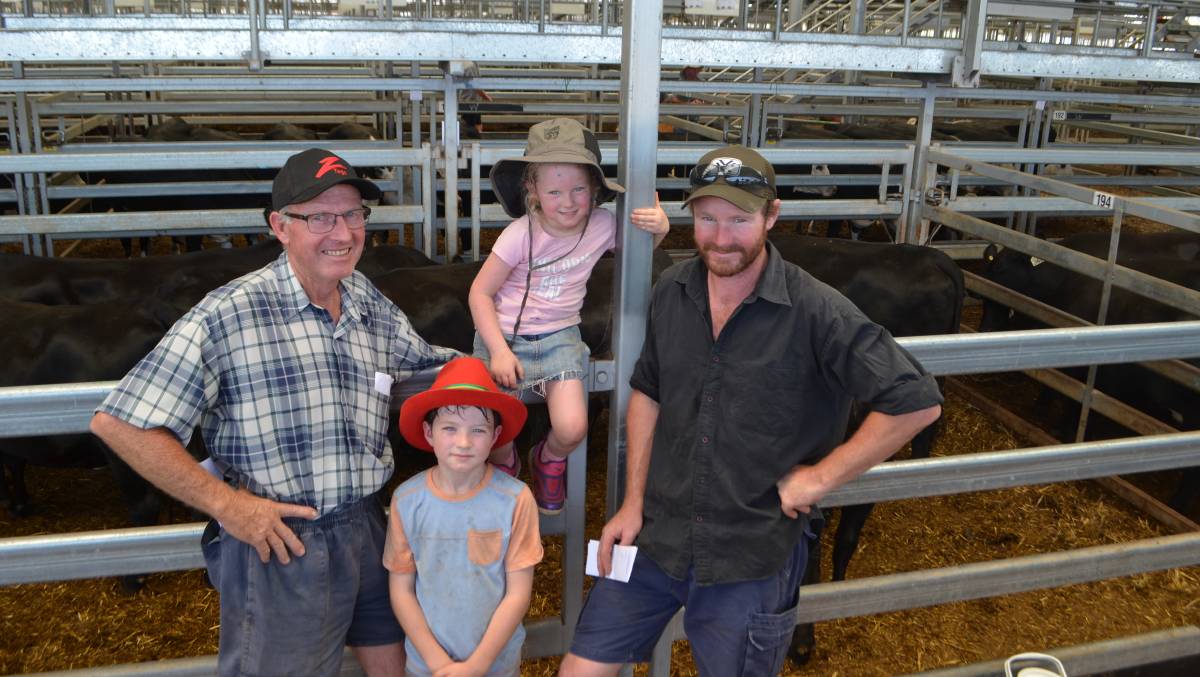 Neville Watkins, Charlock Partnership, Charleroi, Victoria with his grandchildren Darcy and Lauren and son Adrian offered 97 Angus and Hereford/Angus females to top at $1870.

The annual first-cross female store sale at Wodonga on Wednesday had 262 head yarded, and in very good condition despite the tough season across the north-east.

Top price for the two and half-year cows with calves and re-depastured was $2145, achieved for 12 Angus/Holstein cows with Limousin calves sold by Paul and Vicki Hourigan, Everton, Victoria.

They backed that sale with a pen of six Angus/Holstein, two and half years and depastured to a Matthew Park Limousin bull. These cows averaged 668 kilograms and sold for $1600.

Their pen of eight Hereford/Angus, weighing 628kg and depastured to Limousin bulls for eight weeks, made $1870.

Their second pen of same description, but weighed 638kg and sold for $1850, and their pen of nine Angus/Holstein, depastured to Limousin bulls and weighing 614kg, sold for $1740.

The Watkins family offered 97 head which has been an annual event for the past 20 years, buying the best young heifers they can find and resell them after joining.

“We had bought them at what we thought was reasonable price last year,” he said.

“It has been a tight season, but we have been feeding them silage to supplement the pasture.”

The Watkins were a little disappointed with the sale, considering they averaged $2150 at last year’s first-cross female sale.

Among the younger not-station-mated heifers, Ingledale Holdings sold 19 Angus/Holstein, 14 to 16 months and weighing 353kg, for $800.

Reflecting on the sale, Corcoran Parker, Wodonga auctioneer Justin Keane said it was a good top price of $2145, indicative restockers were keen to get quality while they could.

“It was a good result, and I think when you analyse the cattle that didn’t sell well, then maybe that would be quality related,” he said.

“The better joined females here today made $1800 and that is not very shy of last year’s sale.

“Demand is meeting the supply.”

Local restockers were operating while buyers from Corryong and Wangaratta were able to secure their preferred lots.