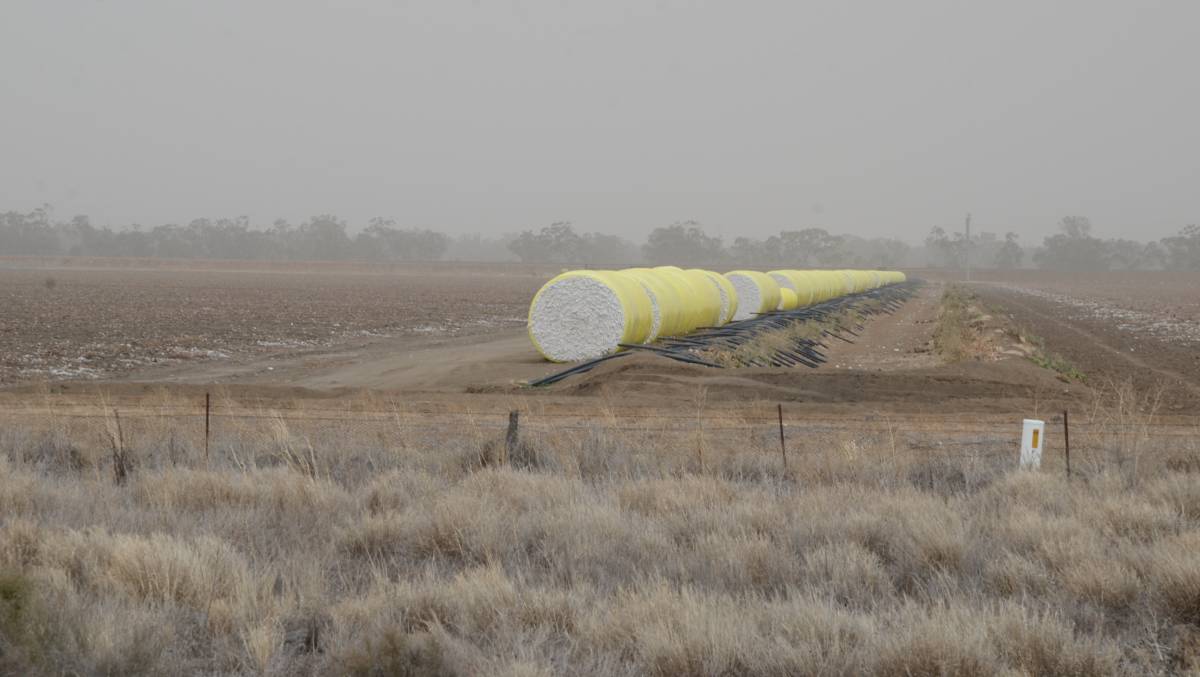 A dust storm passes over stored cotton bales last August. Since winter last year the number and severity of dust storms has been increasing because of the drought.

The time has come for the cheap political point scoring to end.

Just because no cotton is grown in the senator’s home state of South Australia, meaning her risk of offending her constituents is lower, does not mean she can kick us without facts.

Our farmers, like all farmers are struggling through the drought at the moment.

Casting doubt on their reputations and provoking public outrage for political gain is having a real impact on these hardworking people.

It’s time the facts are understood, because we’re here to stay.

Senator Hanson-Young raised a number of points and asked a series of questions of the Australian cotton industry in her recent media appearances taking aim at our sector.

I will now gladly answer those questions.

‘People throughout the basin know water is being sucked out by greedy corporate cotton, dodgy overland water harvesting.’

Firstly, the vast majority of our 1400 cotton growers are family farmers.

We are proud of them, along with the small number of ‘corporates’ that make up our industry.

Our growers produce the best and the highest yielding cotton in the world.

As the industry has publicly stated countless times before, we have zero tolerance of illegal behaviour, and anyone known to be doing the wrong thing should be reported to the relevant authorities for investigation.

‘Where is the water?’

We are in a drought.

For large parts of north-west NSW it is considered the worst drought on record.

The 2018 flows in the Barwon-Darling, which were not touched by irrigators, are the lowest over the past 50 years.

Across all of north-west NSW, none of the major catchments were allocated any water to general security accounts this year, and most have not received anything since 2017.

‘Why is so much less water making it downstream?’

There is no water to make it downstream, because we are in drought.

As stated above, none of the major cotton valleys in north-west NSW have received any general security allocation this water year, which means what little water that has entered the system during this drought has gone to the environment, towns, stock and domestic users or permanent horticultural crops that have access to high security water.

‘Why has Queensland skated through this crisis with seemingly no questions to answer?’

From the cotton industry’s perspective, our Queensland growers have not skated through this crisis unaffected.

Due to the lack of water and reduced allocations, the size of this season’s crop in Queensland is drastically smaller than last year.

Across the Queensland part of the Murray-Darling Basin, the only river flows this season followed a very severe storm that lashed the Darling Downs just prior to Christmas.

It is insulting to growers in places like Dirranbandi, St George, Goondiwindi and across the Darling Downs to say they are not impacted.

‘How did cotton have a bumper crop last year?’

We are proud of our growers for the strong year they had last year. Last year’s crop was largely grown using carryover water growers had in storage after the last big rain event in 2016/17.

This water they bought via their water licence, and chose to use at a later date – last season.

The same is true for this year’s crop that Senator Hanson-Young witnessed.

Growers are using the last of the water they have had in storage in previous years.

The crop size is significantly reduced, but that is one of the great advantages of cotton as an irrigated crop - the crop size can be adjusted to the available water.

Our growers should not be criticised for responsibly managing their water over multiple seasons.

‘Why isn’t anyone talking about overland water harvesting?’

People are talking about overland water harvesting, or floodplain harvesting, as it is also called.

In New South Wales, there has been an extensive government-led process for a number of years working towards the fair licencing of floodplain harvesting, which will comply with the requirements of the Murray-Darling Basin Plan.

In Queensland, the management of overland flow has been in place through the restrictions on the amount of storage irrigators can construct.

‘Why, when every other Australian has to account (and pay) for the water they use in their household, can big corporate irrigators pump what they like, and there’s no way to know how much they’re using?’

Irrigators, no matter how big or small they are, cannot ‘pump what they like’.

Annually, state governments allocate water to irrigators based on the amount of water available in the system, after water for the environment and critical human needs has been prioritised.

The licences allow growers to access a set amount of the total water allocated by authorities for farming.

Farmers with a water licence can use the water they extract to grow whatever they like.

If there’s no water available, there’s no irrigated cotton grown (unless a farmer irrigates using water they stored when there was a high water allocation).

All cotton growers have a requirement to have a working meter, or an authorised alternative way of measuring water take.

Meters are mechanical or electronic, and sometimes they break down.

However, there are procedures in place when this happens where authorities need to be notified and other record keeping practices are put in place.

In December 2018, the NSW Government increased the regulation of metering, with new standards in place. The Queensland Government is in the process of developing a similar set of standards.

‘Why has a water management plan designed to deal with drought failed at the first hurdle?’

The Murray-Darling Basin Plan was never designed to prevent drought.

It was designed to create greater reserves of water for the environment, to help it be more resilient during and after drought.

The Commonwealth currently has an additional 2000 gigalitres of water it can direct to the environment to help minimise the impact of drought.

We are an open, transparent industry keen to inform anyone who actually wants to learn.

I invite Senator Hanson-Young to meet with us to learn more.

The facts are the facts, and it is time for the emotional political games to end.