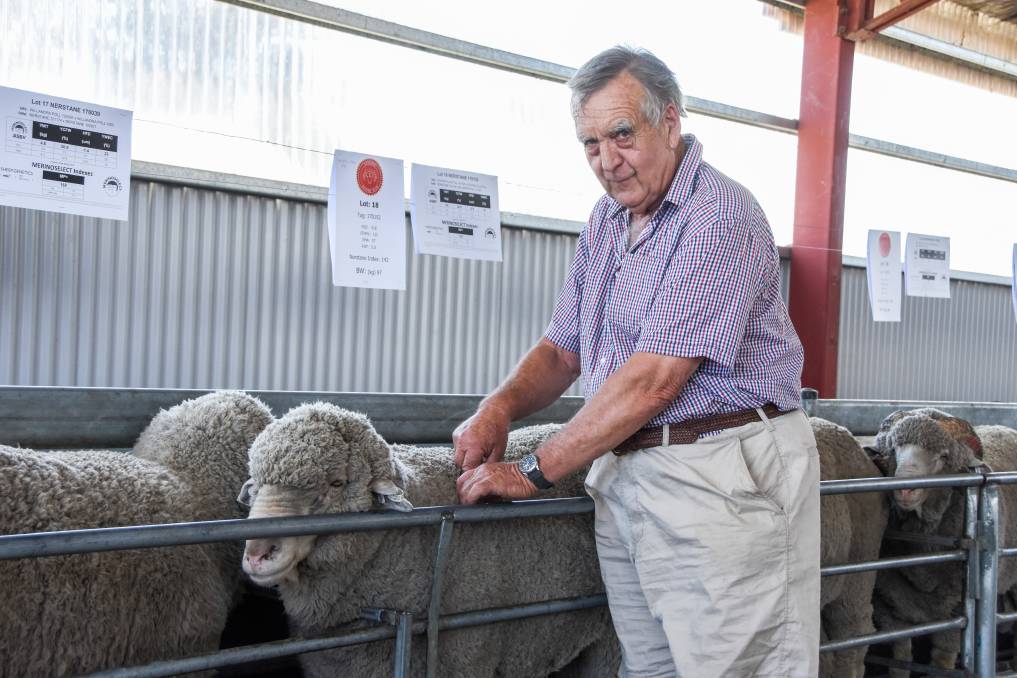 Buyers from across the country flocked to the annual Nerstane ram sale.

THE 1470 kilometre trip for Victorian woolgrowers Will and Katrina Allen proved fruitful when they secured four rams, including the $7000 top seller, at the Nerstane Merino Ram Sale near Woolbrook on Friday.

The result was only slightly back on their 2018 auction where 184 rams were cleared for a $2652 average. The top price ram was bound for Victoria.

Will and Katrina Allen, Denholm Green Pastoral, Hexham, Vic, averaged $5625 for their four ram purchases, all of them polled.

They were forced to pay top dollar of $7000 for the pick of their selections, a son of Centre Plus 185 with a body weight (BW) of 97 kilograms, fat of five millimetres and eye muscle depth of 37mm. The ram recorded a clean fleece weight of 123 per cent

The Allens, whose daughter, Zena Kilpatrick, usually buys their rams, said they were looking for poll rams and quality wool with the biggest cuts.

They run 10,000 Merinos with an 18 micron average along with a crossbred flock on their livestock and cropping operation.

While they have been using Nerstane rams for 15 years, they hadn’t visited the sale in three years but needed new genetics.

“They suit our country and perform well down there,” Mr Allen said.

Unlike many of the local buyers at the sale, the Allens had benefited from a prosperous season.

“It chopped out a bit in the spring but overall it’s a good season.

“You never know what the rams are going to make (but) we weren’t going to go home empty handed anyway.

“We wanted to get what we wanted.” As is tradition at the Nerstane sale, all proceeds from the last ram were donated to the Westpac Rescue Helicopter.

After the birth of her youngest daughter, Yasmin, seven years ago, Ms Stott suffered life-threatening post-birth medical issues and was grateful for the services of their local rescue helicopter for their swift treatment.

“Its for a good cause so the ram was a bonus,” Mr Stott said.

Mr Stott said white, soft and fine Merino rams were on his wish list and was able to secure four rams in total averaging $3142.

“Low fibre diametre and low worm egg counts was what we were chasing,” he said.

The sale was conducted by Elders Walcha with Paul Dooley, Tamworth, as auctioneer.

Read the full report in next week’s The Land.