Moving livestock without dogs, horses or motorbikes could be the way of the future with self herding techniques taking off right across the country. 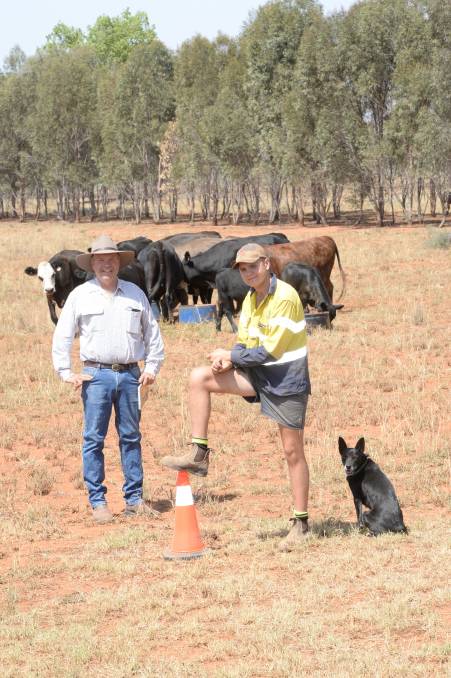 Narromine grazier Bruce Maynard, Willydah, and son Liam with Pandy the dog and attractant stations they use on-farm as their self herding techniques.

MOVING livestock without dogs, horses or motorbikes could be the way of the future with self herding techniques taking off right across the country.

In existence for the past six years, but recently growing in popularity, the livestock management strategy can be manipulated to work on all scales of operation to aid in reducing labor, infrastructure, and stress on both animals and humans.

"We thought behaviourally instead of forcing animals to do things, let's get them to choose to do things and that formed the base of all the methods," Mr Maynard said.

"It works on the basic principals of animal behaviour and attractant stations, such as cut off drums.

"You can train and reward the animals, and by making it slightly different to the animal each time, it becomes rewarding."

Associating sight, sound and smell cues with the attractant stations is important.

"These attractant stations and cues are slightly different every time, and in intensive operations they are constantly changing," he said.

"By having more attractant stations around the landscape, which can be cheap and easy to do through drums, CDs that reflect sunlight or bells, once the behaviour is strongly linked, animals go and seek out the attractants exploring new areas, finding feed, water or supplements or gradually moving to yards." 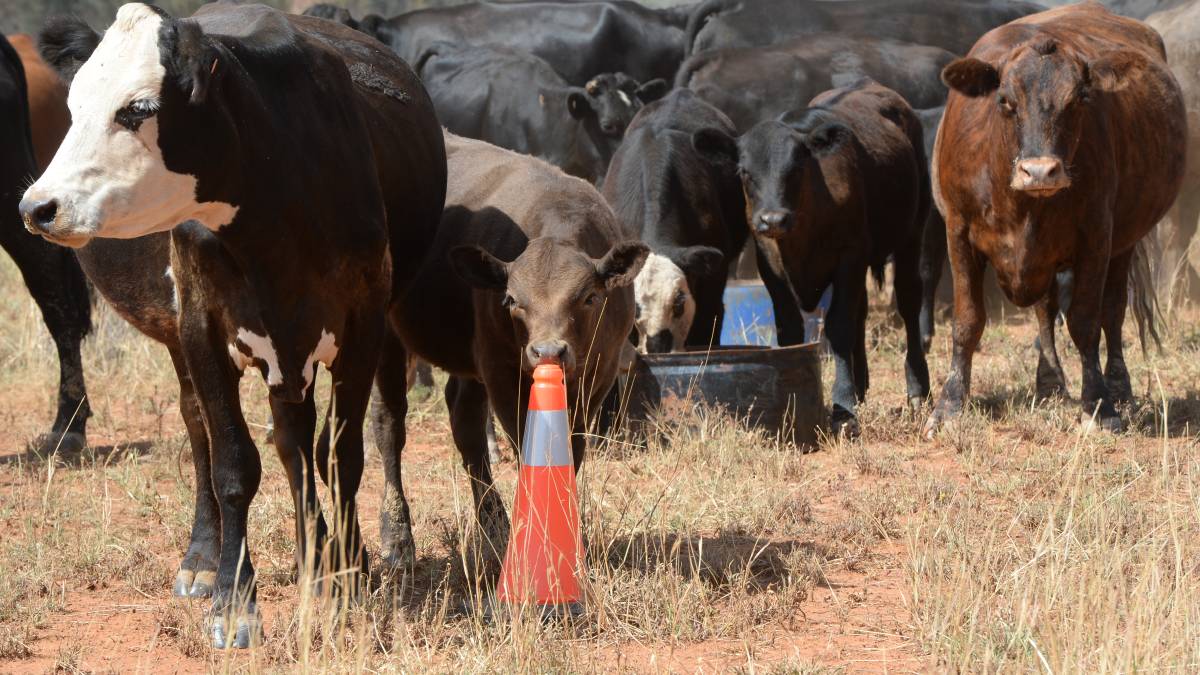 Research in Western Australia from Kalgoorlie to Broome, and over the past 12 months in the Northern Territory, has shown the self herding technique is being adopted at different levels by extensive pastoralists as well as those in intensive coastal areas.

"This coming year we most likely will be doing some more research in the Alice Springs and potentially Norfolk Island areas," Mr Maynard said.

The only thing that changes between scales of operation is the way they use self herding concepts.

"Some people implement a little bit of self herding, others do a lot, but they all gradually nestle into it and work out what they are comfortable with or what works best for them," he said.

"People can turn 50 paddocks into 500 paddocks without subdividing, when they use self herding techniques. You can change things so they explore different areas despite the infrastructure (for example fences) in place."

"In rangelands that don't have full boundaries or in weaning heifers and taking them to another side of a property, attractant stations can help to entice animals to stay in the new place without having to put fences around them."

Mr Maynard said self herding can be used to get animals to move across the whole landscape, to do things such as eat pastures that they usually don't consume or make their way to a mineral supplement station.

"Animals and even we, as humans, largely feel comfortable with things we like and seek familiarity, sometimes taking a step outside our comfort zone and going for something different," he said.

"Behaviours are fixed into everything; therefore you can view it as you can change almost anything through tweaks and minor changes.

"If we don't take an active roll, animals will tend to return to familiarity most of the time

The time it takes for animals to change their behaviours or respond to self herding techniques varies, depending on the animals' previous experiences and genetic make-up.

Mr Maynard said by positively broadening our palates, or in this case the animals', they are more and more likely to be experimental than if they were given the same thing all the time.

"Animals, especially in intensive grazing systems, learn quickly the areas they prefer to graze and stay to this zone. This may mean that pasture utilisation is lowered, areas are overgrazed and manure accumulates in certain places - an ecological plateau is hit," he said.

"Changing behaviour is not just about consuming but how they occupy the whole space and land available, to effectively utilise it and spread manure."

"If you are looking at a one cow per kilometre squared or one cow per 50 metre squared, irrespective of the scale the animals will all do the same thing - congregate at higher pressures around certain spots, such as water, and we see exceedingly high degradation."

In backgrounding operations or bringing cattle from rangelands into feedlots, attractants that consider smell can be used to familiarise stock with feed bunkers.

"Red cordial can be sprayed along a fence, feeder or attractant station to allow first exploration to where the smell is," he said.

"Then after a while when they because familiar with the scent you can spray the cordial along the feed bunker or trough and cattle will approach it and begin to feed."

Mr Maynard said it can help assist producers in getting stock to new watering holes, a task that was previously very hard and risky.

"Some people previously were turning off stock watering points, in the hope that the animals would then walk to find a new water source," he said.

"However, some would sit and sulk and possibly die waiting for the water to come back on meaning it was very risky.

"Now with this technique, they can use attractant stations to guide animals into the area and to the new water point. This is increasingly popular on large scale operations."

The real benefits in the use of self herding are the welfare benefits and reducing livestock stress.

"When you force an animal, you are putting stress on it and downgrading its performance and/or quality. By self herding it removes these pressures," he said.

Extending the concepts of self herding into national parks is the next step for Mr Maynard and Dr Revell, who are going to do some proposed work with national parks services with getting goats out of the parks.

"Essentially if people think about the way they go about the attractants, all they are doing is establishing a habit and setting a trigger," he said.

"For example in wild pigs and poisoning, it is important to offer many free feeds to establish the habit. Once the habit is there, poison is done.

"It can be used for trapping brumbies out of national parks, or to get cleanskin bulls out of the scrub."

Mr Maynard said when dealing with livestock, by using the group dynamic it can accelerate individual behavioural changes.

"Cleanskin bulls need a lot of rewards, but aiming to change the whole group on the place can allow them to come in calmly with the main mob. The main mob will need a small amount of time of reward investment, compared to if you just work on the bulls," he said.