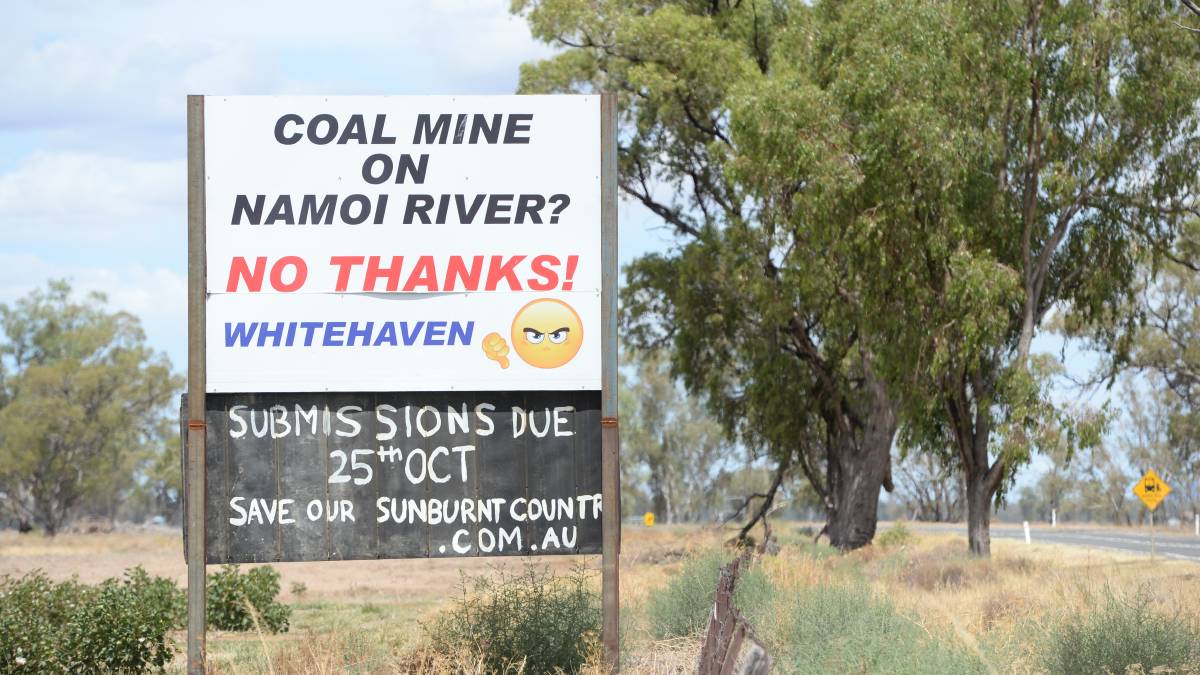 Farmers are fighting against the Vickery mine extension. They say water resources are already under too much pressure. Photos by Rachael Webb.

A groundwater auction at Gunnedah has revealed how little clout farmers have in the drought with mines hungry for extra water.

A recent auction at Gunnedah saw coal miner Whitehaven, who operate Maules Creek, Tarrawonga and the planned Vickery extension mines, successfully bid $930 a megalitre for 460mL of groundwater in Zone 4 for a temporary transfer licence. The under bidder was Boggabri coal.

Farmers dropped out of the groundwater bidding at $300/mL. David Watt, Erinvale, Boggabri, on the Namoi river near proposed Vickery coal mine. He gave up bidding for groundwater at a recent auction as the price soared to $930 a megalitre, paid by Whitehaven. Photo by Rachael Webb.

At another auction at Narrabri on Friday, a mine paid $5100/mL for permanent Zone 5 groundwater.

Farmer Sally Hunter said no farmer could afford to buy water at those prices.

“There is a lot of pressure on water resources at the moment and farmers just don't stand a chance.”

Whitehaven says its water purchases were "prudent for us to take steps as a company to ensure continuity of supply using a variety of different mechanisms". It says it tries to conserve as much water on site as it can and if it has any surplus water, "shares it with its neighbours".

Namoi Water’s executive office Jon-Maree Baker said she was not opposed to the water market trading, but felt that the whole mining approval process was flawed.

There is a lot of pressure on water resources at the moment and farmers just don't stand a chance. - Boggabri farmer Sally Hunter

Ms Baker said there was no indication in early assessments that Whitehaven would need extra water - groundwater that farmers desperately wanted in the drought. Whitehaven already has a licence for 600mL a year in perpetuity.

Farmers and irrigators were already suffering after nearly 80 per cent of their groundwater entitlements were taken back nearly 10 years ago in a bid to protect aquifers by Commonwealth and State governments.

“We would like to know where Whitehaven will be getting that groundwater from, from new bores or from water intercepted in mine operations?” she said. “We need to clear up where that water is being taken from.”

She understood there were 4000 jobs at stake if the mines were not able to function because they had no water. Namoi irrigators were doing it tough with no allocations as Keepit Dam slowly emptied in the drought with no inflows.

Boggabri farmer Dave Watt, Erinvale, said the EIS said that there would be no impact to agriculture by the mines. But clearly there was with miners bidding for extra water on the market.

Already farmers in the area have seen bores run dry as has most of Maules Creek.

Mr Watt has no allocation this year from the Namoi River and relies on groundwater. He grows wheat, barley and canola and irrigates durum, cotton and sorghum. He said he understood its was a free water market, but the fact miners were outbidding farmers showed there was an impact on agriculture.

"A lot of people in our Zone lost 70-80 per cent of their groundwater entitlements, so it's very tight around here.

"We can expect plenty more bidding wars with the miners in the future. They say they have done ag impact statements and that there will be no affect on agriculture, but clearly they are taking water off agriculture. When they are doping these EIS statements they are obviously not telling the truth about what water they require." He knew of one irrigator in the area who had to sell his property as a dryland farm because his access to water dried up. Mr Watt wrote the following letter to The Land:

"People seeking a living from agriculture in the Namoi Valley are under attack on many fronts.  In this extremely severe drought the cracks begin to show more clearly and paper-based plans go out the window.

"We are constantly given reassurances by mining company Whitehaven that they can co-exist with agriculture.  Their Environmental Impact Statements and range of Management Plans state there is no negative impact on agriculture.  What the Namoi region witnessed last week makes coexistence impossible, and the suggestion of it laughable.

"A bidding war in Gunnedah on Thursday saw a temporary transfer of 460mL of groundwater from Zone 4, pushed beyond three times the market value by two coal companies. Farmers didn't stand a chance, most  bowing out around $300/ML, Whitehaven eventually paying $930/mL.

"At another auction at Narrabri on Friday the largely foreign owned mining company paid $5100 for permanent zone 5 groundwater, again a record at levels which are unsustainable for agriculture.

"Yes these are dry times, but would this scenario not be considered in the thousands of pages of models the company uses to justify its approvals?  After all these kinds of extremes are only predicted to increase.

"This spending spree follows claims from Whitehaven that they have adequate water entitlements to supply their new Vickery mine which includes a coal washery, located on the banks of the Namoi River. Additionally it appears  their Maules Creek Mine, which is yet to reach full capacity, is about to run out of water forcing them to cut shifts and potentially shutdown temporarily. Yet they want to repeat this again at Vickery. "Coal miners need water entitlements for three main purposes. To suppress dust on haul roads, wash coal and to account for losses from groundwater aquifers due to their mining process, most of these losses occurring in perpetuity.

"The obvious solution for the miners is to buy more water licenses, at the expense of agriculture.

The Land submitted questions to Whitehaven over the auction and use of water at its mines.

We asked: "Farmers are upset they are priced out of the water market, can't get water for ag production. They say you shouldn't be buying more water as you already have an allocation (over 600mL) groundwater a year? Where will you get this bought water from, a groundwater bore, or water that gets intercepted in mining? Will you be buying more water, was the eis flawed in that it didn't show what water you actually needed to run Maules creek and Tarrawonga. Will you need extra water for Vickery extension?"

Whitehaven returned with this response:

"We are not a large water user generally, and also not compared to irrigation. The region is in severe drought and it is prudent for us to take steps as a company to ensure continuity of supply using a variety of different mechanisms, in addition to those measures we adopt to conserve water for which we have existing entitlements.

"In FY18 our operations had total allocations of 9,978mL and we utilised a little over half of that allocation (and then recycled about 70 per cent of that figure). In the same period, Maules Creek used about the same amount of river water as one average-sized cotton farm, but it employs about 600 people and in FY18 contributed $117.5 million in State Government royalties. We recognise that water is a precious and scarce resource and that is why where we have surplus water we have periodically sought to share it with neighbouring landholders, as we have done at Werris Creek, for example." 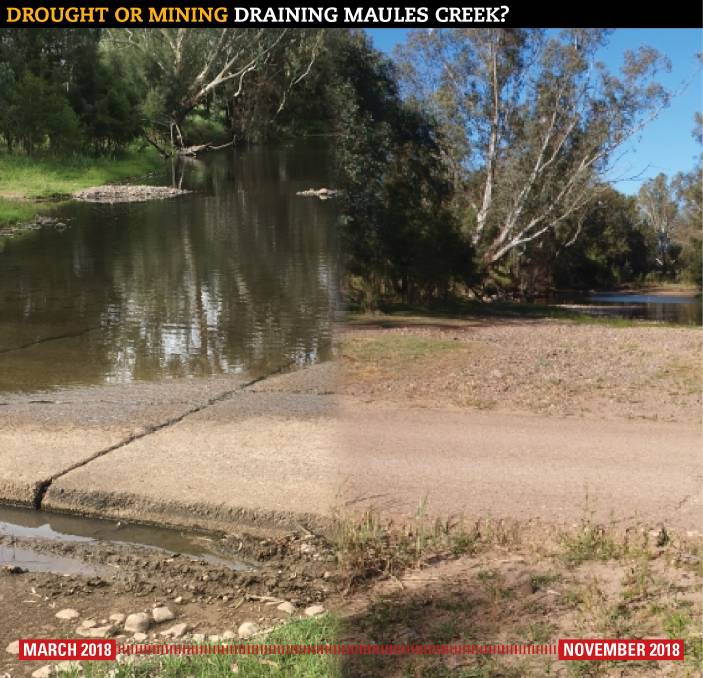