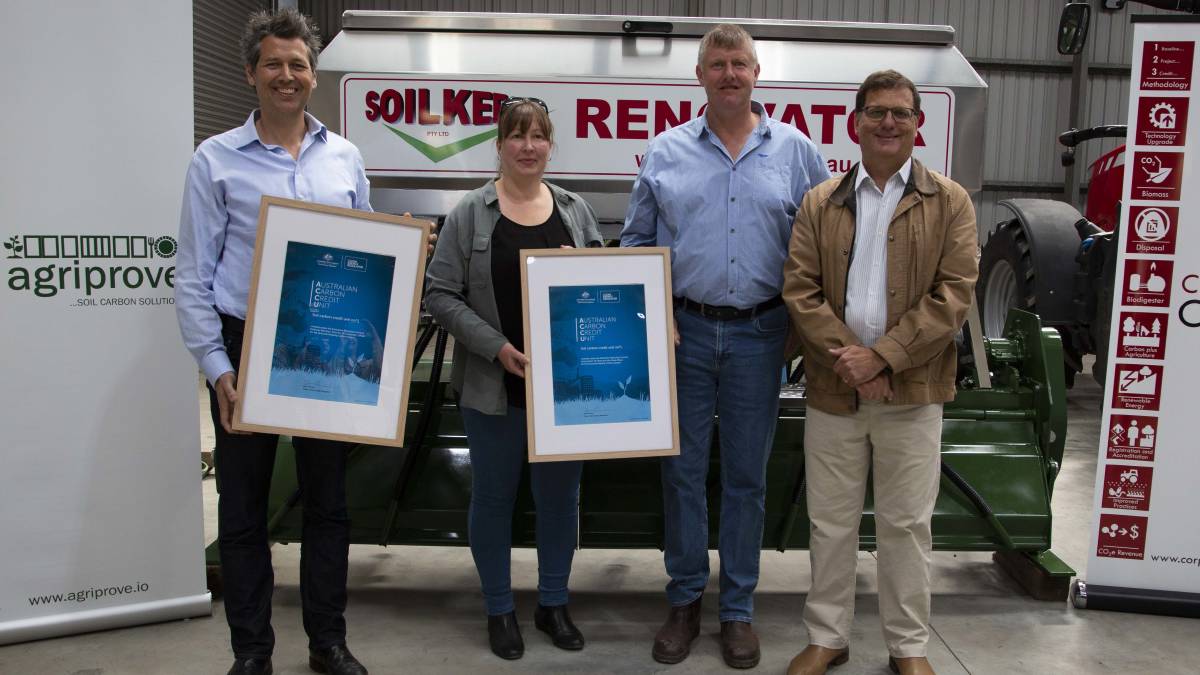 Soilkee's Niels and Marja Olsen and AgriProve's Matthew Warnken receiving their carbon credits. Photo supplied by the Department of the Environment and Energy.

Higher yields, better drought resistance and as a bonus the government will pay you for it.

It may sound too good to be true but West Gippsland farmer and inventor, Niels Olsen says these are the benefits of carbon farming.

The first in the world to receive soil carbon credits, Mr Olsen's project was approved through the Australian Government's Emissions Reduction Fund (ERF).

"It was looking like I was going to have a tax problem so when you're a farmer and you've got a tax problem you then spend it on fertiliser," Mr Olsen said.

But he found that no matter how much fertiliser he added, his paddocks were still browning off early in the summer. Chasing another solution he enrolled in soil chemistry courses and studied farming practices around the world, eventually coming up with The Soilkee system.

The Soilkee sows both seasonal crops and pasture seeds into existing pasture, using rotating blades to create competition free seed beds while leaving close to 80 per cent of the pasture undisturbed. The uncultivated pasture then acts as a cover crop and green manure.

"This increases the soil's fertility, bacteria, fungi and worm population 10 to 20 fold, which improves plant growth, meaning a larger root system is put back into the soil for building carbon," Mr Olsen said.

Mr Olsen argues the investment and effort of adding carbon to your soil may not have one element that makes it worthwhile but rather multiple added benefits that stack up.

The first one, water retention, in which he says in dry times moisture stays longer and recovers quicker than country with lower carbon levels.

"In West Gippsland here we can get three weeks further with ample growth into the driest period of the summer and then as soon as we get half an autumn break we're up and growing. In comparison it could be two or three weeks later before neighbouring paddocks start growing because their first rain has evaporated in two or three days whereas ours will stay in the soil for two or three weeks, giving us a head start of 2.6 tonnes of dry matter per hectare, as tested in Autumn 2018," he said.

Pasture yields also rose by 23 per cent over a year along with substantial increases in soil carbon, during an independent trial by Commercialisation Australia that looked at the benefits of the Soilkee system. ​

And now, there's the opportunity to earn money from selling carbon credits.

"It's a tradable commodity, under the government scheme you're providing your first X amount of credits. Then once you've produced a certain number of carbon credits you're on the free market and you can sell them to the highest bidder," he said.

The federal government guaranteeing $10 a carbon credit with one credit given for every tonne of CO2 sequestered. The Olsens managed to gain 11 credits per hectare but this amount is automatically cut in half, to be back paid in full when the project proves increases in carbon levels throughout consecutive testing.

The government also taking into account the period of time you commit to the project. These factors combined leaving The Olsens with four credits per hectare.

Despite the time it will take to receive the full financial benefits of their new found commodity, Mr Olsen says the sustainable productivity wins were already there.

"Farming has been destroying carbon for many years and here's an opportunity to turn that back around and make farming more efficient," he said.