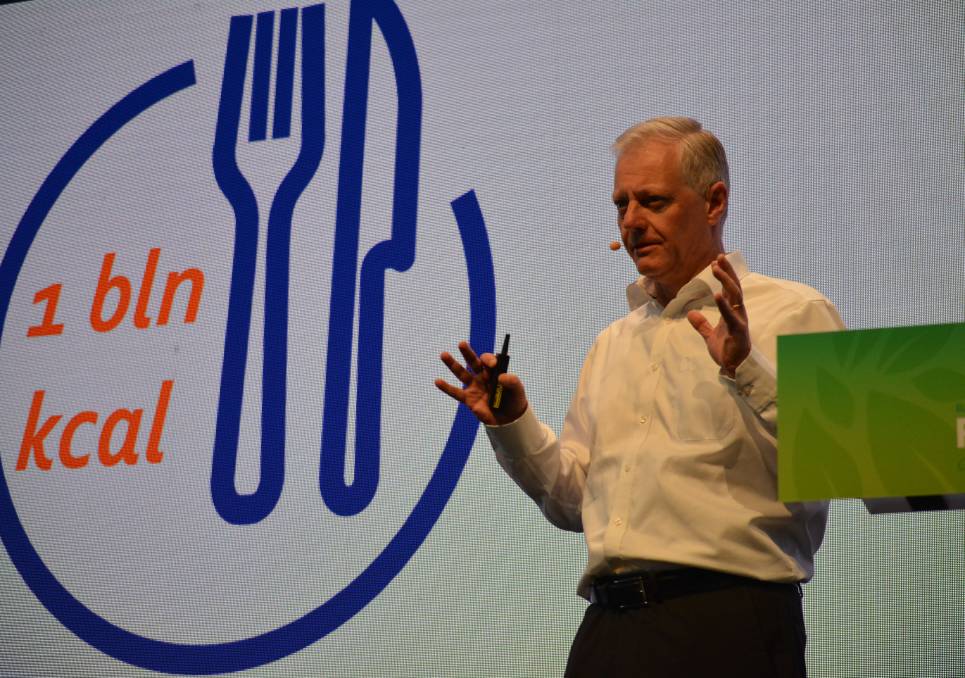 Member of Rabobank's managing board Berry Marttin explained to the Farm2Fork audience last month why people must start asking what is the nutritional value of their food per unit of carbon emitted.

Berry Marttin puts the numbers to the food-carbon cost at Rabobank's Farm2Fork summit and explains the importance of nutrient density.

A lot of people make food choices based on what they think is good for the environment, and therefore also makes them feel good, but often their choices are hurting the environment unnecessarily.

This was the underlying message of Rabobank's Netherlands-based managing board member, Berry Marttin's talk at last month's Farm2Fork summit, held at Cockatoo Island.

Mr Marttin, who oversees Rabobank's rural and retail portfolio and was formerly a farmer in Brazil, has also designed the Global Banking for Food Strategy for the bank.

"Let's start measuring the right thing," Mr Marttin said, as he opened his talk. "We only have one planet, okay."

He said "those people" (i.e. our world leaders) that agreed on the Paris Climate Agreement set the rules and guidelines that we will have to abide by in the coming years.

"Why that is so important and so relevant, is agriculture is the second most polluting process in the world, after energy," he said.

So what does this all mean - well, it is all about numbers, according to Mr Marttin.

"The other thing that they (the Paris Climate Agreement folk) have said ... (is) if we want to limit the increase of temperature by two degrees, food production can not emit more than four megatonnes.

"Do you see the challenge? It's coming.

"Today we talked a lot about world population - we have to produce more. But Paris is saying 'no, no, we can only emit four megatonnes'".

He said the gap that our food producers will have to overcome is to lift from the current 13 trillion calories to "20-something trillion calories", in 30 years time, which is an increase in the realm of 50-60 per cent.

At the same time, food production will have to go from 12Mt down to 4Mt of carbon output.

"Every calorie produced has to be four to five times more efficient," Mr Marttin said.

"So we have to understand, what are we going to do? What are we measuring?"

He said a lot of current reports are measuring how much emissions per gram, or kilogram.

"But the issue is that we don't live by kilos. We survive as humans by calories."

He said if you look at it from a calorie point of view, it painted a clearer picture of the amount of carbon output along the whole supply chain versus what calorific value you obtained from that food - and also better reflected the amount of processing.

He used milk as an example (with findings from the report Nutrient density of beverages in relation to climate impact, by Annika Smedman et al), as it was consumed by 6 billion of the world's 7.7 billion people.

It had lots of "pretenders" competing for its market share, such as plant derived "milks", many of which sold themselves as healthy alternatives.

He said the Australia-New Zealand region did have the lowest output of carbon in the world per litre of milk produced.

"If you look at 100 grams of milk, it produces 100g of CO2. But if you look at the most important thing, which is actually the nutrition density of milk, it's 50 (nutrients that we need daily).

"It's a very high nutrition density."

"So are we measuring the right thing? Nope. Are we telling the right story? What's better? Milk, or soya drink?

"Is the industry telling what is better for the environment?"

He said if you correlate the emissions with the nutrient density, you get a clearer picture of nutritional value against emissions output.

Mr Marttin said people must start asking what is the nutritional value per amount of carbon emitted, or else food production from farming will never get to the four megatonnes target.

And, as a society, if we don't understand that, we will continue to make the wrong decisions and produce foods that are actually not nutritious and be emitting carbon in the process.

He said it takes, on average, about 2.5 tonnes of CO2 to feed one person per year, and he estimated that if carbon was priced, it's value would be about US$100/t.