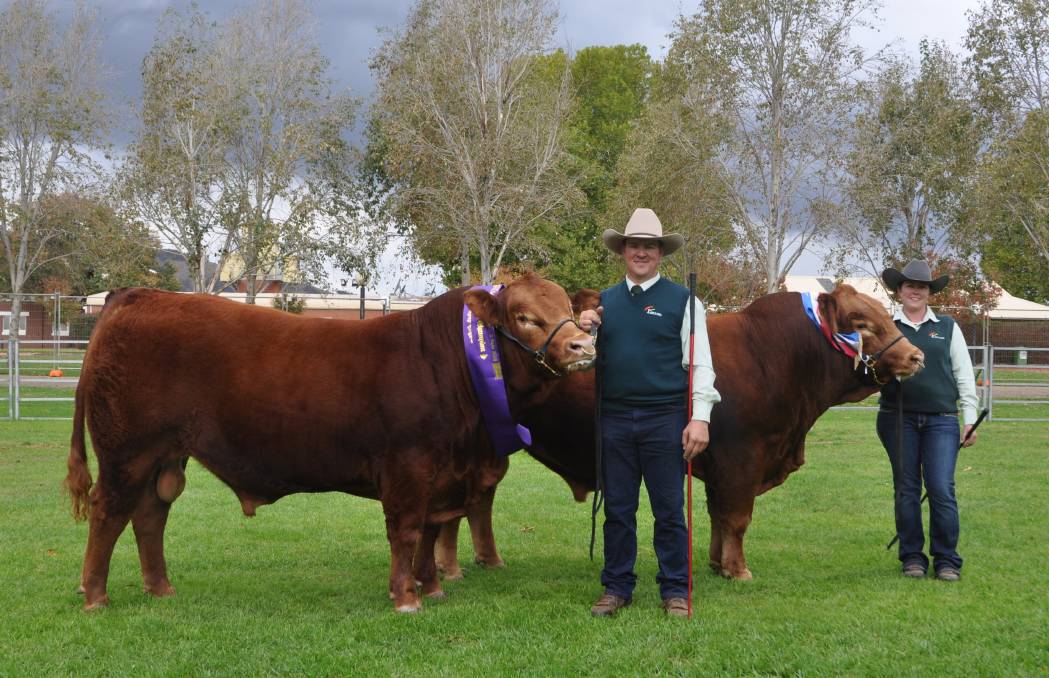 Judge, Peter Collins from Tennyson, Victoria, said it was the bull's structural correctness and overall type that made him stand out.

"The bull was an all-rounder, he's going to breed really good cows and bulls, he'll be a good steer producer too, he was the type of animal I was looking for all day," Mr Collins said.

Donna Robson of Flemington Limousins, said the bull had recently won his class at the Sydney Royal Show.

"His pedigree is a bit unique, he's by a Canadian bull Greenwood PLD Zambuka, who not many people have used, but we've had a lot of success with him in our program," Ms Robson said.

It's not the first time the stud has seen success at the national show, which they aim to get to every two years. In 2017 they won grand champion bull and topped the sale while in 2015 they were awarded supreme exhibit.

The stud, owned by Hayden and Jasmine Green, also took out the Michael Tynan Memorial Prize for their group of three bulls.

The ribbon backed up their prior success in the females. The Victorian stud took out the grand champion female with their junior champion,19-month-old heifer Macorna Nancy Rachel.

Mr Collins said he knew it was always a bit radical to choose a heifer over the cow and calf.

"But she just had great structural correctness and a softness as well as meat in her too, she had femininity and that wedge shape that I was after, she's good through the front end and really solid through the back end," Mr Collins said.

Murray Van der Drift of Macorna stud said he was over the moon with the win.

The heifer beat out a strong competition from the senior champion female, two and a half year-old cow, Garren Park Josette shown by Gary and Karen Hedger from Garren Park Genetics at Culcairn.

Summit Livestock saw wins in the females as well as the bulls. The champion ribbon for a heifer calve was awarded to 14-month-old, Summit Magic, while the champion senior female went to Summit Mimi.

Mount View Orchards was represented in the females, with the ribbon for junior champion bull given to Flemington Not A Chance.

Also taking the reserve champion ribbon in the female calves with Flemington Royal Regae, by the same sire as the supreme exhibit, Greenwood Pld Zambuka.

The show will be followed by the national sale on Friday, May 3rd.