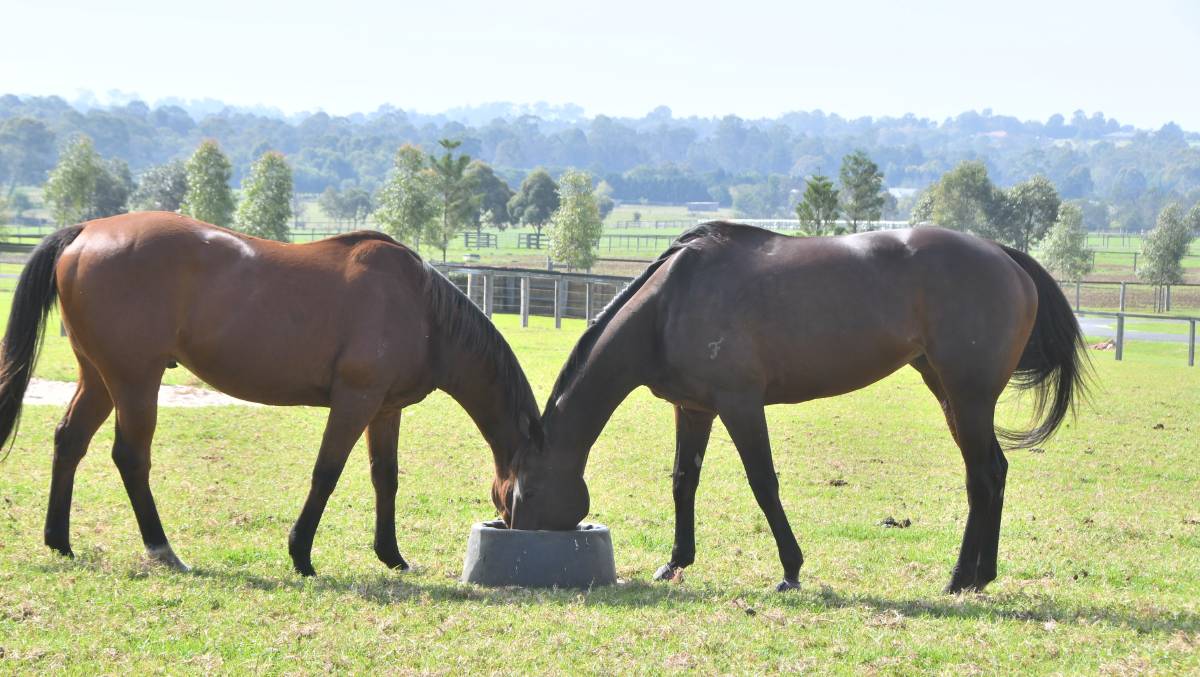 Gelding, Kaiwah and his new mate Winx happily sharing a feed tub in a paddock at Hermitage Thoroughbreds at 'The Oaks'. Photo: Virginia Harvey

At home at 'The Oaks' Winx finds a new mate.

WHILE researching a recent story of a silage donation - homegrown and produced from Hermitage Thoroughbreds at "The Oaks" - The Land's Thoroughbred correspondent, Virginia Harvey, was happily confronted with a wonderful site of mighty mare Winx leisurely grazing in a paddock with her new "mate" the gelding Kiawah.

Being a long-time Thoroughbred lover, it was also such a bonus for me to see her looking so happy and contented that day after bringing such joy to her owners, connections and millions of fans not only around Australia but across the globe.

For a horse that has not seen the stars since a three-year-old, and not had any "free" horse-touching time, it was heart-warming to see her in a relaxed paddock atmosphere.

Taking it in her stride, she was freely mingling with her new found friend sharing the same paddock, this being a whole new way of life for the $26 million earning racemare.

According to Olly Koolman, racing manager of Hermitage Thoroughbreds, it was only the second day Winx and Kiawah had been in the paddock together.

"He (Kiawah) is very laid back and plays as nanny sometimes to our young horses," said Olly.

When training at Rosehill, Olly had prepared the now 18-year-old Desert King gelding who won four races and had 10 placings for $103,240.

Olly and I could see Winx happily mooching around with Kiawah, being totally relaxed, grazing, and reverting to the natural horse habits of nuzzling and mutual grooming normally displayed by contented horses.

They had obviously come to some "horsey arrangement" that only the pair could understand.

"My observation of seeing her siding up to Kiawah while eating and sharing the same feed bin at the same time, indicates to me that she will ably take on her new role of being a mother," said Olly.

"She has fondly taken to Kiawah very quickly."

This is just a taste of reality for the seven-year-old mare, the owners yet to decide and announce which stallion she will visit this year for her maiden season at stud.

Meanwhile, the Australian Turf Club announced this week that Winx will be permanently immortalised at Randwick Racecourse with a new public spectator facility to be built and named in honour of the mighty mare.

To be erected alongside the Queen Elizabeth Stand on Randwick's Leger Lawn, the stand is to cater for 5000 spectators, and is hoped to be opened for the running of The Everest in October 2020.