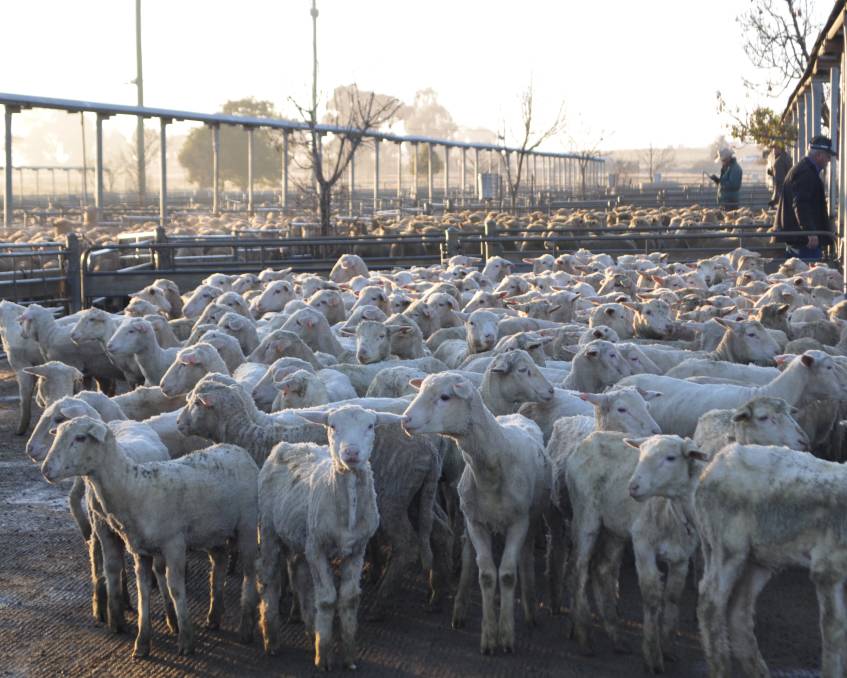 THE big prices paid for heavy prime lambs is the topic of chatter at the saleyards, but the more astute observer may also have noticed a significant shift in the value of store lambs.

"During the past five to six weeks the store lamb prices have escalated to prices we may not have seen before," Mr Whitty said.

He said the market was reflective of a dramatic shift in the industry.

"I think they've created a big demand for store lambs, to be able to keep those feedlots full."

Trading early this week indicated the lamb market was a tad softer, but certainly still much higher than this time last year.

On Tuesday the restocker lamb indicator in NSW was on 807 cents a kilogram (carcase weight) which was about 315c/kg higher than this time last year. At the same time, light lambs hit 766c/kg, which was about 133c/kg dearer than early June 2018.

Agents said one of the main drivers of the store prices was the heavy lamb market.

"The prime lambs are making up to 900c/kg or 1000c/kg at the absolute top end so there's demand to buy those store lambs, put them on feed and supply the (prime lamb) market later," Mr Whitty said.

He said it's a market we wouldn't have dreamed of a few years ago, but estimated prices had nearly doubled.

Christie and Hood agent, Paul Alchin from Dubbo said there was also demand from producers who had below average lambing rates in their own mobs due to the season.

"There's been some people there that have been looking to top up their production numbers through buying store lambs," Mr Alchin said.

Mr Alchin said the store lamb prices have been strong now for at least 12 months, but had peaked in recent weeks.

But it's not good news for everybody. Michael Fitzsimmons, a buyer for the Junee abattoir said it could effect the processor's volume of trade.

"The market has been red hot, it's at unprecedented levels for all weights and grades, from your lightest lambs through to your heaviest mutton and in between," Mr Fitzsimmons said.

"It effects your ability to move the product, your bottom line, if it gets too dear, and it's too dear now, it can effect your volume of sale which results in a winding back of numbers and profitability of the business."

Mr Fitzsimmons said they had continued to buy in store lambs because it helped the business' supply chain and it still had the opportunity to value add in the feedlots.

But he said it was getting to the time of year where buying in store lambs was not as attractive.

"A lot of lambs at this time of year are getting advanced in age and we don't have that time to be able to finish them the way we want," Mr Fitzsimmons said.

"Some people into the near future will play with caution because lambs are going to be getting a bit too old," Mr Whitty said.

"They'll be wary of buying a very expensive store lamb because if it's going to be carried on for too long they'll miss the peak of the market."

He said considering the input costs involved with producing heavy lambs, the prime lamb market would have to hold to gain substantial profit margins for restockers.

"There's some big bucks being spent, with the price of store lambs and then the cost of feed, hopefully the market stays stable enough that those people do get that profit margin," he said.

Sponsored by
Numbers were back at Friday's store sale.
Test
So far Belmont Red cattle semen and Timor Pony semen has been stored in two centres.
Test
Independent gets Turnbull's nod in by-election
Test
Rushing sorghum to receival depots before mice move in
Test
Bargains found for those who braced the weather at Braidwood.
Test
Liming paddocks needs to address effects deeper in the soil.
Test
Trigger point for Menindee Lakes reached - MDBA to take the reins
Test
Conference for bushfire-affected schools offers time for reflection.
Test