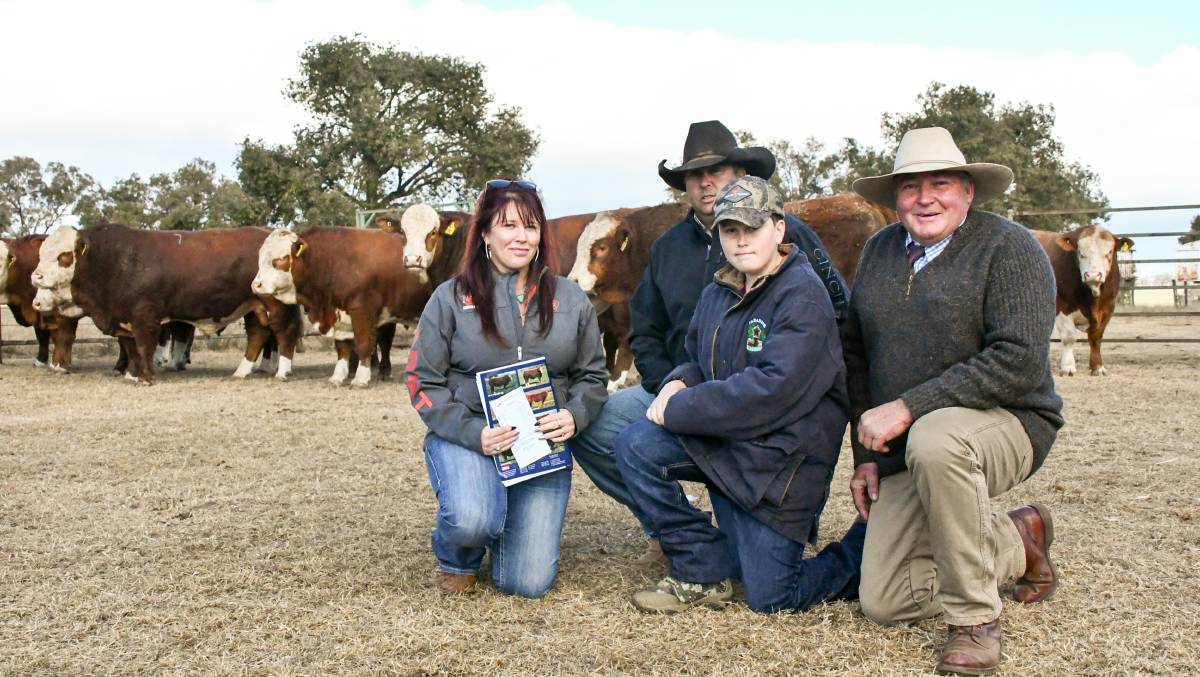 Those with crops or promising seasons supported the sale.

But it was their purebred commercial heifers that attracted the most attention and saw all seven sold to average $1692 and top at $1800.

Mr Cook was hoping to clear at least 50 per cent of the catalogue but didn't have the support of their usual local buyers due to the season.

"I was happy enough considering the situation because most of our local clients here, about 75 per cent of them, sold all their cows and we usually sell 15 or 20 bulls locally and we sold one," he said.

"The bulls were probably a very even line of soft middle of the road bulls that scanned really well for EMA (eye muscle area) and fat.

"Pity we didn't have a few more of those (commercial heifers). There has been a bit of interest in those." A portion of the crowd during the annual sale.

Bulk buyers on the day were Paul and Mollie Agostino, Malongulli, Canowindra, who attended the sale for the first time and returned home with six bulls averaging $4666, all by Woonallee Jumbo.

At 23 months, Nightshade weighed 856 kilograms with P8 and rib fat depths of eight and six millimetres. He recorded an EMA of 130 square centimetres and an average daily weight gain of 1.2 kilograms/day.

Nigel was 22 months and weighed 802 kilograms with P8 and rib fats of seven and five millimetres and an eye muscle area of 127sq cm.

The Agostino family operate a crossbreeding operation on 8500 acres, turning cattle off to either the feeder or supermarket trades.

They traditionally used Limousin bulls but Mr Agostino said they now split their sire battery between Simmental and Limousin genetics.

They were looking for not only value but also structural correctness from their bull purchases.

"We wanted cattle that would walk, our country is a bit hilly," Mr Agostino said.

"We were in the market for six, seven or eight bulls. We have got a few older bulls to trade in so it's a good change over price.

"The season is okay to good. An inch this weekend and it will be better."

Bidding gained momentum at the commencement of two lots of purebred commercial heifers.

The first offering of three unjoined poll daughters of Woonallee Jumbo was secured for $1550 each by a Bathurst based buyer through AuctionsPlus.

The second lot of four polled Woonallee Looking Glass daughters sparked a seesaw of bids between an AuctionsPlus buyer and Damien and Matt Pittman, Wahroonga, Loomberah.

In the end the Pittmans secured the heifers for $1800 each who were bound for their cattle, sheep, cropping and hay operation.

They also took home two stud females during the auction, and an additional heifer purchase after the fall of the hammer.

At the end of last year the Pitmans reduced their commercial Simmental herd down to about 90 breeders, but some promising crops have now allowed them to reenter the market.

While they had bought Barana bulls for the last six years, Damien Pittman said this year they were just chasing females.

"We have eaten off all our early stuff and we just need an inch to keep everything else going."

An additional two bulls were also sold at the conclusion of the sale.

The auction was conducted by Elders and Davidson Cameron and Co with Paul Dooley, Tamworth, as auctioneer.