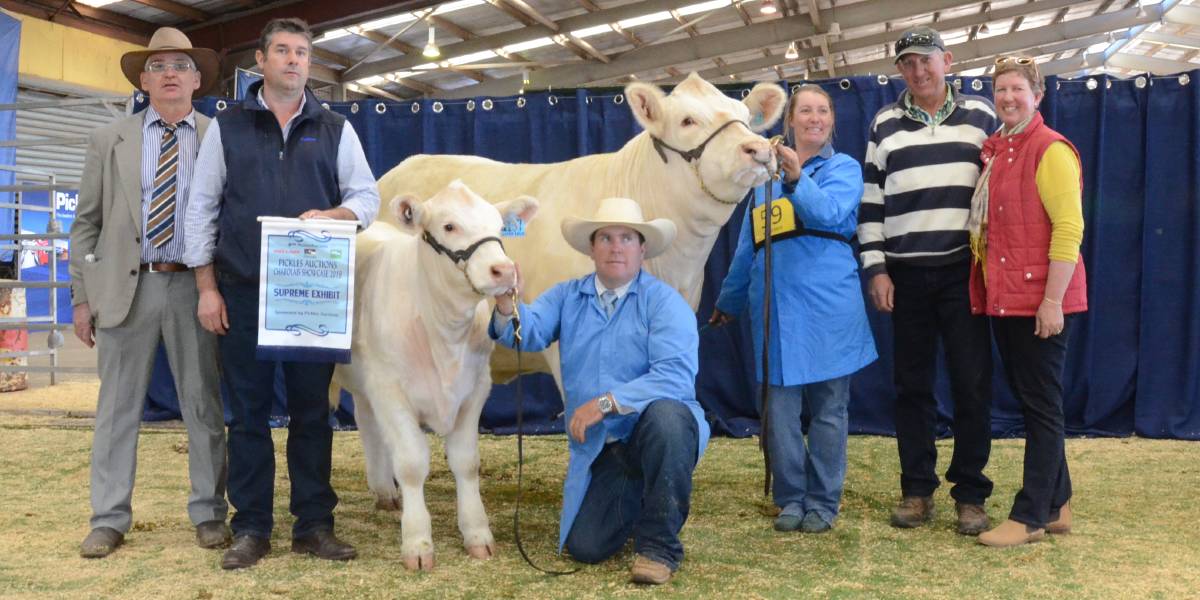 A 45-month-old cow with a cracking heifer calf at foot took out senior and grand female championships and then defeated the grand champion bull for supreme exhibit at the 2019 Pickles Auctions Charolais Showcase at Dubbo showground on Friday.

Wakefield Amaze 38 impressed the judge, Gary Wilkinson, Columbian Poll Herefords, Binnaway, with her excellent depth and muscle combined with all the femininity that made her an impressive Charolais matron and a grand example of what the breed can produce.

The Advance Domino D36 daughter was exhibited by Greg and Jenny Frizell, Wakefield stud, Wollomombi and one of 61 stud females and 26 bulls exhibited by 25 breeders from three states.

Amaze stood against the senior and grand champion bull to gain the supreme accolade.

This was DSK Kind-A-Neat, shown by Chris Knox and Helen Alexander, DSK stud, Borah Station, Coonabarabran, a son of ANC Kind weighing 948 kilograms at 20 months carrying an eye muscle area (EMA) of 137 square centimetres and 15 millimetres of fat on the rump plus 8mm on the rib.

Reserve senior champion female award went to Myona Ginghi K1 (P), runner-up to the senor champion in their over 6 months class and with a bull calf at foot shown by Beverley Hogland and Stephen Martin, Myona stud, Coonamble.

Reserve junior bull was the 12 to 14 months class winner DSK CMLD Profit (P), shown by DSK stud who also exhibited the reserve senior champion DSK TGL Nockup (P) which stood second to the senior and grand champion in their 20 to 22 months class.

The first was the red factor Elite Estella P4 (P) by Palgrove Kandoo bred and offered by Kim Groner and Glen Waldron and purchased by Daniel and Nikki Ferme and family for their Gotta Do Well stud, Crystal Brook, South Australia.