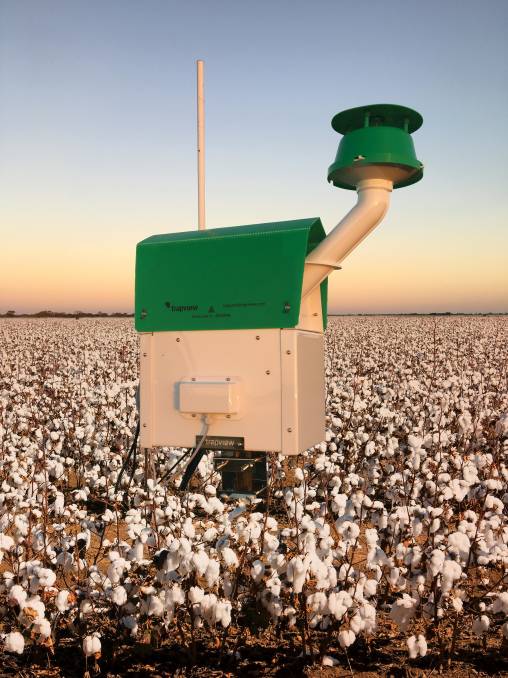 Trapview is a remote pest monitoring system that can identify how many pests are present and where they are at in their life-cycle. Photo supplied.

Growers could soon be able to predict when an insect flight is coming without leaving the office, with new technology Trapview being trialed throughout the Northern Basin by ADAMA.

"The trap has a pheromone lure that attracts a particular insect, the insect is then captured on a sticky pad," Mr Phelan said.

"A photo is taken and sent to the cloud where Trapview technology processes the image and gives you a count of how many pests were found in the trap."

Mr Phelan said Trapview could also inform growers where the pests' life-cycle was up to.

"It has a temperature and humidity sensor so it can count degree days and therefore we can track a life-cycle in the software," Mr Phelan said.

He said the most exciting part of the technology was that it could be used to create a network of pest pressure across different properties and regions.

He said by pooling the information in this network they could predict when the pests would appear in the next paddock, valley or region.

"A Trapview network has been tested pretty successfully in Europe," he said.

"We also started to trial a network in southern Australia last year and the data we got enabled us to predict, a couple of days out, that there's going to be a flight of a particular pest.

"We've got really good success with capturing Helicoverpa in pulses and Green Mirid in cotton."

Although Helicoverpa and Green Mirids would be targeted in trials, Mr Phelan said because it's a pheromone trap it could lure any insect if there is a pheromone available.

He said the system would both save time and inform more timely applications of insecticides.

"It's a labor intensive approach for growers and agronomists to constantly go out and sweep and inspect for these pests," he said.

"We can save on that constant, widespread monitoring in the paddock but when growers do see activity through Trapview they can intensively search for that pest and organise a spray when it hits critical levels."

ADAMA began trials of the system in Australia last year and this season are looking to roll out a denser network of the devices.

"We put about 50 traps into the Gwydir and Namoi last year, we'll be looking to increase that to 100 odd traps this year," Mr Phelan said.

He said ADAMA would invest in the network and cover costs through subscriptions.

The company aims to release ADAMA Trapview Network commercially in the 2021 to 2022 season.