The Douglas brothers travel from Woolomin in northern NSW each year to compete at the Australasian Dorset Championships in Bendigo. 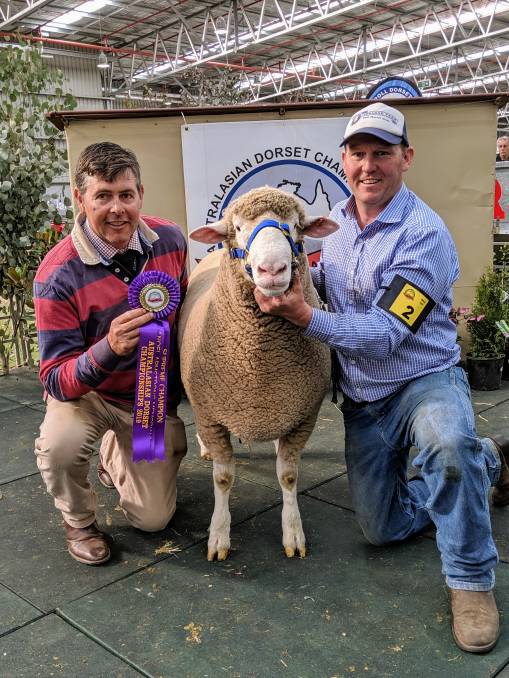 The Douglas brothers travel from Woolomin in northern NSW each year to compete at the Australasian Dorset Championships in Bendigo, racking up more than 2000 kilometres in the process.

And while they are often rewarded in the sale ring for their effort, this year they also received the top gong in the show ring.

Abelene Park 183-18 was awarded junior and grand champion ram as well as supreme exhibit of the show by judge Sascha Squires from Dongadilling stud at Quairading, WA.

Mr Squires said the wooly ram still had its lambs teeth, and was a "magnificent ram".

"It's got magnificent growth, very stylish ram, great topline and carries plenty of flesh over the loin and down the hindquarter," he said.

The August-drop sire won its age group's wooly class first, before going on to trump all the older exhibits to be sashed champion and then supreme exhibit of the show, before selling for $10,000 on Sunday.

As of the end of August, the ram weighed 151 kilograms, had an eye muscle area of 45 square centimetres and scanned 8 millimetres of fat.

Marshall Douglas said they had good hopes for the ram, as he'd always been a standout lamb.

"His grandsire was top price here two years ago, and was shown in the same class, coming second and then selling for $12,000," Mr Douglas said.

By winning champion ram at the event, Abelene Park 183-18 was then eligible to compete in the inaugural WFI Champion of Champions competition, where 12 of the winning rams from major shows across the country went head to head for $3000 prize money.

Abelene Park placed second in that competition, just one point behind the champion from Tattykeel stud, Oberon, NSW.

"I think it is fantastic for WFI to put that up to encourage breeders, from where I was standing that line up of rams was fantastic and to be able to get into the top three of that with a milk tooth ram was quite a thrill," Mr Douglas said.

Abelene Park also exhibited the champion intermediate ram of the show, 15-18, a June-drop ram which went on to sell to Bygo stud, Tullibigeal, NSW, for the top price of $11,000 in Sunday's sale.

The Frosts of Hillden stud at Bannister, NSW, took out both the broad ribbons in the champion Poll Dorset ram lamb judging, winning champion with their April-drop shorn ram, and reserve with their April drop wooly.

Mr Squires said it was a toss up between the two rams, who both had a great outlook, were good on their feet and had plenty of muscle.

In the senior rams, it was Mallee Park 36-18 which Mr Squires chose as his champion, saying it was a "very powerful ram, great topline, great outlook, stands extremely well and when you put your hands on him he's full of meat".

The Fergusons of Mallee Park at Hopetoun also placed third in the Champion of Champions judging with that ram, which was eligible for the competition after winning at Hamilton's Sheepvention in August.

Reserve senior ram was exhibited by the Scott family of Valley Vista stud at Coolac, NSW, with 344-18, an exhibit which stood second in its class to the champion ram.

Mr Squires described it as another powerful ram with a great topline and beautiful head.

Valley Vista also exhibited champion ewe with 334-18, after it won the ewe under 1.5 years in wool class.

The ewe was previously supreme short wool interbreed exhibit at the Canberra Royal in February, and then reserve champion Poll Dorset ewe at the Sydney Royal in April.

Mr Squires said the ewe had a great outlook and was very correct.

Reserve champion ewe was Rene stud, Culcairn, NSW, with their ewe under 1.5-years-old closely and evenly shorn and Mr Squires said it was a "beautifully stylish ewe that still carries the muscling down the leg".

The ewe was also reserve champion Poll Dorset at the Canberra Royal.