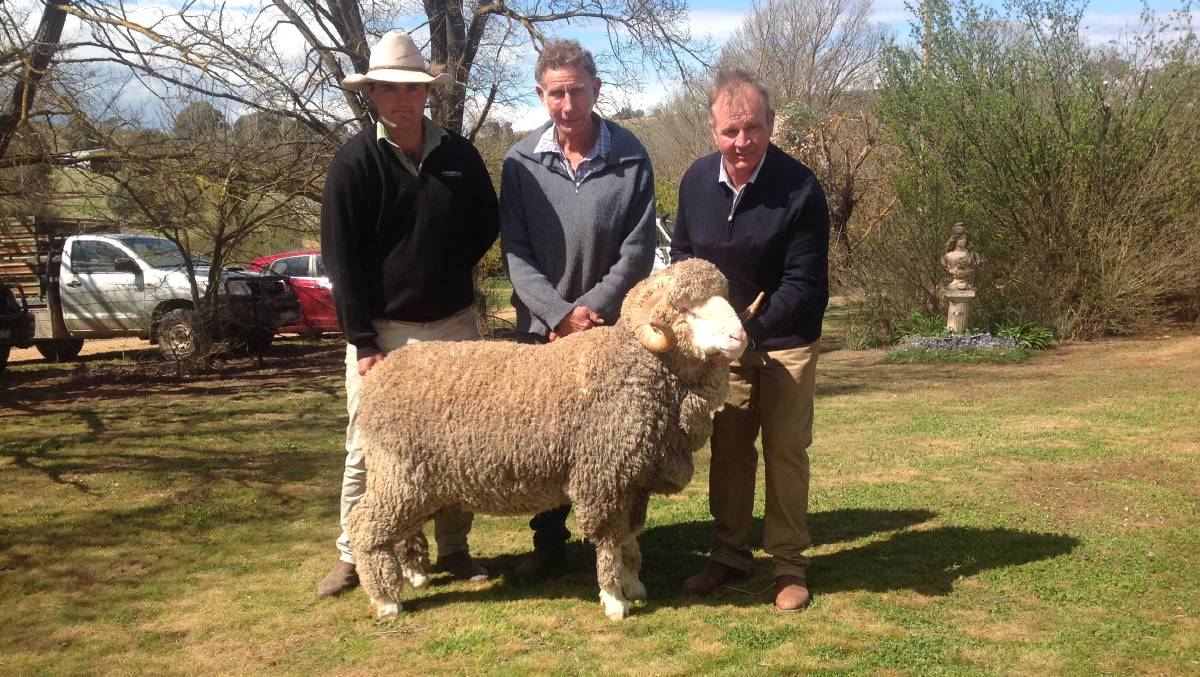 A near clearance saw Guy Evans sell 103 Merino rams at Boorowa for $2550 average.

The top priced ram, a grandson of TP4339 was purchased by Michael Green, Boudjah, Cooma.

Mr Green has used Tara Park genetics in his stud for some time and is impressed with their performance.

"He has a beautiful sweet wool, soft and bright," he said.

"The Tara Park genetics are compatible with ours and we've seen them perform on Boudjah through all seasons.

"The strength of the Tara Park breeding can be seen in the ram, he has a strong head, is well balanced, is strong behind and has a good underline."

With the recent purchase of the top priced ram from Yarrawonga going to Cottage Park, Cooma Mr Green made the comment the two leading show rams at the recent South West Slopes Stud Merinos show at Harden are heading for the Monaro.

Chiming in at $6000 was the purchase of son of 104 made by Hollow Mount Pastoral Co, Bigga.

Other good sales included one at $5750 bought by Roberts Wool, Launceston, Tasmania: one at $4,750 bought by Demondrille Partnership, Harden and one at $4500 purchased by D and J Rentsch, Hamilton, Victoria who selected a draft three rams for average price $3750.

Other Boorowa district woolgrowers who made multiple purchases included the seven rams for average $2678 made by J.R and C.L Gay, Reids Flat; D.J and K.F McGrath who added four rams at $1812 apeice and Bruce and Narelle Nixon who also added four rams to their Tara Park-blood flock at $2937 average which included two at $4000.

The Nixons were successful this year in winning the Boorowa District Maiden Merino ewe competition before going on to take the award in the Southern Tablelands Maiden Merino Ewe Competition.

Studmaster Guy Evans was very pleased with the appreciation of his genetic direction which was reflected in the many return clients but also the number of new buyers.

"People continue to be positive and that was reflected in today's prices," he said.

"I'm pleased to be able to satisfy the demand for heavy cutting rams with soft and long stapled fleeces."

The sale was held by Elders and Landmark, with Rick Power, Landmark wielding the gavel.