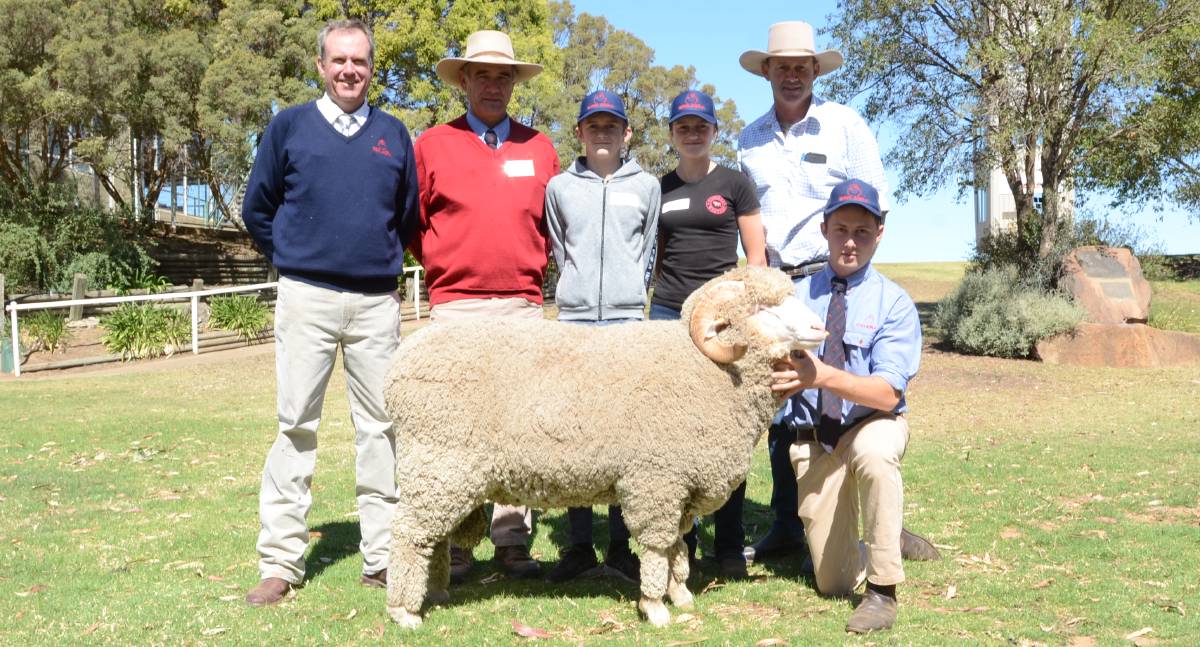 Bidding was fast and furious at the 36th annual Egelabra Merino stud sale at Warren on Wednesday.

IF anyone in the crowd of 200-plus sitting or standing in the sale area, especially bidders, looked away for just a second, they would have missed any one of the 146 stud rams knocked down for sale by guest auctioneer Paul Dooley, during the 36th annual Egelabra Merino stud sale at Warren Showground last Wednesday.

The auction at Warren showground moved through the catalogue in a well-timed, but fast pace, resulting in a total auction clearance and a $2699 average.

Stud owners, the Kater family of Warren, were ecstatic with the strong support afforded them by returning clients, new and old. from Queensland, Victoria and widespread areas of NSW who paid an average of $6938 for the eight specially selected rams and $2453 average for the remaining 138 stud rams. Attracted to the very rich 20 micron wool growing on the first ram of the catalogue, David Lowe, Yoorooga, Yeoval, with his Gerar Station, The Marra, manager, David Motley, selected the 106 kilogram future sire for use within the 5000 ewe flock, outbidding all to pay top price of $18,000.

The company has been on Egelabra blood for generations with Mr Lowe saying the rich wool produced by Egelabra rams was pretty handy with wool prices the way they are.

"The Kater family has contributed a lot to the Merino and wool industry for generations and especially at present for their continuation of the Egelabra jackaroo program," David Lowe said.

"When we buy Egelabra rams we know what we are buying because of their consistent type." The sale-topper recording Merino indexes of 118.3 for Merino+ (M+) and 125.2 for Dual Purpose+ (DP+), was sired by Egelabra 14.0880, described as a good free grower and the best performing sire with 22 of this year's progeny selected in reserves and sale, plus producing two special sires.

Womboin Station turned to Egelabra in 1986 for its production of sheep with soft-handling medium wool that suited the Womboin country, according to Mr McGrath.

They joined 5600 ewes growing 19 to 20 micron wool this year and cutting seven to 7.5kg of wool in average years.

Andrew McGrath said Womboin Station clients returned each year for classed out ewes and the big wethers, many of which head to repeat buyers in Victoria who keep them as woolcutters.

Elder's Dubbo Merino specialist purchased the third top-priced ram at $7000 over the phone and on behalf of Robert Hain, Gunyah stud, Cooma, a daughter stud which has been breeding the Egelabra Saxon blood sheep for three generations.

"We want to get our wether lambs off earlier and these rams are doing it. We want good weights with early maturity," he said.

Jeff Nuthall, Dutton Park Pastoral Company, Young, said the family had been on Egelabra blood for 40 years because rams breed the Egelabra recognised type of sheep.

"We buy Egelabra because people know progeny are always consistent due to the generations of consistent type bred at Warren," Jeff Nuthall said. "It's a great stud to work with and now with the drought their sheep are worth their weight in gold.

"The Katers haven't chased rainbows or the next fad, they've stuck to their type."