Grace Brennan and Kim Burnheim show off some of the online goodies available on #buyfromthebush. Photo: Mark Griggs

Forget online shopping from the major outlets this Christmas and support retailers that come from our drought-stricken heartland.

Buy from the bush is powerful in its simplicity.

But it's about so much more than stimulating the coffers of our regional economy in this prolonged dry, it's about boosting morale in the bush.

What started as a hashtag on social media has given hope to bush retailers with some recording sales that have doubled their annual income in just two weeks.

Grace Brennan, the brainchild behind the @buyfromthebush campaign, says it encourages people to buy locally to help communities from West Wyalong to Walgett that are affected by dry conditions.

"My husband is a farmer and I have witnessed our little community suffering a lot over the last year or two and wanted to do something," Mrs Brennan said.

The campaign started when she shared an article on Facebook about how businesses were being affected by drought and encouraged her friends to check out the local boutique in her hometown of Warren.

"A friend of mine said thanks for sharing and that her family were doing a buy from the bush theme for Kris Kringle, which planted the seed," she said.

Mrs Brennan, who has a background in community development and runs AgDraft, an agtech start-up, created an Instagram page showcasing a few local retailers.

That was just three weeks ago. Now the @buyfromthebush campaign has 80,000 followers on Instagram and 85,000 on Facebook.

And they have just created the @stayinthebush page to get people traveling to regional centres.

Related reading:Ladies of the Land Christmas pamper packs give hope

"It's working well for a number of reasons as there is no shortage of creative products being showcased and people enjoy knowing exactly where their money is going to and what impact that is having," she said.

Speaking to businesses, Mrs Brennan said they had made more in two weeks than they had in the last financial year, some more than doubling their annual income.

"The long-term outcomes are incredible as jewellerymakers and artists are being found by retailers and wholesalers who want to stock their stuff," she said.

"They are building their capacity to leverage social media into the future, which is exciting and it's creating opportunity to access new markets without the huge expense."

She says once the drought breaks, and it will, they want to keep businesses open.

"I created the page one morning after I heard an interview between the Prime Minister and a journalist, and what wasn't being talked about was the need to keep rural communities going," she said.

"We always hear about farmers and agriculture businesses but what's at stake if those ag businesses decline, is those other businesses that feed off them.

"Most people have great faith that the Australian ag industry will keep driving efficiencies and somehow survive this exceptional drought.

"But people are leaving town and doors are closing so we need to take action to stop that from happening in the short-term." 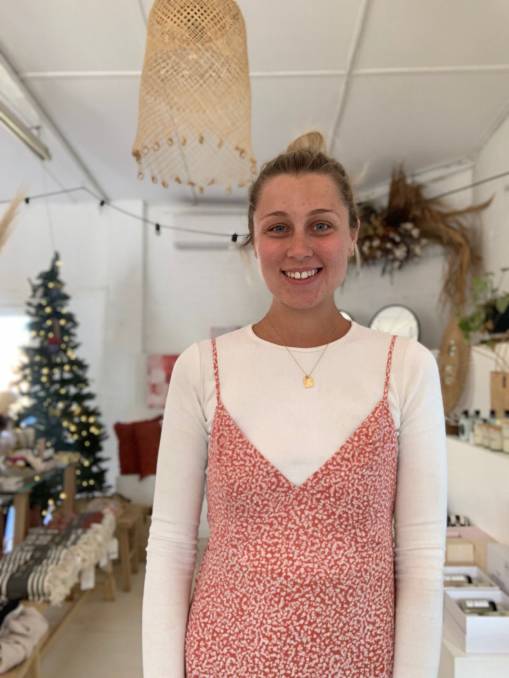 Lottie McCutcheon from The Studio at Trangie says the #buyfromthebush campaign had changed the outlook of her business.

Among businesses featured in the @buyfromthebush campaign is Lottie McCutcheon's The Studio at Trangie, a collective hub for all things creative including Lottie Rae Art Studio and cafe.

Mrs McCutcheon who moved to Trangie for love started her business two years ago. Since being part of the campaign, she had been inundated with orders from Sydney to Brisbane.

"Normally we would post a package out once a month, now I'm doing 10 a day it's unbelievable," she said.

"It has changed the outlook of the business, it has given us a leg up to keep going."

Another business owner benefiting from the campaign is Kim Burnheim who runs Note Couture with her sister Amy Smith, which is a personalised stationary and greeting card online business.

The sisters, who are respectively a farmer/teacher from Quambone and an agronomist from Condobolin, bought the established business five years ago and revamped it.

But Mrs Burnheim the @buyfromthebush campaign had connected them to a wider audience and given them massive marketing exposure.

"In the last two weeks we have generated a far greater income than we had in the last financial year," she said.

"We are so grateful for the work @buyfromthebush has done for small businesses in our rural areas."

NSW Business Chamber CEO Stephen Cartwright said Australians right across the country were keen to help rural and regional communities that were being hit hard by the drought and the campaign was giving them that opportunity to show their support.

Mr Cartwright said there were about 400,000 micro businesses in regional NSW, which were the lifeblood of regional cities, towns and villages, many with just an online presence.

"We can't make it rain but we can use our buying decisions to help businesses in the bush keep the lights on and pay their bills until the drought is finally broken," Mr Cartwright said.