Superfine holds up as some Merino fleeces fall by up to 80c. 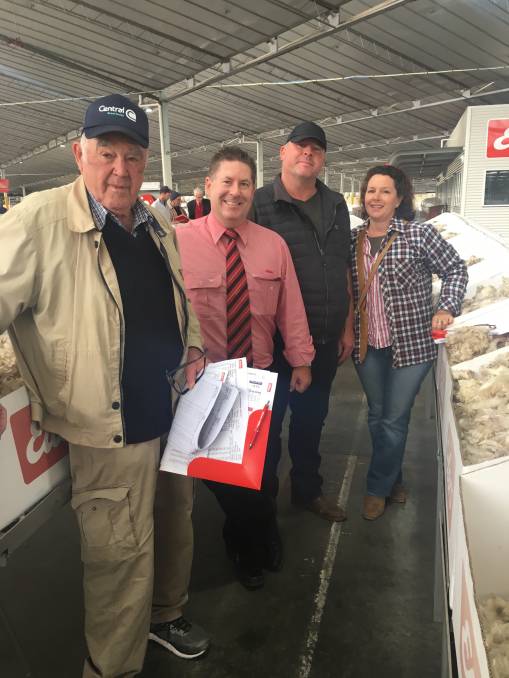 On the floor: Bruce, Jarrod and Emma Ross from Natte Yallock, with Adam Millard from DWM.

AS expected the market was lower last week after showing signs of wobbling at the end of the previous selling session in Fremantle.

Overall the market eased by around 40 cents a kilogram with some of the Merino fleece types falling by up to 80c as the discounts kicked in again.

When buyers are not as enthusiastic to soak up quantity, the amount of discount applied to a particular fault is exacerbated and so the simple numbers of lots with fault overpower the indicators for the market in a selection which we have at present with the ongoing dry conditions.

However, it was not terrible news during the week with the first day of selling seeing 20-30c come off fleece values.

Merino fleece generally lost 50c, except for the superfine sector which held up pretty well. Crossbred wools were 30-40c lower, while carding wools were 30c lower on average.

This week should see a much better tone around the country with encouraging signs emerging late last week to suggest that the upward trend will be re-established again - at least for a week anyway.

The ongoing volatility is getting on everyone's nerves from farm gate right along the pipeline.

Planning and budgeting become much harder when the price of the raw product is jumping around like it has been of late.

There seems to be a very strong correlation to the pattern last seen in 2011-12 when the market fell and subsequently recovered.

The chart of 19.5 micron wool in US dollar terms is almost identical to the corresponding period in 2011.

After a low point in August, a spluttering recovery saw prices generally lift through until the New Year or Chinese New Year.

After that point, which is also the peak processing period, prices did ease back again, but for now the market seems like it will follow a similar pattern.

For those who are too busy, or distracted with other facets of business, using the futures would be a wise strategy.

For both growers and processors this provides a base and removes some risk.

Demand from further upstream is ever so slowly increasing and the processing fraternity look a bit further forward than they have been until now.

The economic scene around the globe is not inspiring, but has possibly moved from terrible to so-so, allowing a few of the more optimistic to place firm orders for the 2020-21 season.

A surprise bounce in Chinese manufacturing and optimism over the US-China trade talks, as well as improving US employment numbers provided a fillip to world equity markets and confidence for consumers.

There is still lots of intrigue about what will be included in the first-stage trade deal between the US and China, where and when it will be signed.

Nobody is out there saying the wheels could still fall off at present, so the pent-up desire of both sides to get some sort of a deal done and de-escalate the tariff cycle should see something positive emerge in coming weeks.

According to some commentators the roll-back of tariffs would be a powerful thing for the global economy and a boost for confidence.

Moving from a situation of increasing tit-for-tat tariff increases not long ago, to one where tariffs are seen as a temporary feature on the global landscape is a major swing indeed.

All of the commentary of late, in a general sense, has swung over to a more positive vibe on this issue.