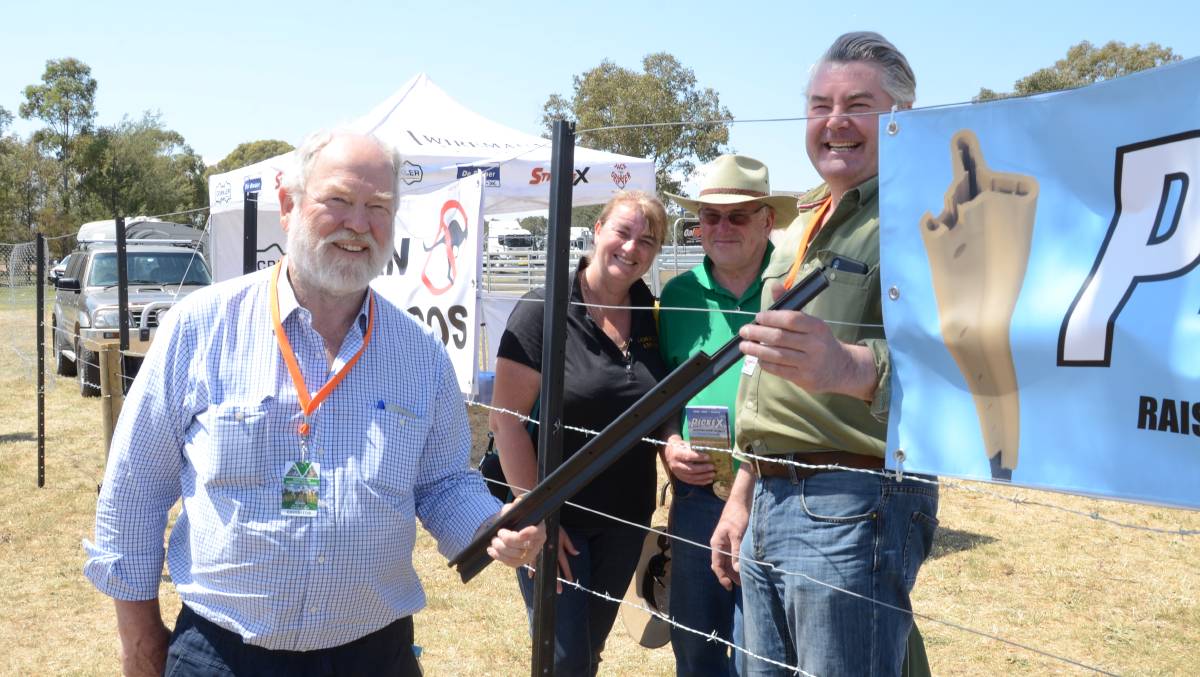 Fraser Old (left) and Ian Lowrey (right) show the PickeX plastic extension made of recycled PVC that will instantly raise the height of a picket fence to visitors Debbie and Graham Higham, Kamaroo Angus, Trunkey Creek.

Recycled PVC has a new use - raising the height of picket fences.

It's the PickeX plastic extension which elevates a normal star-picket fence to two metres, or head-high, says it's co-inventor, Fraser Old.

The latest product developed by Mr Old and business partner Ian Lowrey of Wireman Australia, North Sydney, at their experimental farm in the Megalong Valley, is one of several fencing implements designed by the duo and manufactured for them.

Wireman Australia was displaying its fencing gear at the recent Australian National Field Days at Borenore near Orange.

The PickeX, is made from recycled PVC and enables an existing waist-high fence to be extended to a head-high fence of about two metres in height.

"There's no need to undo any wires, and a couple of plain wires added above the fence completes the job," Mr Lowrey said.

"And, no need for an electric fence, this does the trick."

The extension is about 600 millimetres and slides easily onto a standard star picket.

"We are a unique Australian organisation that sells products developed by ourselves and are the subject of a patent or registered design protection," Mr Old said.

"We have a unique offering of our products which only we sell and most of it is made in Australia.

Mr Old said the extender came from the need of grape growers to protect their crops' leaves from deer invasion, and farmers from kangaroos.

The extender's origin came about some years ago when the two men were discussing some of the fencing problems farmers had.

Mr Old said one was a patent attorney (himself) and the other a client (Mr Lowrey) with fencing ideas.

"Ian was explaining the problems of fencing and I said that it couldn't be too hard to solve," Mr Lowrey said.

"Between us, we've come up with a range of products most useful for fencing.

"We have the DeBarber which removes barbs from barbed wire, and the Crinkler which re-strains existing fences."

Another is the StraineX which utilises two grippers the wiremen have called "Jack the Gripper" as it never lets go.

The "East Ender" is a net fencing strainer board and another invention that utilises a lot of Jack the Grippers.

"The typical problem with grippers is that wire will slip through," Mr Lowrey said.

"But these don't slip, nor do they drop off the wire, unless you want them too by squeezing the handles."

Wireman also has a digital tension gauge that is not important to everybody, but a fencer can show the client that the wire is tensioned to an exact strength.