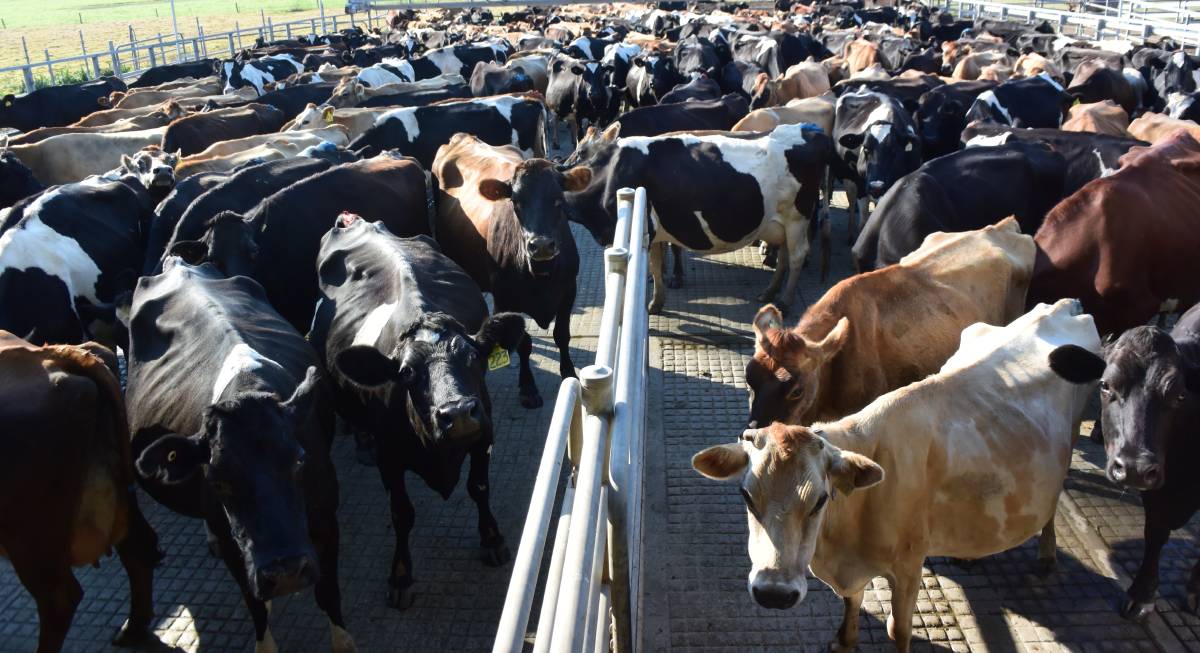 Friesian and Jersey cows wait to be milked outside the rotary dairy at Big River Milk near Grafton. The company's niche branded single-source product was cruelled by drought, saline water, a loss of volume and an unsympathetic consumer.

Drought and a broken industry has claimed another dairy producer, Big River Milk which processed and bottled its own brand of single-source coffee milk.

Another dairy producer has closed its gates, offering the enterprise for sale, citing drought, cost of feed and other issues like saline creek water for turning off the tap to production.

An unsympathetic consumer hasn't helped, with half continuing to pay $1.10 a litre - as much as niche brands spend in processing and transport.

"The cost of bottling and delivery was more than we could get when we competing against Norco and others," said Big River director Tim Bale. "The value of Big River Milk was in its single source product with no additives and the cafes loved it but they didn't want to pay too much.

"At the end of the day retail prices affect the whole industry. It's disappointing but in hindsight we should have pulled the pin 12 months ago."

As if drought, high grain prices, and threat of nearby bushfires weren't enough, an important water source for the farm - Alumy Creek - turned saline as river levels in the Clarence dropped and council opened flood gates to kill aquatic weeds and reduce acid sulfate run-off.

Tilba Real Dairy on the South Coast milks 230 Jersey cows and is surviving but charges more than $5 for two litres just to keep afloat. Bottling and transport costs alone equal the price of no-brand milk in the major supermarkets.

General manager Erica Dibden is calling on consumers to ask themselves how much do they value premium quality milk and do they want to maintain Australian owned industries into the future.

"How do we create a value for a product that is so manipulated and so squashed down?" she says.

At the consumer end there is no empathy. They always expect things to stay in the shop forever but there is no guarantee. - Greg Dennis, Scenic Rim real Dairy

"This issue has been going on for a long time. But this drought is scary and tragic and people are not taking the issue of food security seriously enough."

Ms Dibden pointed to other factors inherent in the dairy industry like the lack of strength as a producer group.

"We're not united. We can't agree on the cost of production."

Norco chairman Greg McNamara said the price issue wouldn't go away as long as half the consumers chose to buy at the $1.10/l price. And yet the loss of farmers remains "scarily real" with fresh milk production down from 8.3 to 8.1 billion litres last year and back from 12bl in 2002.

Part of the problem is a single price for fresh milk up and down the eastern seaboard. The cheaper production costs associated with Victoria are exacerbated this year with northern NSW and Queensland in drought while the south records its best season in two decades.

Independent milk producer Greg Dennis, Scenic Rim Real Dairy near Beaudesert, Qld says his enterprise remains in production and the brand enjoys a terrific on-line reputation but in the last three years sales have been compromised by enormous pressure from the major processors with the most local cafes reluctant to pay more.

His advice to anyone looking for a solution to their dairy crisis is to exit the industry.

"At the consumer end there is no empathy. They always expect things to stay in the shop forever but there is no guarantee," he says. "We are setting ourselves up for a massive failure because no one is listening to market signals."