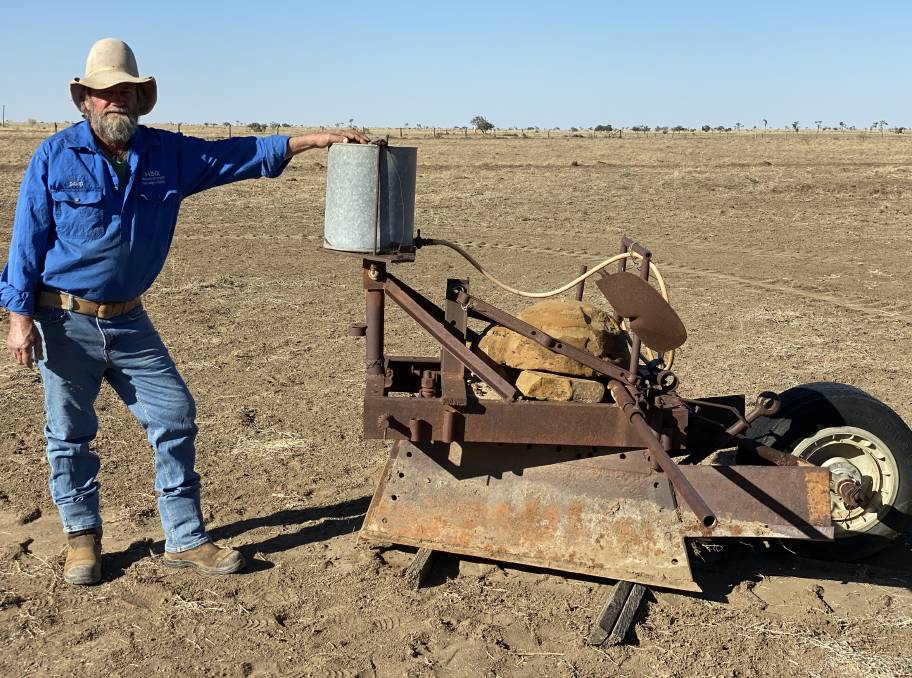 David Gray, Muttaburra, Queensland, with the original Brompton Rat designed and built by his father and grandfather in 1957. Photo: Jenni Gray

It was a simple machine, designed and built in a station workshop in western Queensland.

The Brompton Rat has now long been out of fashion, but was successful in its day in containing many grass fires on the open plains.

For many years, various inventions were developed, each with distinct degrees of success until Gordon Gray and his father Harry designed and built the Brompton Rat on the property Brompton near Muttaburra.

"One of the best fire fighting innovations I have seen and used is the Brompton Rat, which is an implement that attaches to the back of tractor and cuts a fire control line with ease at the same time as lighting the fuel as it passes. Essentially, a back burning operation in one pass," wrote Ian Atherton, district inspector RFSQ, Innisfail in the April 2015 issue of Smoke Signals.

Gordon Gray's son David still has the original 'Rat' on his property at Muttaburra and he said it is still used for many applications.

"Dad and my grandfather and one of our neighbours had been fighting a fire on a neighbouring property for a number of days and when they went home they said ... 'this is no good, we need to build something to make it easier to deal with the fires'," David Gray recalled.

"So they went to their workshops, my grandfather designed it and dad built it." 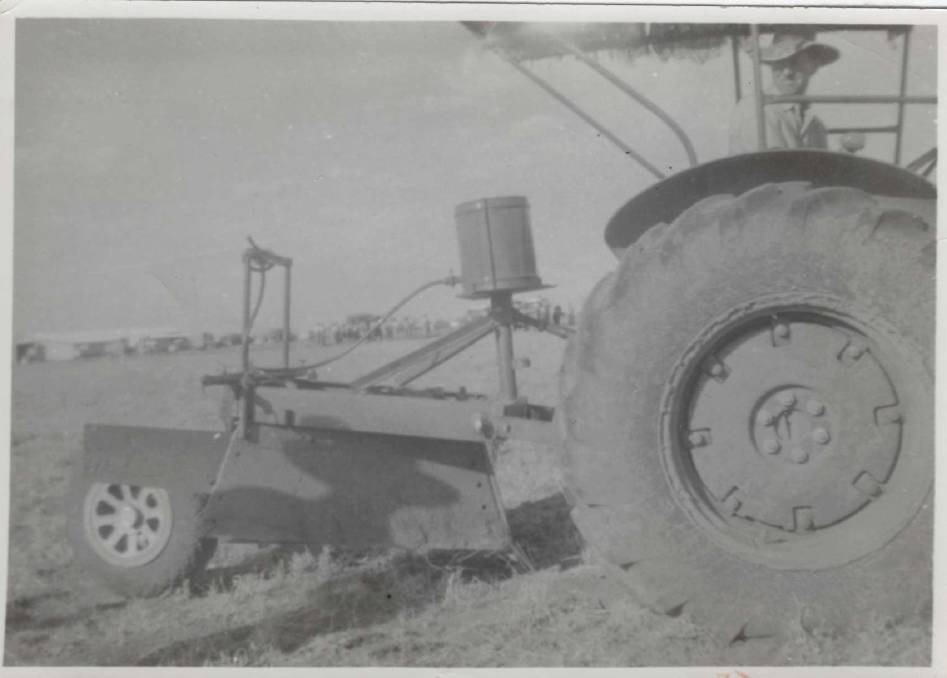 Named for the family property which they still own, the original Brompton Rat was built in 1957 and the patent was lodged in 1958.

Ultimately, an agreement was reached with Ken Doyle at the Hughenden Welding Works where he redesigned and manufactured the Brompton Rat, producing the first slightly modified implement in 1972.

It is a v-shaped machine with meter wide wings, similar, as one person said, to a bore drain delver, and drawn by the three-point linkage of a tractor.

"It was developed to swiftly cut a clean break in the continuity of grass fire fuel in the most advantageous position while simultaneously lighting a continuous backburn," David Gray said.

"The Rat was unique in that it creates a fire break and sets a backburn at the same time."

He made the point the Rat was designed for the control and domination of fires, not for stopping the lead, but as a means of steady elimination of the sides and tail of the fire without the use of water.

"No water at all is used with the Rat," David Gray said.

"It ploughs a track along the side of a fire and the burner on the side lights the grass near the side of the ploughed track as it goes and burns into the main fire."

It was originally designed to control fires on the Mitchell grass downs country of western Queensland, but quickly found favour among bush fire brigades in the pastoral regions of NSW.

The NSW Bush Fire Council tested the Brompton Rat as a bush fire prevention implement in western NSW in late 1975, and it proved a boon to fire break clearing and construction.

According to the autumn 1975 issue of Bush Fire Bulletin, the official journal of the Bush Fire Council of NSW, "at the completion of recent exhaustive tests and under varying conditions, Bush Fires Branch officer's in conjunction with Department of Agriculture engineering staff recommended certain modifications designed to improve the performance of the Rat and safety of operation in the field".

The modifications were carried out by Darryl Blinman of the Department of Agriculture Engineering Centre.

Lance Howley was the group fire captain for the Balranald Shire for 28 years and he remembers a Brompton Rat being purchased for $710 in 1977 on the recommendation of the late Dick Condon, Western Lands Commissioner.

"In 1974-75 we had the basic equipment and it seemed like a good idea to acquire a Brompton Rat," Mr Howley said.

One who did use the Brompton Rat to effectively control a fire was Michael Milthorpe at Hillston during the 1984-85 season.

"In the right conditions they were very effective," Mr Milthorpe said.

"It was an interesting and simple machine and used in conjunction with a fire unit was capable of doing a lot of back burning quickly."

Indeed, he recalled during one fire in 1985, the Brompton Rat drawn by a tractor and supported by three back-up fire units created a 16 kilometre backburn in quick time and effectively bringing the fire under control.

Jeff Foster from Bingara recalled seeing a Brompton Rat being demonstrated on the stock route south of Walgett in 1976.

"I wasn't that old at the time, but I did take a lot of notice and it seemed to work very well during the demonstration," he said.

Now living in Echuca after a career managing stations in the Riverina, Roly Desailly is another who remembers the Rat as being very effective on the plains country.

"The Brompton Rat was an improvement on the Comet Bell plough developed by C.B Bell when he was managing Westland Station near Longreach," he said.

"The Comet Bell plough was designed to cut a two meter break from which a back burn was made and I last saw one used in 1957 drawn by a team of horses."

Mr Desailly's description of the Brompton Rat and its effectiveness matches all others, and he said it was superseded when graders began to be purchased for general use on stations.

Now living in Townsville, John Kersh has spent a lifetime fighting fires on the open plains, and in his retirement he drew our attention to the Brompton Rat.

"I have had a lifetime of fighting fires in many parts of Australia, including the Great Sandy Desrt, Tanamai Desert and north-west Queensland," he said.

"But the most notable enlightenment was going to Bora, between Maxwelton and Julia Creek in north-west Queensland in 1979 and becoming acquainted with the Brompton Rat."

"When mounted on a suitable tractor one sets the depth to skim all the grass butts to each side and the movable drip torch is set to the selected side to light up the preferred grass swath.

"One positions oneself as astute to the active fire and the rogue fire in need of oxygen quickly draws the Rat's fire into the villain fire, which ends its advance!"

Mr Kersh pointed out many old and wise bushmen would insist one Rat was equivalent to at least six sizeable water trucks, yet requires only sufficient water to sustain the tractor driver.

"In practice it was desirable to have a light vehicle with a few hundred litres tank and pump to follow the tractor mounted Rat," he said.

"I have been amazed to have not sighted one Rat on all the TV footage we have seen of the fires in many regions of our eastern states."

Mr Kersh has offered to make a unit available and demonstrate its effectiveness during the current bushfire season, but is disappointed by the lack of response from the appropriate authorities.

"I have no doubt many farm establishments could have been saved and I have been affirmed in my belief by several other farm and station managers," he said.

The Brompton Rat had been recognised by the Rural Fire Division of Queensland Fire Services in 1992, when David Gray accepted the Certificate of Appreciation on behalf of Harry and Gordon Gray.

Ken Doyle traveled extensively throughout Australia promoting the virtues of the Brompton Rat and he also took the patent to England, France, USA and Canada.

His story was published in the Australian Overseas Trade Magazine in 1980, and further reference was made in the Agriculture Gazette of December 1978 in an article titled Bushfire prevention with the Brompton Rat written by S. Wedd.

To complete our story, the Brompton Rat was used by Queensland grazier Rob Levers to commemorate the antiquity of his land.

In 2017, a giant outline of an ammonite that swam in Queensland's inland sea more than 100 million years ago has been ploughed into the plains of remote Marathon Station near Hughenden.

Recorded in the Townsville Bulletin by John Anderson on August 17, 2017, who wrote the 800 milliemtre deep trench, which could be seen from space was dug by Mr Levers using the Brompton Rat firefighting plough designed by Hughenden inventor Ken Doyle.