UPDATED: The Australian barley industry is celebrating a huge win with India rubber stamping a move that will allow Aussie imports. 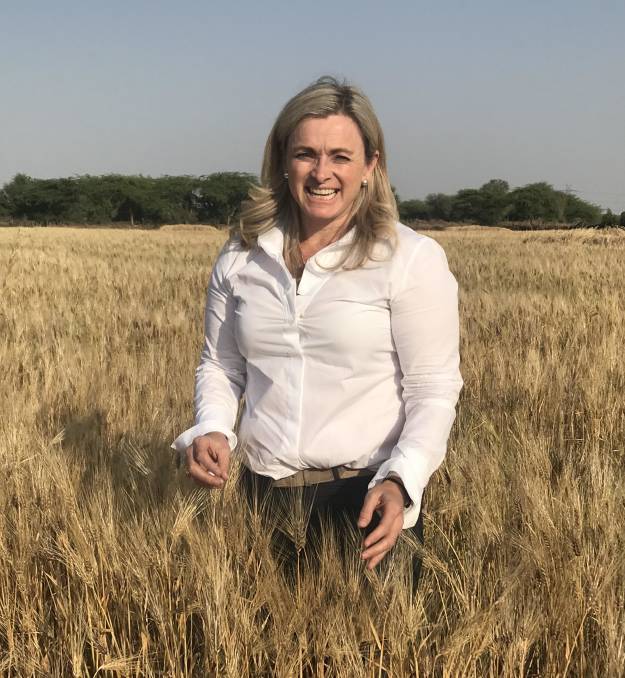 Australian Export Grain Innovation Centre barley technical markets manager Mary Raynes in a six-row barley crop in India. AEGIC has been working with the Indian malt sector to highlight how Australian barley could be used in the subcontinent.

AUSTRALIAN exporters could be sending malt barley to India as soon as April after the Indian government removed a critical phytosanitary requirement that acted as a roadblock to sales to the subcontinental nation.

It paves the way for a market industry insiders suggest could easily see Australian trade to Indian in excess of 500,000 tonnes in the near term, rising to up to a million tonnes with time to forge closer relationships.

Based on current malt barley prices, the cost of preparing the grain for export and sea freight sales of that volume would mean a windfall of in excess of $180 million for the Australian barley industry based on current Australian port prices of $280/t.

"We have been in talks with one business who has said they have negotiations in place to sell 60,000 tonnes of malt barley to India, contingent on the right protocols being in place," Mr Weidemann said.

The sales will be made possible due to alterations regarding Indian import protocols, in specific regarding the use of phosphine, Australia's major means of controlling pests in stored grain.

One of the side effects of methyl bromide is a massive reduction in grain seed viability, which makes it useless on malt barley, as maltsters require seed that is able to germinate.

The new changes will mean barley can be fumigated with phosphine with only a slight difference to Australian standards.

While the Indian beer market is nowhere near as developed as China, which was Australia's major international customer for malt barley until a Chinese government instigated review into alleged dumping of barley into China by Australian exporters, it is growing at a quick rate.

"It is fantastic to diversify into new markets, China is always going to be important to us but India presents some fantastic opportunities," Mr Weidemann said.

"There has been a lot of hard work going into this, from the guys at the Department of Agriculture to our agricultural counsellor in New Delhi Nora Galway who worked tirelessly to get it through," Mr Russell said.

"The team at the Australian Export Grain Innovation Centre (AEGIC) have also been fantastic in raising the profile of Aussie barley in India and helping us develop an understanding of the Indian malt sector.'

Mr Weidemann said the immediate market would be for malt barley but down the track demand for feed barley could develop.

"The Indian feed industry is probably still relatively small but with the scope of growth in all sectors there you would expect it to grow."

Mr Russell said there were still strict phytosanitary requirements that must be adhered to by exporters, in particular in regards to weed seeds.

"They will be very stringent on weed seeds and have concerns about wild radish and Italian ryegrass.

"It is something that can be managed through the supply chain, however it may initially mean that exports come out of regions that do not have big problems with these weeds."

Western Australia and South Australia are the major two export states for barley, however Western Australia, which has regions with heavy infestations of wild radish may have more trouble initially assuring a radish-free product.

India has previously purchased malt barley from countries such as Canada and Argentina in the past.

Canada does not have the issues with grain storage pests that Australia does as the grain is stored in cold conditions, meaning treatments are not required.