Study finds biserrula was the most successful pasture legume in dry times. Mike O'Hare, Beckom said their biserrula had recovered remarkably since the rain. The O'Hare's sowed biserrula 11 years ago.

For Mike and Velia O'Hare, Beckom, the pasture legume, biserrula, has defied nearly every dry season thrown their way since they sowed it 11 years ago.

But, the 2017 NSW Farmers of the Year said the drought was so severe last year that even biserrula was not able to set seed properly.

"We had three dry years in a row, so last year we had no sub-soil moisture at all to start with," Mike O'Hare said.

"That was the first time I've ever seen biserrula die."

However, the pasture, which the O'Hare's have sowed across half their 2000 hectare property, has made a remarkable recovery.

"It's come back unbelievably since the rain in the last couple of months," Mr O'Hare said.

"The beauty of it is, because of the high levels of hard seed, it will keep breaking down and coming back for years."

NSW Department of Primary Industries and the Graham Centre for Agricultural Innovation researchers, Dr Belinda Hackney and Dr Jeff McCormick found biserrula was the most successful pasture legume to establish and produce seed under severe drought conditions in NSW's 450mm rainfall region in 2018 and 2019.

Dr Hackney, from the DPI soils unit at Wagga Wagga, said unlike other pasture legumes which had set growing periods, biserrula had the capacity to continue to grow and set seed whenever moisture was available.

"In 2018, biserrula under extreme drought stress seemed to have the ability to bring forward the commencement of reproduction growth," Dr Hackney said.

"About 40 per cent of its total seed production in 2018 happened before French serradella even started to flower, so it has this incredible plasticity in initiating reproductive growth."

She said biserrula produced sufficient seed in both the 2018 and 2019 trials to form a viable seedbank for future regeneration.

Mr O'Hare said they grew biserrula for both livestock and cropping benefits, the pasture fixing nitrogen and acting as a weed and disease break in between cropping phases.

"The idea is to get organic nitrogen from the pastures and keep our sheep fed in the meantime," Mr O'Hare said.

He said they cropped 50 per cent of the property on a four-year rotation.

The first year they allowed biserrula to maximise its seed set, the second year they sprayed everything out in the spring for a fallow before planting canola in the third year, followed by a wheat crop in the fourth year.

"Growing canola on fallow, we've found it's roughly 0.5 tonnes per hectare better than growing it after a cereal crop," Mr O'Hare said.

However, he said since they hadn't had sowing rain for the last two years they had to adjust their rotation and last spring had decided to forgo a fallow.

"I thought our best chance of getting any moisture to grow canola would be on our wheat stubble, it's a little more risky but we're just trying to adapt as best we can." 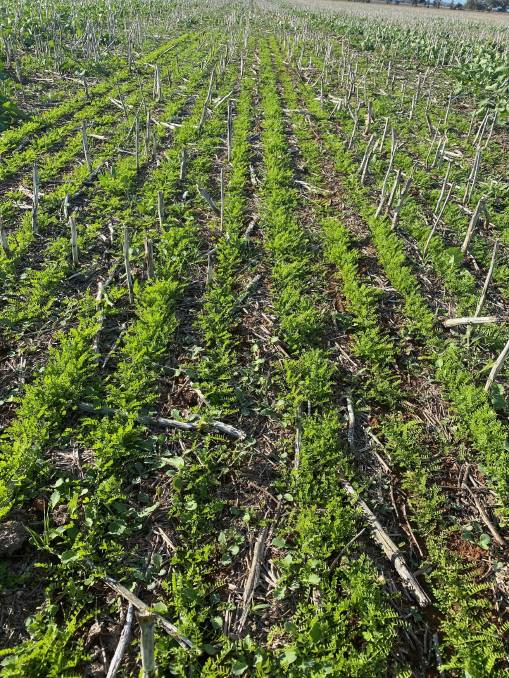 Summer sowing opens the sowing window for legume pastures. Pictured is biserrula established via summer sowing in late February 2020, this photo was taken on April 6. Supplied.

The characteristics of second-generation pasture legumes allow them to be sown successfully during summer, a project supported by the Grains Research and Development Corporation, Meat & Livestock Australia and Australian Wool Innovation has found.

This characteristic, along with their deep root systems and hard-seed levels, made sowing in summer possible.

"Traditionally, pastures don't go in until after the cropping program has finished," Dr Hackney said.

"Therefore, they're going in very late, which means they are trying to establish under cold conditions and there can be limited growth in the pasture's first year.

"However, with second-generation legumes you can make use of hot summer conditions to break down the hard seed. The seed's then sitting there ready to germinate on opening autumn rain, so it gets up and away earlier in the season."

Dr Hackney said due to second-generation legumes' large seed levels, you could also crop over them for a number of years without having to re-sow.

"Eventually you can use them as an on-demand break in the cropping rotation," Dr Hackney said.

"Grow the legume in the first year and manage it to maximise seed production, it will fix 25 kg nitrogen per tonne of dry matter it produces.

"Then sow a crop over it to use the nitrogen and then you can decide whether to crop again or let it regenerate as part of an ongoing program."