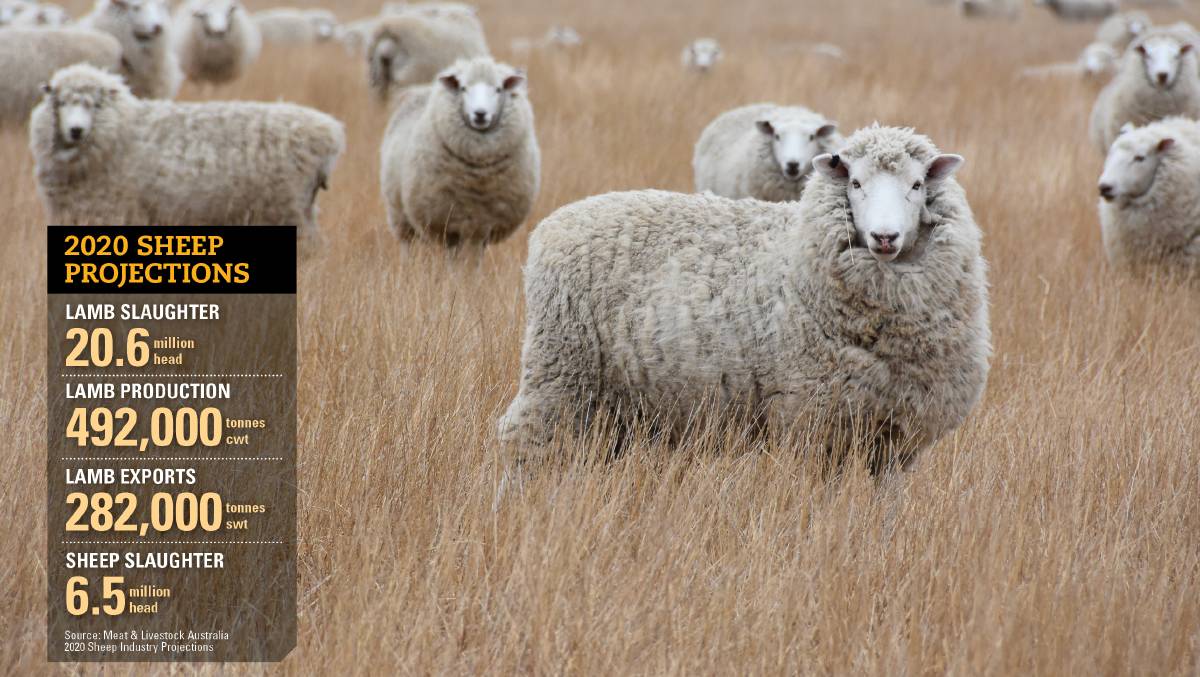 MLA is anticipating lamb slaughter will decline to 20.6 million head.

A recovery in the national flock is underway, with sheep producers in key regions now in a position to consider increasing flock numbers, buoyed by improved seasonal conditions, according to Meat & Livestock Australia's 2020 Sheep Industry Projections June update.

Despite the positive outlook for above-average rainfall between June and September for most of the country, the impact and severity of consecutive drought years will impact overall sheep and lamb supply in 2020, especially during winter.

MLA senior market analyst Adam Cheetham said as producers looked to rebuild flocks and ewe lambs were retained, lamb slaughter was anticipated to decline to 20.6 million head, back 5 per cent on 2019 levels.

"Similar to 2018 and 2019, supply is expected to be particularly tight during the winter months, given the depleted breeding ewe flock and fewer lambs on the ground," Mr Cheetham said.

"Lamb carcase weights are forecast to increase 0.6 kilograms a head on 2019 levels to 23.9kg/head, assisted by improved feed availability, a greater number of lambs in lotfeeding programs and strong price incentives to finish lambs to heavier weights."

However, he said increasing weights would not be sufficient to offset the fall in slaughter.

"Following back-to-back years of excessive turnoff, sheep slaughter is forecast to decline by 30pc to 6.5 million head in 2020.

"Underpinned by the substantial decline in sheep slaughter, mutton production is forecast to fall sharply to 161,000 tonnes cwt, back 29pc year-on-year."

Export forecasts for the year have been revised lower, due to the softening global economy and tightening domestic supply.

"Global market conditions have been particularly volatile in the past few months, as the spread of COVID-19 has fostered instability, created logistical hurdles for trade and slowed foodservice industries around the world.

"A global recession looms, and with over two-thirds of Australian exports destined for heavily impacted foodservice channels; how this sector recovers as markets ease COVID-19 restrictions will be critical for Australian sheepmeat demand prospects.

"However, sheepmeat remains a niche, premium component of many diets, and so the impact of COVID-19 on Australian sheepmeat demand may be more sheltered than many sectors, given that lamb and mutton play a central role in a broad mix of cultures and cuisines.

Mr Cheetham said sheep and lamb prices were expected to remain at historically high levels for the remainder of the year.

"The expectation for fewer lambs available for slaughter, strong restocker demand for ewe lambs, limited competition from New Zealand, and a low Australian dollar, are all factors contributing to strong price prospects," he said.