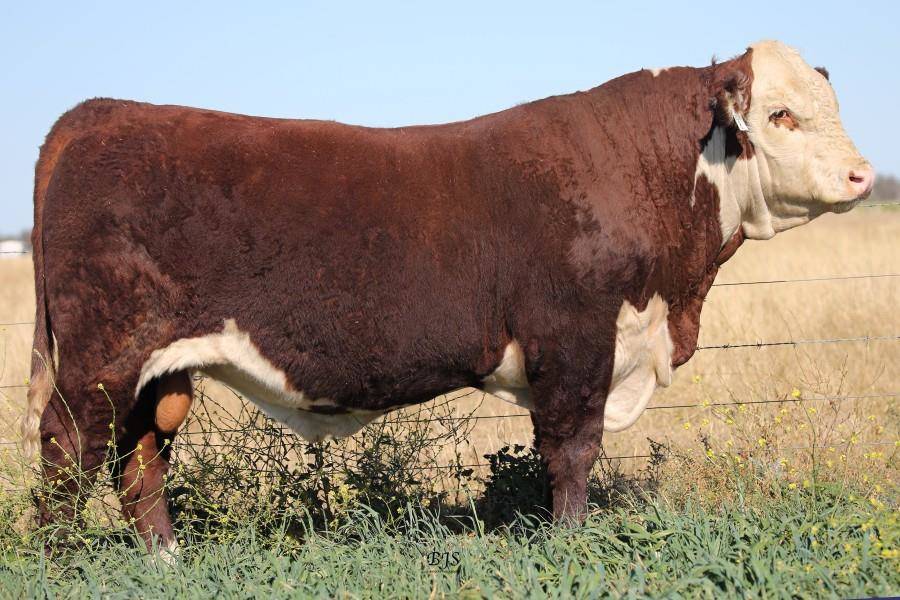 Rayleigh Pegasus P47 reached the $12,000 top price and was secured by A, V and W Fisher. Photo: Rayleigh Poll Herefords

North west producers armed with renewed optimism from the season at hand were among the buying gallery at the Rayleigh Poll Hereford bull sale where bulls boasting breed leading marbling figures were highly sought after.

Youth members looking for foundation bloodlines and repeat clients chasing new genetics supported the annual sale of the Holcombe family near Burren Junction on Friday with prices soaring to $12,000.

Large framed two-year-old sire Rayleigh Pegasus P47 attracted plenty of attention for his raw IMF scan of 7.1 per cent in March and as a result successful purchasers the Fisher family, Coorawong, Coonamble, were pushed to pay top dollar of $12,000.

The Fishers run a sheep, cattle and cropping enterprise and have about 150 Hereford cows running alongside trade cattle with feeders their target market. With the property looking the best it had in decades, the Fishers are focused on rebuilding and had chased the top bull for his Bowen Calivre K207 bloodline and IMF.

"I always use the analogy if you pay an average price for something you will get average but if you put a bit of money into them it will pay off," Mr Fisher said.

The sold lots were bound for new homes from as far as central Queensland to northern Victoria.

While the Coonamble and Narrabri regions continued to be the biggest supporters, this year's sale was boosted by the return of Walgett-based buyers too.

W Buchanan, Narrabri, made their presence known in the heifer draft purchasing five females, all daughters of Yalgoo Knickerbocker L205, to average $3400.

The top price females were Rayleigh L Lilly Q028, a deep and thick female that Rayleigh struggled to give up, who sold to Eclipse Poll Herefords, Quirindi, and Rayleigh L Lacey Q036, a Knickerbocker daughter out of a top cow who sold to W Buchanan, Narrabri.

At least five of the heifers were secured by youth members for foundation herds.

"We were very humbled to see people choosing our females to go and make up the basis of their herd," Rayleigh's Anna Holcombe said.

"There was definitely interest due to our pedigrees and our EBVs that attracted people to come and have a look. There was also a bit of interest in the sons in our sire Yalgoo Knickerbocker who is a bit of an out cross pedigree and people looking for something a bit different."

The Holcombe family were over the moon with the results and thanked repeat clients who had continued to support them through several tough years in the district.

"We are looking forward to what is shaping up to be good times ahead of the Australian beef industry and a thank you as well to all of our new clients that have joined our program this year and showed confidence in what we are doing," Anna Holcombe said.

The sale was conducted by Nutrien Ag Solutions.

Read the full report in The Land this week.