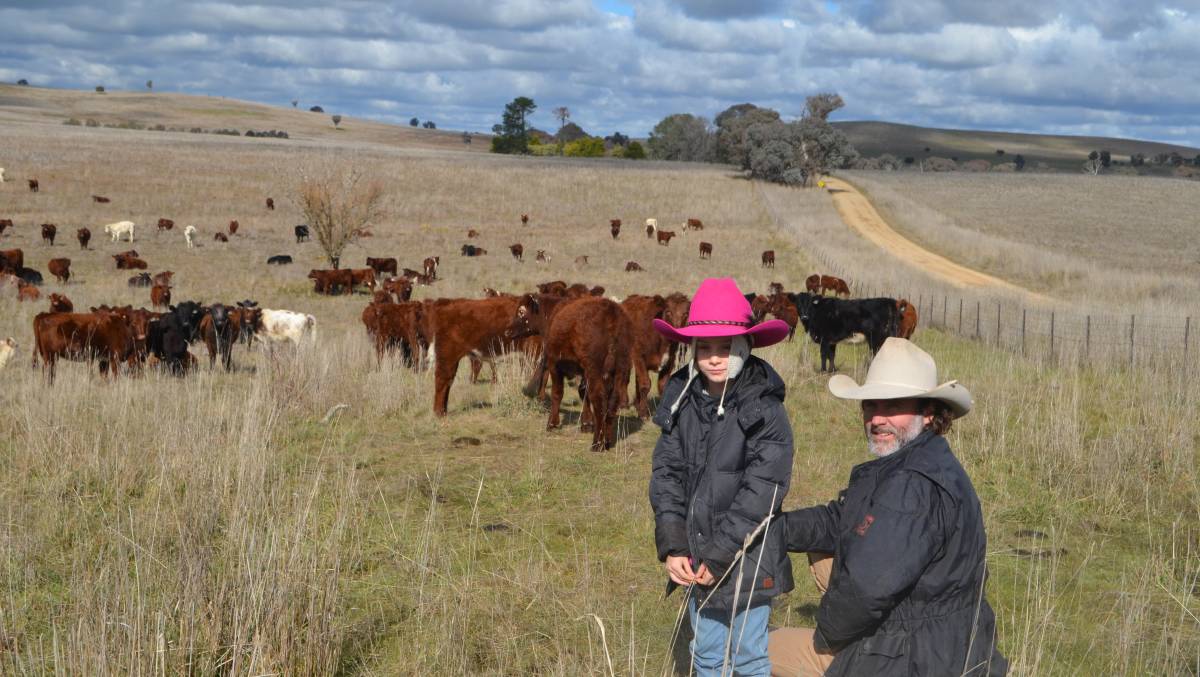 Charlie Arnott, Boorowa with his daughter Lilla checking pasture growth and condition of his heifers. 'Changing the paddock between your ears" is a really exciting prospect and could lead to a better agricultural system.

Working with nature and not 'fighting' against her was the message coming out of Agriwebb's 'The Future of Farming series: Regenerative Agriculture' webinar.

Working with nature and not 'fighting' against her was the message coming out of Agriwebb's 'The Future of Farming series: Regenerative Agriculture' webinar.

It is not a prescriptive program but one where farmers can pick whichever direction they wish to take and it all comes back to looking after and improving the health of your soil.

Mr Trethewey admitted changing his mindset was the biggest hurdle he overcame in adopting regenerative practices on his Tasmanian based operation.

"I began to look at my farm as a business partner within the biological ecosystem,"he said.

"And then I started considering the weeds on my place, what and why they were there."

Mr Trethewey said once he started to 'read' his weeds and understand what specific weeds grew where and why, he purchased a book called Why Weeds Talk.

"All of a sudden those other 'light bulb' moments were unlocked," he said.

"I began to have an understanding about the importance of soil health, its bacteria and the need for deep tap roots."

Mr Trethewey noted weeds are nature's way of telling you something is not right with the soil.

"So get out of her way, stop killing and start getting behind nature to improve your soil," he said.

Ms Gordon agreed when she said the concept of regenerative agriculture is about being resilient so future generations can farm with confidence.

"It is not about making a lot of money one year and little the next," she said.

"It is about being resilient in the landscape, in our communities and taking our farms into the future.

Being financially resilient will encourage the long term occupation of family farms with opportunities to produce healthier food.

When advising people about regenerative agriculture, Ms Gordon said take the first step and implement a couple of practices which you think will fit your operation.

"Don't go the full detox, just pick one or two practices and give it a go," she said.

Mr Arnott thought 'changing the paddock between your ears" is a really exciting prospect and could lead to a better agricultural system.

"Success is the confluence of preparation and opportunity" was a concept he had heard recently and wished to pass on.

"I think there is a massive opportunity for farmers to adopt regenerative farming in terms of the food you produce, benefits to their on-farm economy, their well-being and to the environment of the farm and the general community," he said.

"We are heading in a positive direction and not going backwards with movement from producers to consumers."

Summoning up Mr Mahar thought the two concepts 'the paddock between your ears' and 'read the weeds and stop killing stuff' were those he would take out of the discussion.

"I think there is a huge opportunity to pick up our understanding of regenerative agriculture," he said.

"Recognising that there are already a lot of people in the farming business who are already doing a whole lot of the existing activities.

Mr Mahar said there are not one or ten particular practices you've got to tick: there are practices, procedures and systems in place that probably align with the theory of regenerative agriculture.

"Let's bring everyone along for that discussion and let us try not to have division around what is or what isn't regenerative agriculture," he said.

"My wish is we keep having the discussion so we can all build a sustainable industry and get to that $100 billion target by 2030."