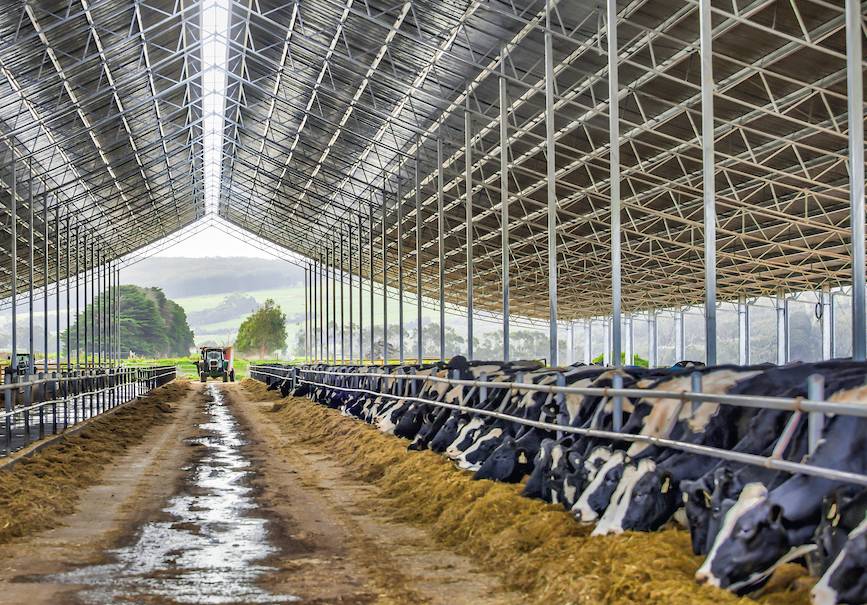 Contented cows: After just a few weeks of this Victorian dairy's cows living in the Ridgeback™ cow barn production improvements are already on track to reach the farm's goals. Picture: Supplied

This Victorian dairy farm is targeting 40 per cent production gains with an infrastructure investment in a cow barn.

This article is sponsored by Entegra Signature Structures.

From the top of the hills you can see the vast expanse of sea on the far side of the famous Great Ocean Road.

This part of the world is beautiful, yet raw. It isn't windy today, but the slight breeze coming from the west is chilly.

It had been pouring rain during the past four days, according to the dairy farm manager, who was grateful for the sun peeking through the clouds.

But apart from muddy puddles littering the laneway alongside the dairy yard - there is no evidence of cold, wet and harsh conditions.

The cows, up to 700 of them, are spread across two sides of an impressive 13,000 square metre barn which sits neatly atop a hill at the bottom of the concrete dairy yard.

Some are eating, their heads poking through into the central feeding lane devouring the silage and corn ration. Others are loafing on the soft floor - a combination of sawdust and oxygenated compost - the latter keeps bacteria at bay.

A few milkers are sniffing each other, some rub up against the steel rails - unlike their sedentary herd mates these bovines are spending their afternoon socialising.

There's no sign of the cold and wet conditions affecting this herd.

"They've just started in the shed," the manager said. "Basically, within the first week in the shed the cows (production) went up three to four litres.

"Then obviously there's the benefit for the people. It's very comfortable for them to come and do the milking. They are not saying, 'Tomorrow it's going to rain and we need to get the quad bike and the bad weather means the cows don't want to walk because it is too wet or there's wind coming in the opposite direction'. Staff just get the cows from the shed and then they go back to the dairy."

A staff member walks into one side of the barn and begins to herd the cows toward the entrance facing the dairy. It takes only minutes before the herd walks towards the rotary platform and is shut into the yard.

"Getting the cows" from the paddocks in these wet and soggy conditions used to take up to 1.5 hours and required a quad bike. 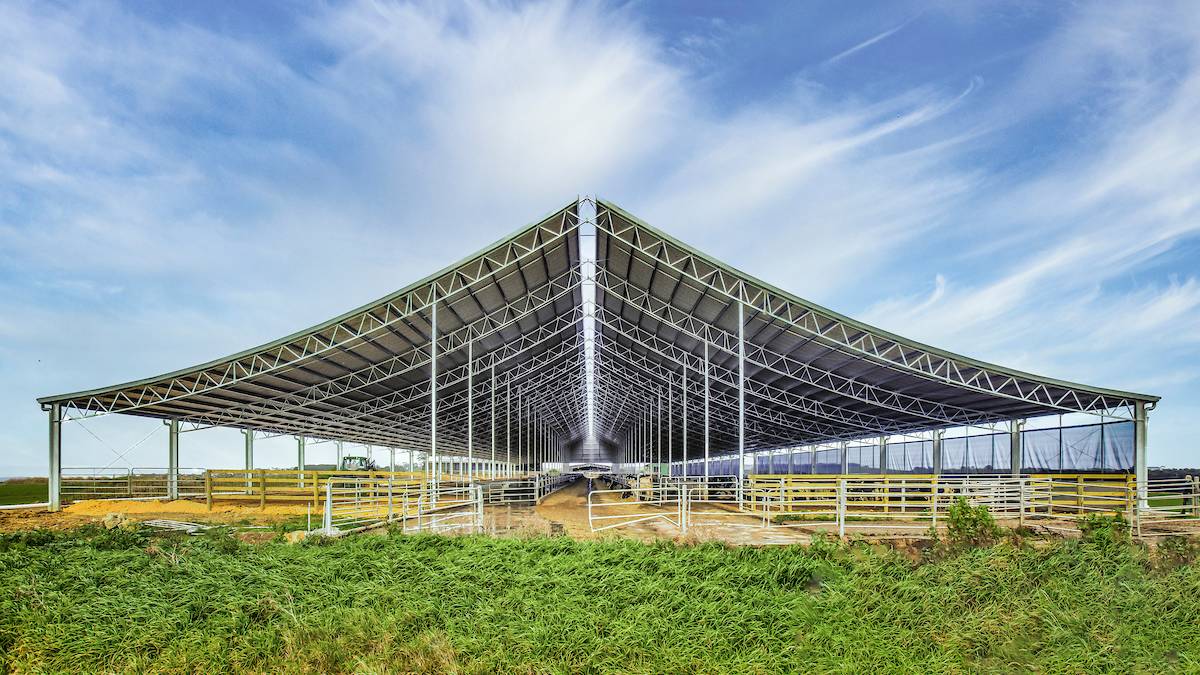 These cows have only been living in the Entegra built and designed Ridgeback™ cow barn for a few weeks, and the production improvements are already on track to reach the farm's goals.

The business is targeting production of 12,000-14,000 litres a cow per lactation, milking three-times a day. This is an increase of up to 40 per cent from the current average herd production and 127 per cent more than the average Australian cows' milk production.

The land surrounding the dairy and barn, previously grazed by the herd, is now used to grow ryegrass pastures and crops which are fed back to the milking cows.

Gains in milk production will provide the return on the investment for the barn. Improvements in cow wellbeing - and a resulting decline in animal health expenses - as well as better yielding pastures and crops, due to less compaction and destruction from cows, are added bonuses.

Taking feed to the cows in large barns - referred to often as a housed cow or total mixed ration farming systems - rather than letting them graze, has been a popular farming practice in the EU and US.

Australian farmers, though, have generally opted to graze cows year-round. Last year, farms operating with a total mixed ration system accounted for 3 per cent of the entire industry, according to Dairy Australia's National Dairy Farmer Survey.

This was up from 1 per cent in 2017 and the rise attributed to farmers adapting to changes in climate, a desire to increase production, and improve animal welfare.

At this south west Victorian dairy farm, cow comfort has always been a priority and its production figures demonstrate the payback on this decision. Housing the cows has further intensified this focus.

He instigated the purchase of the Ridgeback™ barn - drawn to the innovative self-ventilating structure and how it optimises airflow.

For Professor Lean, housing dairy cows is a way the Australian industry can overcome some profitability constraints.

"There are several factors which change the economics, number one is that they are no longer losing energy in exercise," he said.

"Two, it allows the cows to handle the adverse environment far better and the farm is able to grow crops that yield much more per hectare. Finally, when you are talking about pastures, you are no longer destroying 20 per cent of the pasture through cows walking, defecating, and urinating on it. In wet climates, the impact of pugging is vastly reduced.

"We have done a number of sheds now [with clients] and they have all had similar responses. The thing that makes me, and them, happiest is that they have happy cows, cows that are content."

We will no longer be losing 30-40 per cent of our pasture density with cows walking on it - pugging up the ground- on wet days. It makes it very easy and simple.

Improved ventilation is at the heart of the Ridgeback™ design. The barns' concave curved roof not only looks good, but it helps heat escape faster than a traditional straight-line shed.

Studies commissioned by Entegra show at least 20 per cent more air changes per hour inside a Ridgeback™ barn - compared to traditional style sheds - because of its design.

Ridgeback™ barns have housed beef cattle in the Northern Territory and dairy cattle in hotter, drier parts of the country.

The Ridgeback™ on this south west Victorian dairy farm is 6.75 metres high at its lowest point along the outside perimeter and steadily rises to 15 metres in the middle. A gap of 1.6 metres runs the length of the roof at its highest point, this is where the heat and livestock emissions escape.

This Ridgeback™ has been customised for the local conditions with a shade cloth along the west wall, covering a 5 metre opening along the side. This provides additional wind protection and can be moved if required.

Getting the most from the barn

Charles McCalman is an Entegra Design Consultant and worked with Professor Lean to tailor the Ridgeback™ to suit the site and farm requirements.

"They were interested in our patented roof design, obviously looking to improve the farm through technology and were really interested in the improved ventilation through the Ridgeback™," he said.

"From the farm owners' perspective too, it was very visually appealing as well and that was a major part of the reason, he went with it."

A 3D presentation, including an artist's impression of the structure, provided an insight into the shed and how it would fit with existing infrastructure and the landscape.

Building the shed over the established concrete feed pad, was the key to maximising functionality.

Entegra Project Manager Michael Winn said vital construction elements, such as internal clearance heights and the positioning of central posts, were built around the feed and flush area.

"We had to be wary of the clearance under the trusses inside, so it was possible to take tractors down either side for cleaning or spreading out feed," he said. "We didn't want to restrict the functionality of the barn."

"The other things like hot dipped galvanised structural steel is important on cow shelters because livestock emissions can corrode the steel and cause rust issues," Michael said. "The roof purlins are galvanised, and that just gives them an extra protective coating. If you just had raw material and painted it, that paint would not last long, and the steel would be more susceptible to corrosion."

Back in the barn, the farm manager is excited about this investment in cow comfort and what it could deliver for the future.

One change includes moving to year-round calving, enabling it to deliver a flat and consistent milk - the type of supply in demand in Australia. Individual cow management will also become simpler.

Monitoring animals, including what they eat and how they are acting will be easier, while recording tangible measurements - such as body condition - will help management.

But the benefits are not limited to production. In a region known for its wet and soggy winters and surprising hot summer days, climate will no longer be a limiting factor for this farm.

"We will try and make the most of the weather we have got here and grow more fodder through the summer," the manager said.

"We will no longer be losing 30-40 per cent of our pasture density with cows walking on it - pugging up the ground- on wet days. It will be good; it makes it very easy and simple."

This article is sponsored by Entegra Signature Structures.