The Mayne family of Texas Angus cleared all 155 bulls at auction.

It was an emotional day for the Mayne family of Texas Angus after buyers made the ultimate Powerplay and paid to $108,000 at their on-property sale.

The stud had previously sold bulls as high as $56,000 and were blown away with the support from repeat and new buyers in Queensland, NSW, Victoria and Western Australia.

But Ben and Wendy Mayne admitted they were nervous about attracting a crowd given the COVID-19 restrictions.

"One thing I was pretty confident about was the quality was all the way through," Mr Mayne said.

"I knew it was going to be consistent it was just whether we could get enough people here with the COVID restrictions.

"We would have had 50 different people that were coming that rang up in the last 48 hours and said they can't come because they were nervous crossing the border." 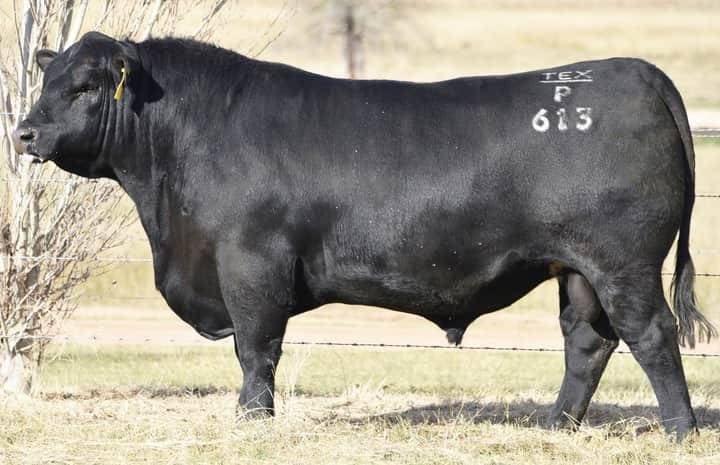 Achieving a price far beyond their wildest dreams was one thing but the sale was just as special being the first since the passing of stud stalwart William 'Bill' Mayne.

His son, Ben, shed a tear when remembering his late father at the start of the sale and wished he had seen the line up of bulls.

"One of the last conversations I had with him was about cattle," he told the crowd. 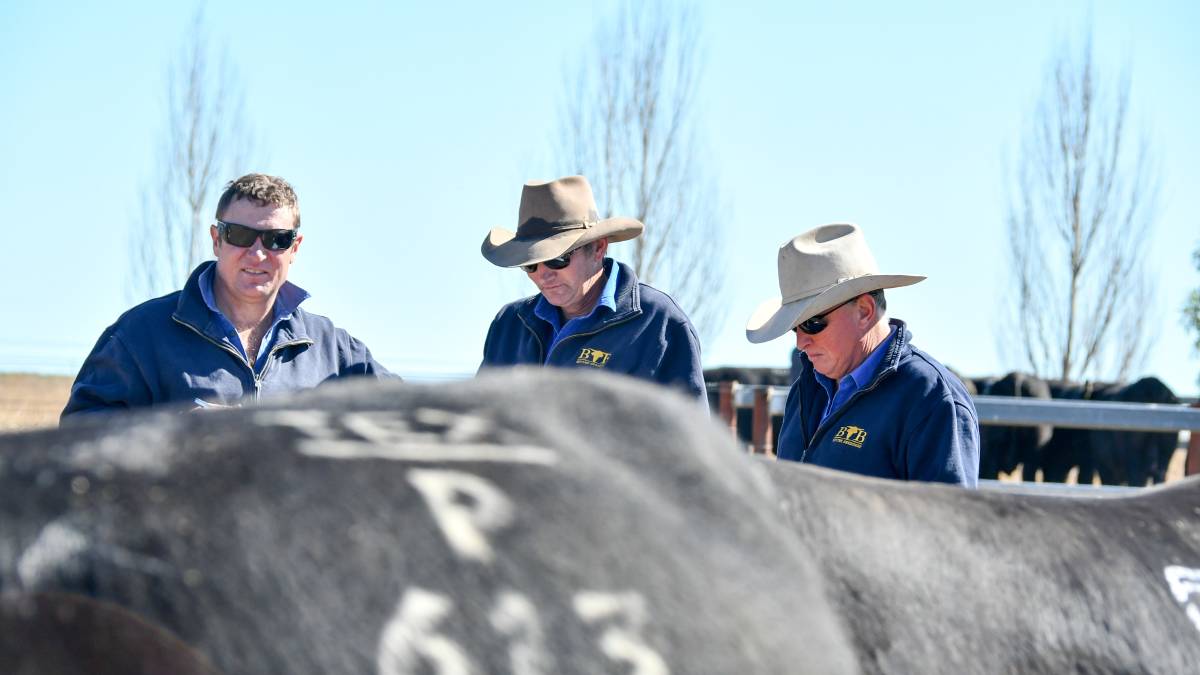 "That was amazing. I think Dad has got a bit to do with this. After what we have been through with drought that's one hell of a reward."

Among the lineup was a bull described by many as the best to ever be bred by Texas and he didn't disappoint when Kelly Angus, Yea, Victoria, paid $108,000 for the two-year-old son of Ayrvale Hercules H9PV.

The embryo combination with the Texas Undine H647 cow was one the stud said would be hard to beat and would feature at Texas for years to come. 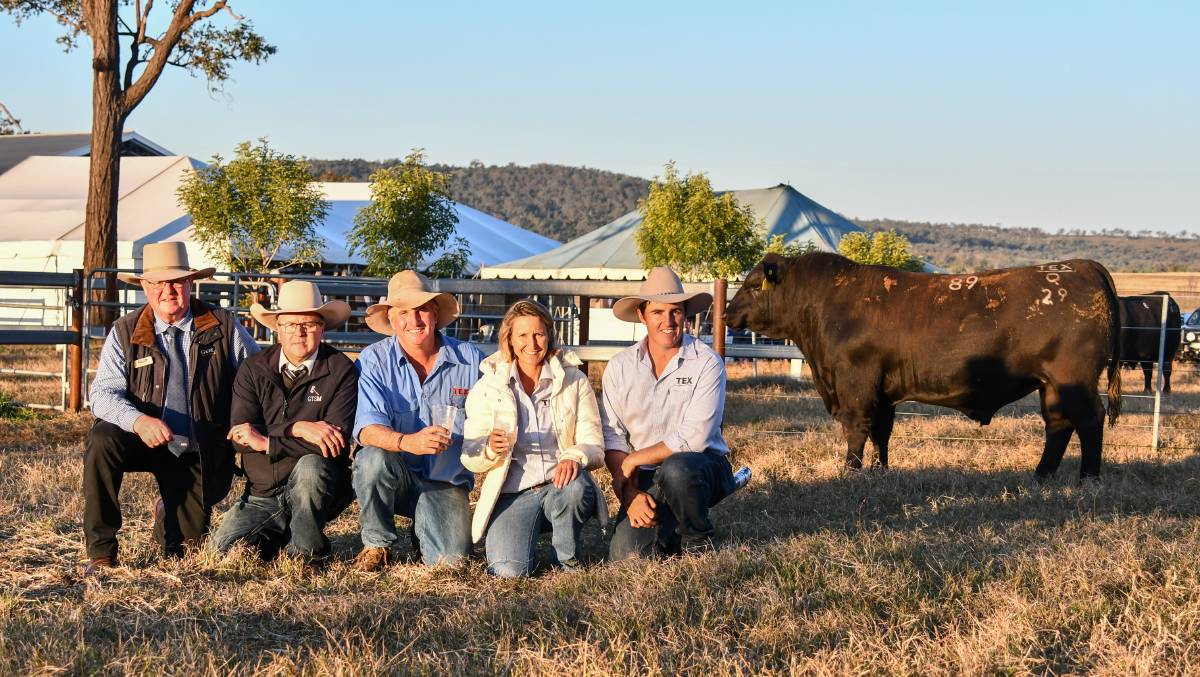 The 1070 kilogram bull was sold as full possession and a half share of semen and marketing rights.

With estimated breeding values in the top one per cent for carcase weight and grass index and the majority of his figures no lower than top 20 per cent, he was described as a top stud sire.

Both Ben and Wendy Mayne agreed he was the type of bull they wanted to buy and had the phenotype, numbers, structure and profitability to perform.

A full brother has also been retained in herd and the Maynes will use both in the artificial breeding programs.

Kelly Angus manager Patrick Joyce was full of thanks for the Mayne family for breeding Powerplay who he believed was one of the best Angus sires to come out of Australia.

Having utilised the genetics of his father and grandfather successfully in their herd before, Mr Joyce had no doubt there was value in paying so much for the young bull.

"I'm very familiar with his pedigree and once Texas had blended him with their style and side they have built a combination that is probably pretty flawless," he said.

"He has got impeccable feet and for a 1000 plus kilogram bull, he certainly is free moving.

"He has got a really set of solid data and EBVs. It is consistent but its all where you need it to be. No matter what herd he would go into he would be a herd improver."

Kelly Angus is built around deep, strong and resilient cattle with maximum performance and optimal returns.

The stud runs about 600 registered cows, all artificial insemination bred, with calving in spring and autumn. The bull was on-farm in Victoria on Sunday with plans for semen collection to be marketed by Select Sires.

"At the end of the day the Texas program from Ben and Wendy is rock solid," Mr Joyce said.

"I think he is exactly what we are striving to achieve. We are achieving it but we want to keep getting better and better all the time."

The 19-month-old son of GAR Ashland was said to be phenotypically more attractive than his EBVs which were top five and 10 per cent for 400-day weight, carcase weight and all indexes.

The bull was bound for the herd of Mostyn, Tony and Karen Golding who selected the sire for his growth data, low birthweight and new genetics for their heifer herd.

They will mate about 330 seedstock females this year and Tony Golding said he preferred to buy sons of American bulls rather than use them directly.

"We tend to find a son of the American bulls that is out of a very good strong Australian cow family that will hold up their structure, feet and temperament," he said.

"We find it extremely difficult to be able to buy bulls to bring back into WA because of the Johnes status of most herds and what our status is.

"Normally we like a bull and so does everybody else. If we want them we have got to go hard."

They didn't shy from bidding high for the top price bull given the semen interest he would attract but they have already received enquiry for their second top price purchase.

Profitability and carcase performance are key selling points of the Texas Angus genetics given their consistent success in competitions across the country and the market demand for that breeding direction was clear to see on the day.

A total of 105 bidders registered on the day with just under 500 viewing online through Elite Livestock Auctions. The family spent up to $25,000 upgrading telecommunications on the property to accomodate the online system for the first time and it paid off with 25 bulls going the way of the modern platform.

GDL representative Harvey Weyman Jones said it was pleasing to see the demand from NSW buyers this year given the change in season and strong cattle prices.

"It's so pleasing to see the confidence of buyers coming back and bidding up so strongly," he said.

The 2021 auction could be just as hot after Mr Mayne announced the stud had obtained exclusive semen rights in popular American sire Poss Maverick and would offer five to 10 bulls by him next year with more to come after that.

Not only was the bull attractive phenotypically but he had carcase data to back it, Mr Mayne announced.

The sale was conducted by GDL and Bob Jamieson Agencies with Michael Glasser of GTSM and Mark Duthie and Peter Brazier from GDL taking on the auctioneering job.

Read the full report in next week's paper.