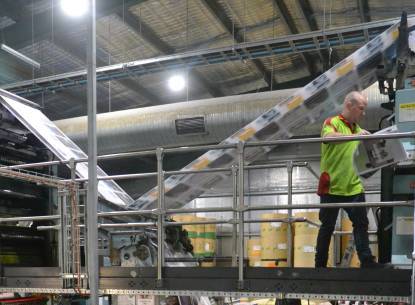 As news audiences have increasingly moved online, the number of printed publications and the volume of printing has reduced.

Antony Catalano outlines ACM's rethink of its printing operations and why change is needed to help protect the companys trusted newspapers and journalism.

When I joined The Age in Melbourne in 1990, the printing presses in Spencer Street would usually start running about 10.30 or 11 o'clock at night to produce the first edition of the newspaper and they'd continue through until about 3 o'clock in the morning for the third edition.

During the day on most days, we journalists would park our cars in the loading dock because the presses weren't running.

It was the same when I started at the Sun News-Pictorial in 1985 - the loading dock in Flinders Street was empty all day so the journalists and photographers always parked there.

In those days the Sun News-Pictorial, the afternoon Herald and The Age were - in terms of media - the only show in town so they could afford to let their presses lay idle.

And that was OK for those glory days back when newspapers were the main way people got their news and information; back when mainstream media was very lucrative and virtually a licence to print money.

As a consequence, every publisher had their own printing press - because they could afford to.

But that's not the commercial reality we face today in Australian publishing.

This has left our printing presses with more capacity than there is demand - and that was before the economic challenges brought by the coronavirus pandemic.

So the ACM business, the publisher of this website, has been looking at the most effective and efficient ways to produce our newspapers in the future.

Now, following a period of consultation with affected staff, we have decided to proceed with the closure of our Canberra, Ballarat and Murray Bridge printing facilities, with the final decision regarding Wodonga still being considered. As part of this change we have entered into collaborative agreements with News Corp Australia that will see us use each other's printing networks.

To be clear: this is not ACM stepping away from publishing printed copies of our newspapers. We know our trusted newspaper journalism has impact and influence in the communities we serve. In fact, these practical, sensible arrangements to cut duplication of press facilities and delivery truck routes are designed to make our newspapers stronger and more sustainable into the future.

Obviously any job lost in any industry is regrettable. The decision to shut some print sites has certainly not been taken lightly. 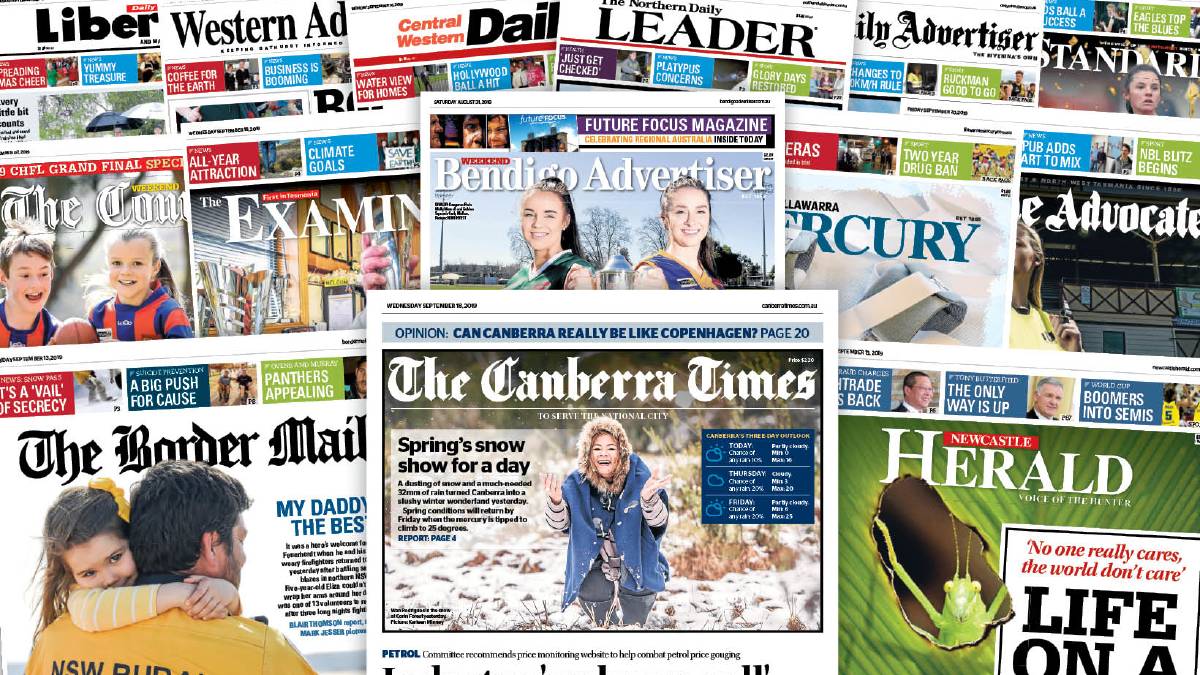 Antony Catalano: "We know our trusted newspaper journalism has impact and influence in the communities we serve".

But the reality for publishers like ACM, News Corp and Nine Entertainment Co is that rationalising how we produce and distribute our newspapers helps protect the viability of our core businesses.

For ACM, our core focus is being Australia's best regional publisher delivering quality journalism for our audiences, effective advertising solutions from our sales teams and excellent service and results for our customers.

With revenues from printing in decline and the advertising market challenged we can no longer afford to be hamstrung by big, expensive, capital-intensive manufacturing operations.

So, these changes are the prudent thing to do. It's smart business.

The industry has been moving this way for some time, of course.

We've been streamlining the distribution of newspapers for years. I recall as a young journalist at The Age that the paper would come off the presses at Spencer Street along the conveyor belt and be bundled and loaded onto trucks already carrying bundles of the Herald-Sun. Those trucks would pick up copies of the Herald-Sun from Flinders Street, come around to collect The Age and then head off on their various routes to the suburbs and to country Victoria to drop off bundles of papers.

More recently, before Fairfax Media was merged into Nine, Fairfax and News Corp entered commercial arrangements in mid-2018 to use each other's printing networks in NSW and Queensland.

With ACM's move into private ownership in mid-2019, Nine exited printing completely. But it's still the publisher of The Age, The Sydney Morning Herald and the Australian Financial Review.

News Corp has been reducing its number of print centres over the years and recently announced the closure of another in Queensland. 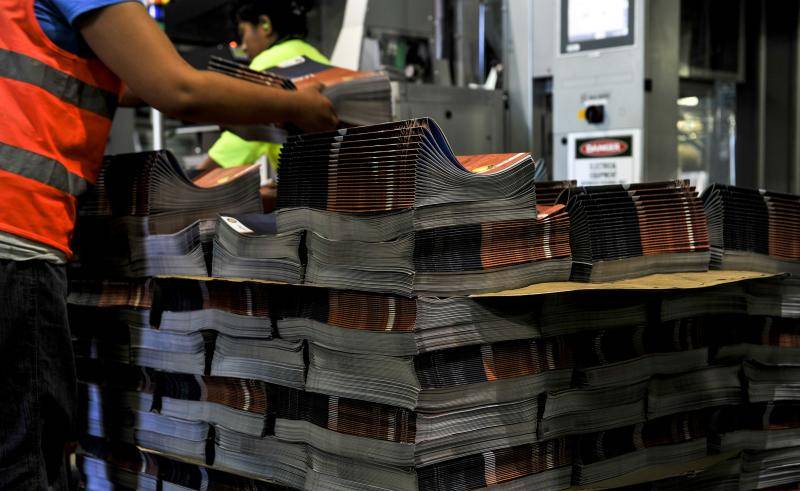 Rationalising how ACM produces and distributes its newspapers will help protect "the viability of our core business", Mr Catalano says.

With Michael Miller at News and Hugh Marks at Nine, ACM has been looking for the best outcome for our industry. We've parked egos at the door and left behind the traditional media rivalry so we can get better, more rational, outcomes around printing and distribution.

That doesn't mean we won't still be competitors on content, advertising and subscriptions. What really matters is the competition around the journalism, and that competition will still be fierce.

Indeed I believe competition flourishes as a result of these changes. Nine's publishing business - the old Fairfax - will be more profitable out of rationalisation. ACM and its 150-plus titles will be more profitable as will News, given we will both retain more cost-effective print centres as a result. And if you are improving your profits you're not having to make the kinds of continual cuts the industry has seen over the past decade.

The question ACM has been asking is: what business are we in? The answer: we are a print and digital publishing business serving regional Australians. And we don't need to own expensive factories to achieve our goals.

The old-school mentality was that if you had a newspaper you printed it yourself. And there was a time when you could afford to do that. But there are also plenty of publishers who don't own presses.

We currently print The Saturday Paper, for example, and it competes against us, The Age, The Sydney Morning Herald, The Australian and others. Morry Schwartz who owns The Saturday Paper doesn't say "I have to own a printing plant", he just contracts out that work to the best printer.

When I ran Metro Media Publishing in Melbourne, starting out with one magazine and growing it to 32 titles, we produced 1,065,000 magazines per week and never owned a printing plant.

At ACM, without these significant changes to our printing operations and operational costs, we will be continually swimming against the tide. The printed newspaper still has "great desirability for a significant part of our audience".

The printed newspaper still has great desirability for a significant part of our audience. I'm a big believer that digital brands are stronger with print and there's lots of evidence to demonstrate that. But nobody thinks of ACM as a manufacturing business. We're in the news business. We're a regional media company.

And, if we aren't anchored down by the massive capital expenditure required to maintain these manufacturing plants, we can put the savings towards our journalism, the distribution of our journalism and development of digital marketplaces that will transform our revenues.

The impact of COVID-19 on the Australian economy has no doubt accelerated the need for this change. We've already seen News and other publishers close titles due to the pandemic. ACM has worked hard to be able to resume printing dozens of our suspended titles, and that has been through prudent financial management. But the virus has changed the face of our industry, and we will be feeling it for some time yet. Like many companies, we need to make smart decisions now for the future of our business.

Our future is as a capital-light business focused purely on our publishing enterprises in print and digital and on the digital marketplaces and trading platforms that will provide new revenues to sustain our journalism in the years ahead.

The story Antony Catalano writes: why we're stopping the presses first appeared on The Canberra Times.