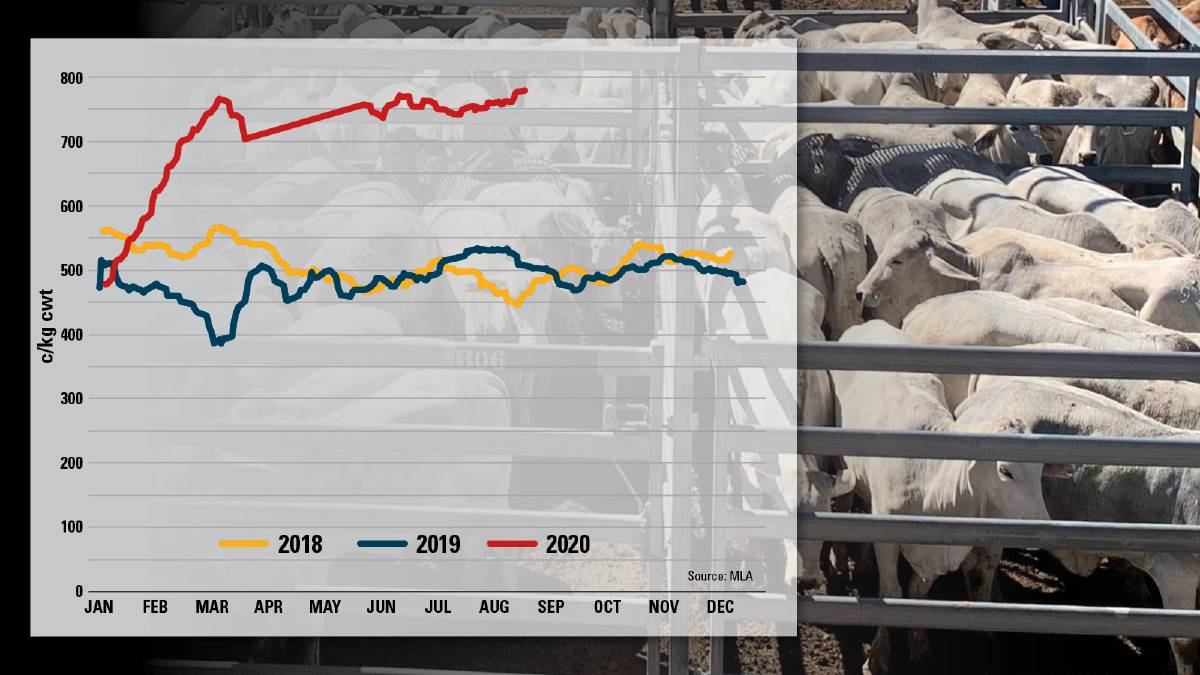 HEADED UPWARDS: The Eastern Young Cattle Indicator's phenomenal 2020 journey looks to finish the year nipping at the heels of the 800c milestone.

FEVERED restocking has shifted into a race to rebuild that is pushing young cattle prices skyward, with heifers leading the charge.

Heifers are now worth as much as steers, sometimes more, as the reality sets in of shrinking supply against a backdrop of paddocks already full of feed and one of the most favourable spring rain forecasts in years still to come.

The Eastern Young Cattle Indicator has set a new record four times in the past week to now sit at 784 cents a kilogram carcase weight, up 34c in the past four weeks and a whopping 278c above the year-ago level.

NSW is exerting plenty of influence on the cattle market at the moment with carrying capacity throughout the New England, into Tamworth, Gunnedah and through the Central West butting up against lack of supply.

The big numbers of restocker cattle that have come down from Queensland in the past fortnight is only expected to ramp up further with the easing of border restrictions for agricultural purposes this week.

Throw in the Bureau of Meteorology models pointing towards the development of a La Nina weather pattern - thus a wetter-than-average spring for Eastern Australia - and the recipe is there for super fierce restocker competition and the herd finally moving officially into rebuild.

NSW producers are also shopping south of the border, although agents say the heavier Victorian weaners are creating a price-per-head that is now edging on being restrictive.

South Australian agents have reported a chain effect from the NSW demand, whereby Victorians are taking the big money, then looking to restock at their sales.

Meanwhile, the grassed up NSW fellows are stripping their coastal sales of all that's on offer, creating situations where traders this week as much as quadrupled their purchase price.

Weaners being sold now are paying for the total cost of cow-and-calf units purchased earlier this year, which at the time were considered expensive.

With larger yardings in Queensland - Roma, for example, yarded close to 6500 yesterday compared to Dubbo's 700 on Friday - even larger numbers of northern cattle are expected to make their way south over the next few months.

"Everyone is keen. We haven't experienced for three or four years seasonal conditions as good.

"On top of that, numbers are at their lowest and there are no cattle to buy locally."

The mild conditions was seeing weight gains off grass of .8 kilograms a day continue through winter on the New England, Mr Bailey said.

The majority of those cattle are likely headed for the feeder market.

Others will be finished and plenty will be looking for a market back north, particularly those with Brahman content.

"The amount of Bos Indicus content in New England paddocks at the moment has never been seen before," Mr Bailey said.

"We've personally been pretty selective, with specific markets in mind, but in saying that it's unknown for us to buy cattle out of Central Queensland before."

Some NSW producers got in early and went back into breeders but the lack of supply on the female side was now proving very limiting for anyone with those plans, he said.

Many agents said it was becoming clear the numbers of heifers that have been able to be retained was higher than previously thought. That is driving hot demand for heifer bulls.

The big money for heifers in the store market was also on the back of solid improvements in quality in recent years, whereby those on offer are really surplus-to-requirements rather than heifers that have been culled, agents said.

Meanwhile, it appears a number of Queensland producers are opting to sell as weaners rather than feeders at the moment, to both take advantage of the strong market but also because their season has been patchy.

And people who would normally stick to one type of trade were willing to 'have a go at anything' at the moment, including little cattle or heifers to join to bulls, he said.

"Whatever presents as a good opportunity on sale day is what they're interested in," he said.

South Australian agent Chris Manser, Green Triangle Livestock at Mount Gambier, said the strong heifer demand in his state was underpinned by the push to rebuild but amplified by strong feedlotter interest.

"Feedlots around here are coming back in as soon as their stock goes out," he said.

Good rain in the past fortnight had set things up for spring nicely and pumped a lot of confidence into the market, he said.

"The average price at Wagga Wagga this week, for example, was higher than the EYCI - that really speaks to intent in NSW at the moment," he said.

"We have long predicted breeding stock would be in very short supply and that would push prices into record territory."

How high can they go?

JUST how high young cattle prices go now will largely come down to confidence in the heavy steer price holding up, analysts say.

Global market uncertainty and processor shutdowns so far does not seem to be exerting a lot of downward pressure on finished cattle prices.

The heavy steer indicator is sitting at 353 cents a kilogram liveweight, having jumped in the past few days.

But as the EYCI heads towards the 800c barrier, at what point will the expense of young cattle be too risky?

Thomas Elder Markets put together a grassfed cattle trade matrix which shows there is still good margin in buying young cattle as high as 450c/kg liveweight while the heavy steer price can stay above 350c.

Manager of commodity market insights at Matt Dalgleish said the key was it had to hold above the 320c level.

"If you think you can achieve that when turning off next year you can spend above $8/kg (carcase weight) confidently on young cattle now," he said.

Despite headwinds such as an appreciating Australian dollar and a decline in economic growth impacting red meat demand from key export markets, the forecast was still for heavy steers with a 3 in front next year, Mr Dalgleish said.

The projection is a slow easing rather than a collapse.

ALSO IN BEEF: What makes the ideal cow?