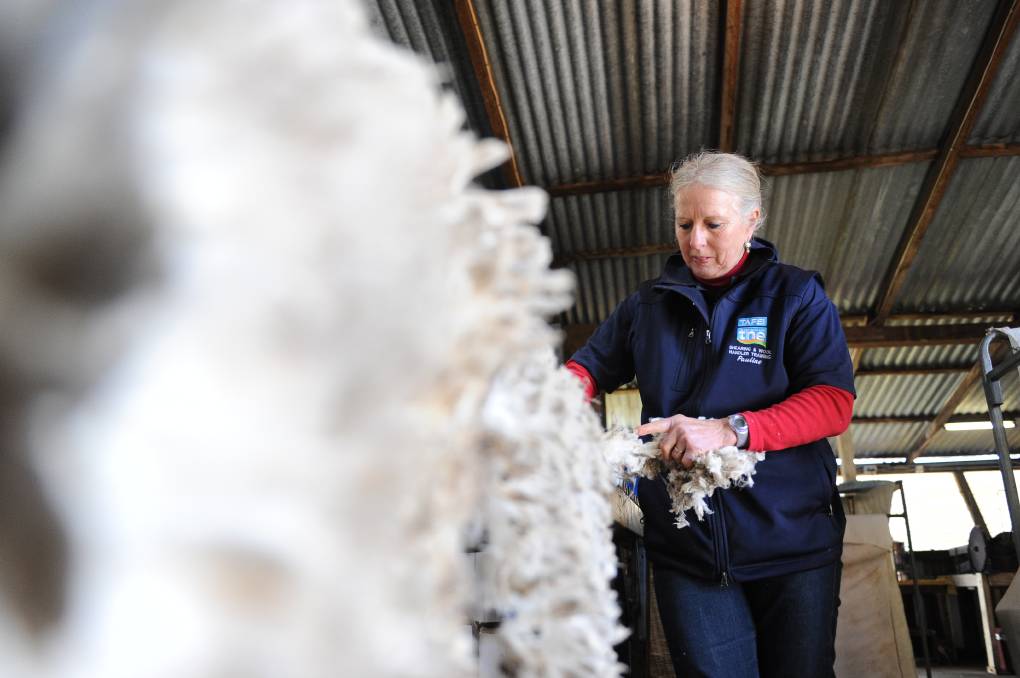 Growers are holding an estimated 300,000 bales of wool on-farm as the market continues to bump along at low levels.

It was another fairly lacklustre affair at Australia's wool auctions last week, with only Sydney and Melbourne centres in operation. Fremantle sat on the sidelines, as did South Africa.

So, a very small total of 20,000 bales was on offer to the trade - but this failed to ignite any frenetic activity.

The market overall was positive, but the summary report was weighed-down by a big volume of low-yielding medium Merino, as well as a swag of crossbred wool - for which it was difficult to find any enthusiasm for among the buying and processing trade.

Some of the better superfine wools performed quite well, although there were certainly no reports of 100 or 200 per cent jumps for the premium lots in the dour COVID-19 environment.

Premiums for superfine Merino are starting to open up again, over admittedly depressed medium Merino prices.

But it does represent a sign that the market is functioning as it should, and not just dumping every type.

For a change, the currency played little part. Stable exchange rates provided virtually identical movements in both local currency and US Dollar terms last week, with a drop of 16 cents a kilogram for the overall Australian Wool Exchange Eastern Market Indicator (EMI).

The Euro strengthened slightly, so prices overall were only 6c/kg lower for the week in that currency.

The processing fraternity is still desperately searching for demand, without much success.

If the preceding six months had not been quite so horrific in terms of price movement, the trade would be a little more circumspect.

Late August is always a quiet period in the wool processing calendar.

But having endured a drop of 40 per cent in US Dollar values in the year that everyone wants to forget, every person involved in the textile chain is looking for a bit of a reprieve.

It is not until September that retailers will have completely switched over their seasonal offering and started trying to sell some wool-rich winter garments.

Thankfully, temperatures in the northern hemisphere appear to have moderated in the past week.

And most Asian capitals are now looking at 30°C or less, rather than a string of mid-30°C days - as was the case in the past couple of weeks.

So, while retailers are restocking the shelves with their new autumn-winter range, the knitters, weavers, and spinners are doing trials, maintenance or producing some generic stock blends.

They cannot make any firm decisions about which types to produce until feedback and early indications start coming back along the pipeline from the retail end about what quantities they may seek - and what styles or colours they think they will want.

Moving back one step further, and the topmakers and carbonisers are getting absolutely nothing to go on.

Their customers are waiting for their own customers to do their thing, so the early stage processors are in no-mans-land.

Normally they would be taking a punt and producing the types they think will be relatively easy to offload in the next month or two.

But, having already a fair bit stacked-up in the shed - and having seen 40 per cent of that value wiped-off in book value so far in 2020 - they are now very hesitant to do much at all.

A big chunk of capacity has now been switched off in the early stage sector as it waits to see what the new season looks like.

This obviously reverberates back through the exporting trade to a very lacklustre auction room in Sydney and Melbourne.

It will change, as it always has in the past 100-odd years.

Wool is still very much a cyclical product, as much as it looked as though we may have been able to break out of the regular succession of ups-and-downs a year or two ago.

So, at some point, the market will go up again - and probably just as quickly as it came down - at least for the first 50 per cent of the magnitude of the fall.

This week sees Spin Expo take place in Shanghai, with spinners promoting their wares, in person and also virtually to their customers around the world.

Knitwear and woven fabric exhibitions will follow in coming weeks, not just in China but across Europe as well.

Traditionally, these exhibitions would provide a launching pad for the new styles and creations for the 2021-22 season and provide some impetus for processing activity along the pipeline.

It will happen, but against the backdrop of the past six months, people will be understandably cautious.

Early stage processors also have one eye on the grower stockpile in Australia, which current estimates put at about 300,000 bales.

They clearly do not want to jump into auction and load-up with greasy wool for September, only to see a deluge of this wool come onto the market and push prices down again.

How much of this wool remains in long-term storage, rather than being dumped onto the market at the first signs of a recovery, is obviously unknown.

Much will depend on the collective cashflow requirements - and determination of fair value - versus the optimistic viewpoint that the traditional cycle will reassert itself at some point in the next six months.

Confidence is the only missing ingredient at present, and the industry needs a boost of this all the way along the pipeline.

Exactly what the trigger will be to reinstate confidence among the consumers of the world is difficult to predict.

But a vaccine for COVID-19 would certainly be one heck of a start.

The festering problems of the Phase One trade deal between the US and China appear to have been given a boost, with trade officials from both sides reaffirming their commitments recently.

Business activity across the US and Europe seems to be trending up, with a slew of recent data pointing to continued recovery - despite the odd new ripple of virus outbreaks or hotspots.

The wool market needs to weather the storm for another three or four weeks, and hopefully without too much downside.

But that will be solely dependent on the old adage of supply and demand - with the processing trade seemingly having a reduced appetite for only about 30,000 bales per week, at most.