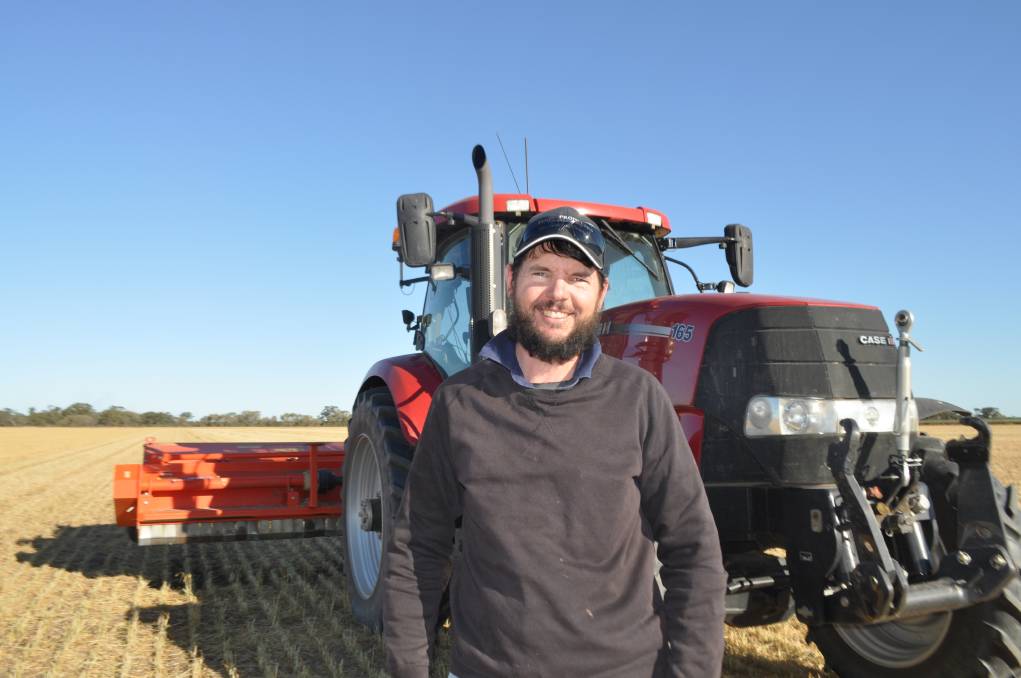 Phil Atkinson, Griffith, is one of many southern NSW growers deciding to forgo their best cereal crop harvest in years in order to make more room for rice.

What makes growers consider spraying out their best crop in years?

What does it take to decide to spray out the best cereal crop you've grown in years?

For some growers in southern NSW, attractive rice prices and improved water availability has been enough to make them consider forgoing a cereal harvest in order to produce more rice.

Over the past two years, the rice harvest shrunk to some of its lowest volumes on record, with only 45,000 tonnes grown last year.

But this year, more water availability and competitive contract and pool pricing from SunRice has meant rice is emerging as the summer crop of choice for many growers in the Murrumbidgee and Murray valleys.

Phil Atkinson, alongside his father Jim, grows wheat, rice and tomatoes at their property just east of Griffith.

Mr Atkinson has sprayed out 70 hectares of his wheat crop to make way for more rice, which he plans to plant in the first week of October.

"It goes against the grain to spray it out," Mr Atkinson said of his wheat crop.

"It might have gone five tonnes per hectare if we'd given it a water.

"But, we have had our finger on the trigger for a while, the wheat prices are pretty grim compared to what's been offered for rice."

New season wheat is currently attracting around $245 per tonne and barley is sitting around $185/t. The prices are a stark difference to the $475/t contracts SunRice have announced for common rice variety Reiziq.

It goes against the grain to spray it out. - Phil Atkinson, Griffith grower on his wheat crop.

The Atkinsons took out contracts for part of their rice country when the fixed prices were released in July, but the decision to make room for more was triggered late last month, when for the first time since 2018, SunRice announced a price pool - offering growers $390/t to $450/t.

"Dad was pretty keen to spray it out earlier (the wheat), but I thought we should wait until there was a pool opened," he said.

Another key duck in the line was water availability.

Murrumbidgee general security allocations have jumped to 46 per cent and Mr Atkinson said they also managed to buy temporary water at $155 per megalitre.

"The price has gone up a bit now (to around $175/ML), but hopefully we get some more rain into the catchment and the price will tank," he said.

Mr Atkinson said they were now viewing the wheat they sprayed out as a cover crop and he was interested to see whether it had any impact on rice yields.

"If we get in this situation again, I would be interested to have a go at putting a proper cover crop in, probably something like vetch, and seeing what happens," he said.

Mr Atkinson is far from the only grower in the district deciding to forgo a cereal crop harvest in order to plant rice.

Griffith contractor Warwick Collis said he was flat out with requests from growers looking to make silage from their cereal crops before the rice planting season began.

"We can't keep up with the work, I've only taken on what I can," Mr Collis said.

"I have seen this happen before, maybe around 10 years ago now."

Mr Collis said forgoing a harvest was a difficult decision for growers to make, but in the end it all came down to the numbers.

"One farmer said to me that every time he sits in his office and does his numbers, he decides he needs to get rid of his barley crop and grow rice, but when he walks into his good-looking crop he thinks 'I can't do this.'"