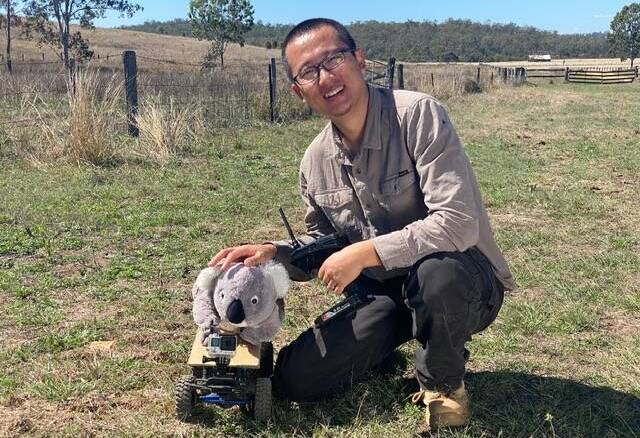 Far from being harmless herbivores, cows across Australia could be trampling koalas to death, a University of Queensland researcher says.

"For years veterinarians, farmers and wildlife carers across Australia have been reporting serious injury or death of koalas due to cow trampling," Mr Jiang said.

"This is largely based on animal autopsy evidence, mainly finding hoof prints on dead koala bodies - they're clearly acting aggressively to these poor animals.

"There are witness statements from farmers confirming that cattle have been seen chasing koalas in paddocks.

"And it seems that, while koala populations are in significant decline due to de-forestation and urbanisation, a substantial number of koala habitats are either bordering or overlapping cattle grazing land.

"We're keen to better understand the interactions between cattle and koalas, in order to work out the likelihood and frequency of such incidents in the wild."

Mr Jiang said the use of a plush toy koala riding a remote control car was probably one of the study's more creative methods for gathering data.

"Right now I'm spending a lot of time out in a paddock, attaching a fake koala - sprayed with koala urine and faeces - to a radio-controlled car, and driving it through herds of cattle," he said.

"I'm also driving around an RC car with a plush dog toy and a regular RC car too.

"If the cattle react differently to the car with the faux koala, that is, they're more aggressive than with the regular RC car, we can be confident that their reactions are because of the fake koala.

"We'll also be taking an online survey of wildlife carers regarding the occurrence of cattle-inflicted injuries and deaths of other animals.

"And finally, I'll be monitoring changes in koala home range size and location, before, during and after sharing space with cattle, which may reflect their distress caused by a cattle threat.

"Bulls and cows with calves tend to be more aggressive and protective than cows without calves, so these three groups of cattle will be tested separately."

The researcher's results hopefully will inform future management strategies to protect vulnerable koalas from bovine threats to its survival, but also to facilitate emerging forms of agriculture.

"A 'koala beef' concept is being developed, which encourages the preservation of koala fodder trees on grazing lands, so that cattle and koala can co-exist," Mr Jiang said.

"But so far, there isn't any research on this koala-cattle interaction.