An escalating row on the waterfront at Port Botany in Sydney has damaged vital rural export contracts and delayed imports such as machinery and chemicals.

One shipping company was so fed-up with the union "go-slow" it dumped 600 containers at the Melbourne port instead of the intended destination of Port Botany.

Dubbo's Fletcher International Exports boss Roger Fletcher is livid at the continuing dispute - and not blaming either side - that has placed his meat export contracts under threat.

One Korean exporter he was due to get meat to in 20 days, he's had to tell them they won't get the sea delivery until 50 days. Each changed shipping schedule involves another swathe of shipping documents that Fletchers have to draw up.

Other major regional-based affected by the Sydney dispute includes Manildra, Visy and also aluminium exporters. It does not affect bulk shippers.

In a concerning move, international shippers have now started charging a "congestion fee" to cover costs of $25,000 a day for every day a vessel is forced to remain idle while waiting to come into Port Botany.

The Australian Peak Shippers Association said this would equate to an extra $5 a bale for cotton and $17 a tonne for wheat to be exported, cutting heavily into already diminishing margins for farmers. They say the Federal and State governments have been reluctant to intervene in the dispute. The Shippers are concerned that Patrick has been reluctant to go to the Fair Work Commission to try and resolve the dispute, and in a letter on Friday urged them to do so as quickly as possible.

Discussions at the highest level including with the Federal Government have failed to reach a solution. The dispute started with several stevedores, with one with DP World close to resolution, but the main one now centres between Patrick and the Maritime Union of Australia over a new enterprise agreement, with the union fighting to stop major changes to working conditions that would see "50 pages of the workplace agreement torn up".

At the moment the MUA has a ban on overtime and upgrading to higher positions at Patrick. It held one four-hour stoppage.

In retaliation, Patrick has refused to pay leave to the MUA workers. Sources say the dispute is likely to "get worse before it gets better".

The union says it offered a one -year rollover in the negotiations over new enterprise agreements to help keep business flowing during the COVID crisis but the stevedores knocked them back.

Mr Fletcher said the dispute couldn't come at a worst time for Australia's economy as it seeks to emerge from the coronavirus recession, the worst recession in 90 years.

It's believed shipping companies including Maersk have lost millions of dollars with ships forced to wait to dock at Port Botany, some actually giving up and sailing to Melbourne instead to unload.

"I'm only one of many affected but I'm the only one who is speaking out," Mr Fletcher said. 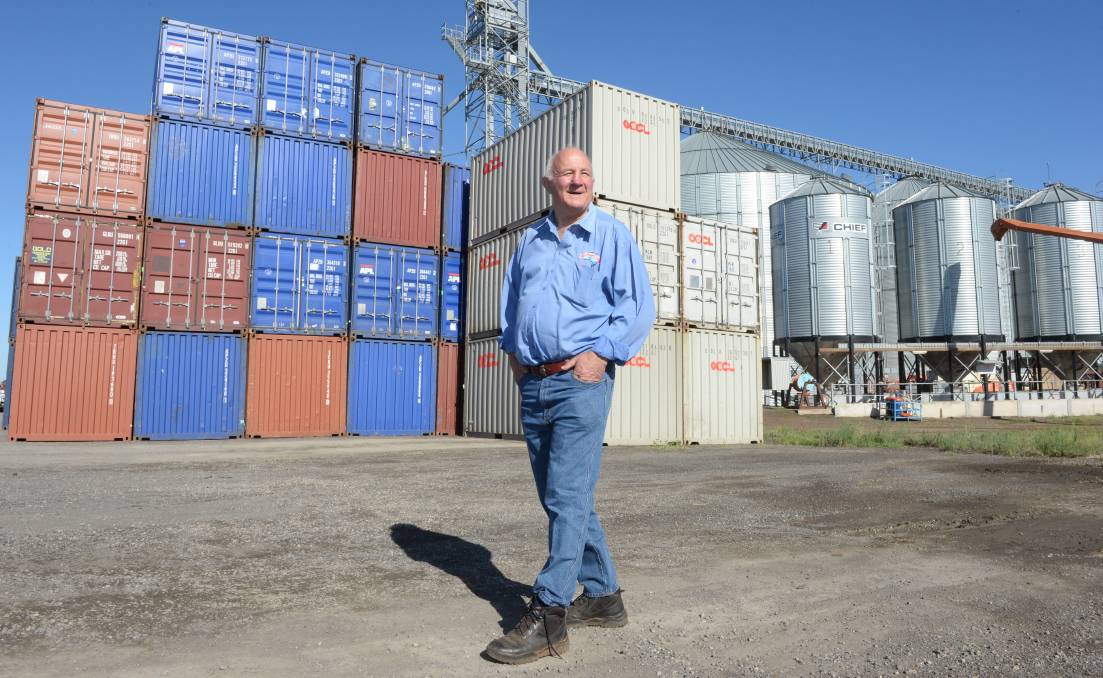 Fletchers has been stuck in the middle of the worsening workplace dispute at Port Botany with up to 30 days delay to exports. Roger Fletcher has called on all parties to resolve the issues.

"We're trying to do our best in these very challenging times and these little people in the middle, and I'm not pointing the blame at either one, are having their dispute and hurting my business. All we want to do is help get this country going. All of a sudden you get sideswiped by this little group of people."

He said three weeks of talks between the Federal Government and shipping groups and exporters had failed to find a solution.

He had chilled meat products that needed to be moved off the wharf and contractors in Korea and England were asking what has happened to their orders. "What do you think they're going to say to us ? They are going to say we can't trust you and go somewhere else."

"The shipping companies now see Port Botany as a dead port and are just cutting Sydney out."

National Farmers Federation chief executive Tony Mahar said the actions of the "MUA are threatening to choke our recovery from drought and COVID-19".

"Port Botany is critical for getting products like red meat, pork and cotton to our overseas markets," Mr Mahar said.

"The grounding of passenger flights has made us far more reliant on shipping for perishable products.

"More than ever, we need Port Botany running smoothly. Instead, we have vessels delayed by up to 18 days, and surcharges piling up. The union needs to show some humility, and think about the bigger picture.

"Trying this on now puts our customer relationships at risk, and it could pull the rug out from under Australia's economic recovery."

The Australian Peak Shippers Association chief executive Paul Zalai sent a letter to Patrick today, obtained by The Land, outlining its concern the dispute should be resolved as soon as possible.

"Vessels are now by-passing Port Botany, discharging goods interstate and leaving importers to organise and pay significant logistics costs to move freight across state borders back to Sydney; and . delays in cargo receipt are affecting 'just-in-time' orders and threaten to leave consumers short of product as we enter the peak demand retail season," Mr Zalai said.

"Those with cargo discharged in Sydney are now subject to extensive delays at the port itself and are facing 'Sydney congestion surcharges' imposed by four international shipping lines ranging from USD 285 to 300 per twenty-foot equivalent unit (TEU);

"We understand that these surcharges have been initiated to cover operating costs including $25,000 per day for vessels waiting offshore to berth.

"These surcharges have been implemented without any consultation and with insufficient lead times negating the ability for importers and exporters to factor in 'landed costs' in contractual arrangements."

Mr Zalai said he was very concerned at the damage the dispute will do to rural industries.

"A major blow is that the new congestion surcharges significantly reduces (and in some cases eliminates) margins, crushing the ongoing commercial viability for many reliant on international export revenue; and . adding salt to the wounds are the cascading costs for waiting times for trains, staged storage of containers and related logistics costs directly attributable to the port congestion."

He understood many farmers were on small margins after the drought.

MUA national secretary Paddy Crumlin said the MUA was continuing to negotiate in good faith with stevedoring companies including Patrick.

"We are committed to delivering increased and demonstrated best practice productivity on the waterfront, but only as part of a social contract with the workforce that delivers improved conditions and a shorter working week," Mr Crumlin said.

"We accept our critical importance within the supply chain and to the community, however, after lengthy negotiations that have gone on for well over 12 months in some cases, the slight industrial urging to the employers to get on and finalise these agreements is legitimate.

"None of the limited, legal forms of industrial action undertaken by wharfies are capable of causing the massive delays claimed without evidence.

"Our members have worked throughout the COVID crisis to keep the economy ticking over. In fact, it was our efforts to implement separation, segregation and sanitisation protocols that ensured not one day was lost at any Patrick terminal throughout the crisis.

"In contrast, board members at Patrick gave themselves a $10.1 million bonus after claiming $19 million in JobKeeper payments from taxpayers. CEO Maurice James alone got $1.18 million, while last week every manager, from supervisor level upwards, were awarded significant bonuses.

"Rather than reward workers the efforts of workers during this crisis, Patrick is attempting to impose wholesale cuts to terms and conditions of employment. Their proposed new workplace agreement rips up 50 pages of conditions, stripping back rosters, salaries and long standing conditions; arrangements which have recently delivered the company record productivity, market share, and profits.

"The day after wharfies undertook the four hour stoppage, Patrick shut the Port Botany terminal for eight hours to undertake civil works on the new rail project. This was the third eight-hour closure for construction work at the terminal in recent months.

"Problems with Patrick's new Terminal Operating System, implemented in recent weeks, are also causing significant delays, with IT specialists still on site attempting to fix it.

"None of these substantial interruptions to operations were the result of actions by wharfies or the MUA. In fact, Patrick management recently admitted that these stoppages had put them seven days behind schedule."

Another terminal operator DP World appears to have resolved the Port Botany dispute.

"I welcome the Union's withdrawal decision as it helps our customers and enables Sydney terminal negotiations to restart, which occurred today. The discussion was very positive and I anticipate we will finalise Part B agreement in Sydney before 30 September 2020.

"For Brisbane, Melbourne and Fremantle Terminals, I reiterate that DP World remains committed to finalising Part B by 30 September 2020. The continuation of industrial action impacts our customers and the economy, and will not lead us towards agreement. If industrial action is lifted as a priority and all parties work together, I am confident that we can still meet the 30 September 2020 agreement timeline, allowing the Part A agreement from 1 October 2019 to be applied date."