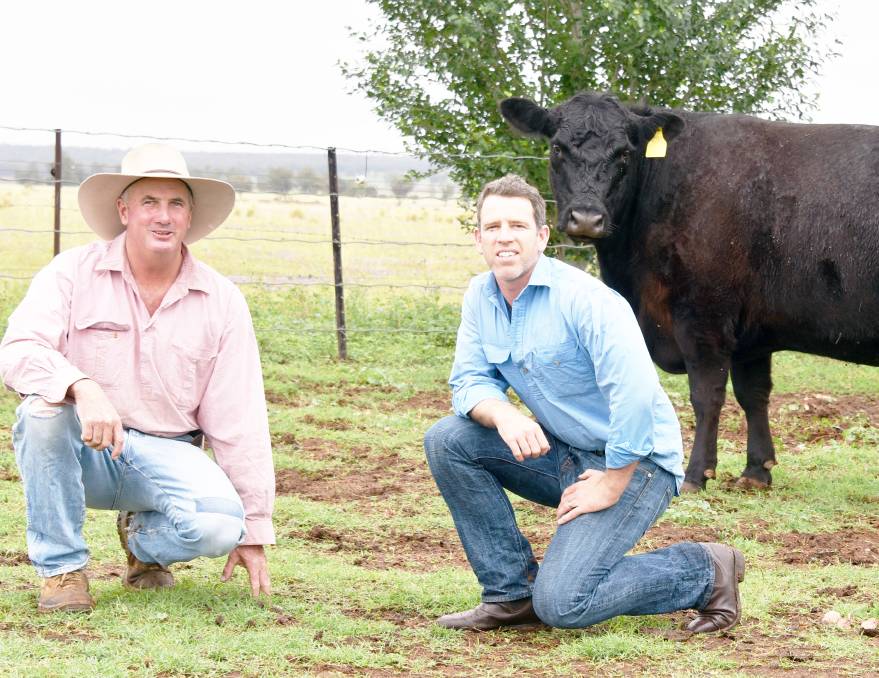 Ben Mayne of Texas Angus with Geoff Birchnell of 3R Livestock who secured Texas Pride E030 for $60,000 in a private sale. Photo: Supplied

The private sale make it one of the highest prices for a mature Angus cow.

An 11-year-old reputable Angus female has sold for $60,000 in a private negotiation that places it as one of the highest prices paid for an Australian Angus mature cow.

Texas Pride E030, a daughter of influential sire Ardrossan Admiral A2, has staked her claim in the breed with 25 sons sold at auction, topping at $28,000 three times, and more than 20 daughters in the Texas herd.

Texas stud principal Ben Mayne said E030 had been in their donor program since 2012 and produced an incredible line of quality stud sires and females that had been retained within the herd.

Initially they hadn't intended on selling the maternal powerhouse.

"There are very few cows within the industry that can claim to have the maternal power this 11-year-old cow features," he said.

"When Geoff Birchnell of 3R Livestock, Tamworth, approached us about purchasing E30, we had never even considered selling such a cow, but with some outstanding daughters coming through the ranks, including Texas Pride L600 (the Dam of Texas Nasa N121) who is now also a highly valued Texas donor cow, the sale was negotiated.

"Geoff and I share a very similar view of what we foresee as profitable, efficient cattle that will survive and thrive in Australia's challenging environment."

For several years, Mr Birchnell had taken particular notice of the breeding ability of E030 and admired the maternal strength she possessed.

"Texas Pride E30 is exactly what we are focussed on producing at 3R," he said.

"We place great emphasis on the maternal aspects of our program and E030 offers a complete combination of phenotype, maternal performance and a deep pedigree of proven genetics."

Pride E030 will be utilised in the large-scale 3R embryo transplant program.