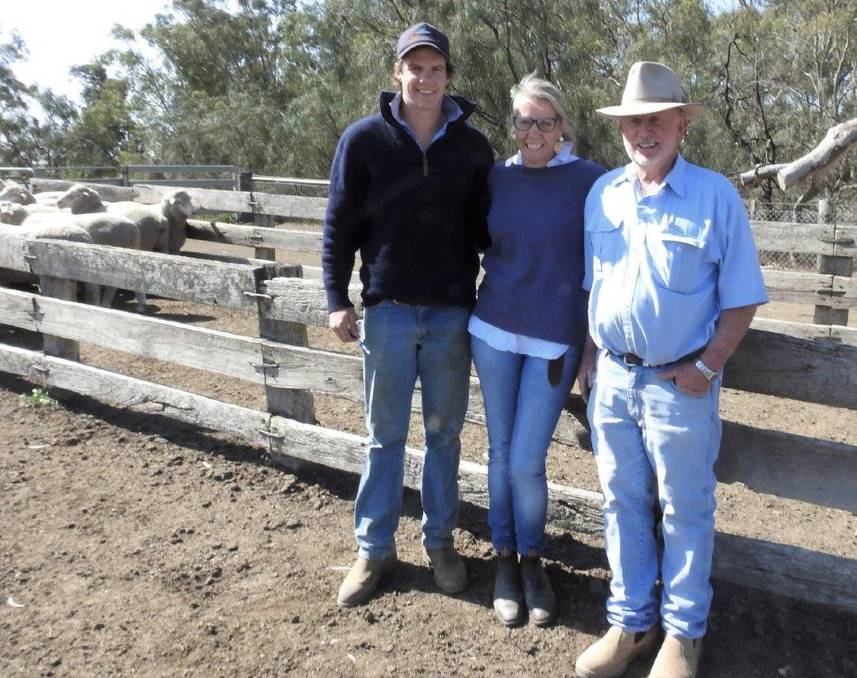 Angus Helps, Ruth Helps and Ian Clark of Yurdyilla Pastoral Co, Hay. Yurdyilla were one of the volume buyers, purchasing a total of 19 rams. Photo: Supplied

The Pye family sold all 83 rams offered from their Uardry, Calga and DD Dohne studs at their seventh southern production sale at Caroonboon, Wanganella on Thursday.

The overall average was $2783 with a top price of $4750 for a DD Dohne ram purchased by the Holt family of Coonong Station, Urana.

Stud principal Margie Pye said they were extremely pleased with the results of their final sale for the year, with 156 rams sold over their two sales to an average $2,617.30.

Ms Pye said they have been focusing more on ASBVs in recent years, along with keeping conformation and visuals in check. The Coonamble sale rams average Dohne Plus index was 172 and the Wanganella average was 157.

"Good prices and total clearance of rams shows the immense confidence in the sheep industry at the moment after an extremely tough few years," Ms Pye said.

The ram was one of five DD Dohnes purchased by the Holt family. Mr Holt said they had been chasing the DD bloodline for some time.

"We're looking for that very dual purpose line of sheep, chasing those long staple white wool as well as fertility, we know the DDs are really fertile," Mr Holt said.

The second was purchased by AN and MA Boatman, Rhodenvale, Crowlands,Vic, he showed off a large YCFW of 19.

In the Calga section, two rams sold for $3500, the first had one of the highest Dohne Plus Index values in the draft at 182.2 and was bought by M and D Eddy, Mathoura. The second stood out for his YCFW of 25.1 and went to W and P Caldow, Edenhope, Vic.

The sale was conducted by Elders and Nutrien with Matt Tinkler and Peter Godbolt auctioneers.