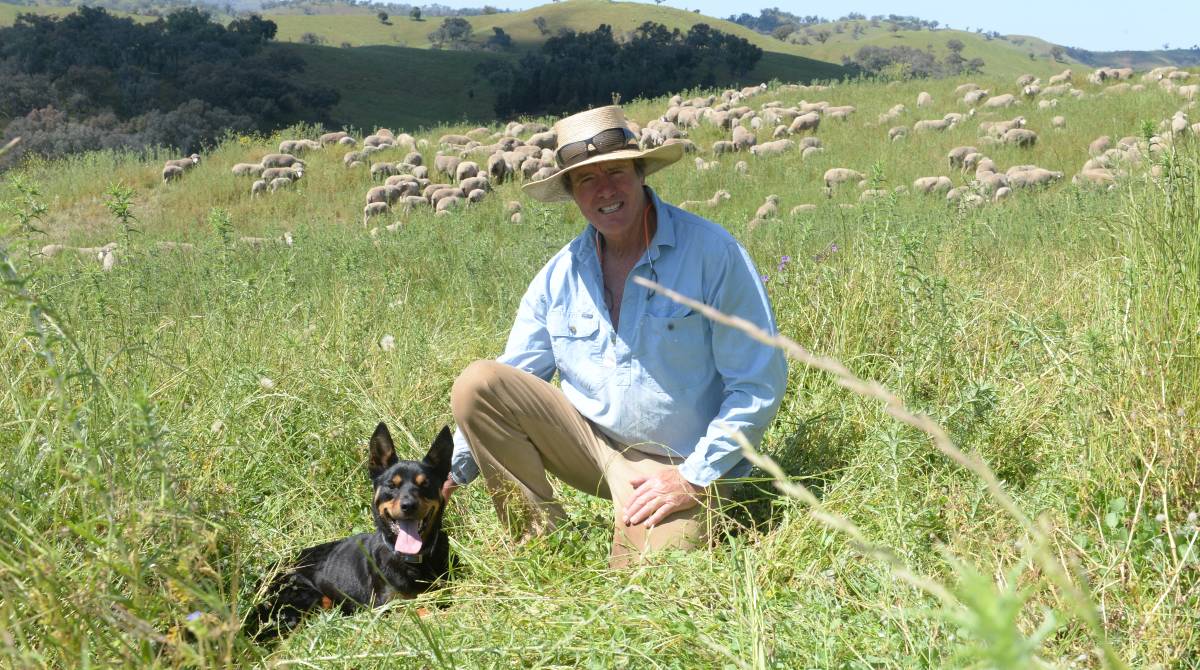 Norm Smith and his Kelpie, Bonnie, with some of his stud ewes with August-drop twin lambs at foot on the slopes within the Yellow Box Grassy Woodland country on Glenwood, Wellington.

CONTINUATION of the yellow box grassy woodland stewardship project on 1600 hectares of the property Glenwood has led 2011 NSW Farmer of the Year Norm Smith to further expand his Merino breeding enterprise.

Now in its 10th year, instead of grazing for five days then resting paddocks for a minimum of 40 days as part of the contract, Norm and wife, Pip, who's operation is at Wellington in the state's Central West, rest each paddock for a minimum of 120 days.

"It's all part of our holistic management of short graze periods and long rests," Mr Smith said.

"However, we think our rest is too short and are now looking to subdivide those paddocks to allow for longer rest periods, even up to 140 days.

"This also encourages diversity of perennial plants and ground cover which give us a triple bottom line of making it financially stable for us, as well as regenerating the landscape while also being good for the production and health of our livestock."

When the Smiths began the stewardship program they also began to build a business relationship with the Angus and Lucy Maurice at nearby Spicers Creek.

This has created an opportunity where the Smiths have been able to move all 3000 commercial ewes from Glenwood to the Maurice's farm, Gillinghall, where the sheep are run on a profit-share arrangement.

"We own the livestock and we profit-share the gross income," Mr Smith said.

Three years later, the Smiths set up another partnership with the Maurices and started leasing two properties.

The Glenwood commercial ewes still run on Gillinghall, however, the Smith/Maurice partnership run another commercial flock nearby and have been buying the five-year-old ewes from Gillinghall to stock that property which will become a self-replacing flock next year.

"The aim next March is to join 2500 ewes in that flock and then fatten the wether lambs off there and class the ewe portion so selected ewes will enter the flock," Mr Smith said.

"It's something we do together, and down the track, if we wish, we can go our separate ways.

"We'll have two flocks of sheep rather than one, and hopefully we have built up some capital for our two families to move forward with."

We'll have two flocks of sheep rather than one, and hopefully we have built up some capital for our two families to move forward with. - Norm Smith, Glenwood, Wellington.

Mr Smith said leasing had been a way to expand without having to buy more land.

"We haven't had to put a whole lot more capital into our own businesses to do this, but we have been able to expand an asset base, which is the Merino flock on which we can hopefully build up for the future benefit of both families," he said.

The Smith's Glenwood Merino stud meanwhile has also improved in the past 10 years, culminating this year in the stud's best result to date at its on-property ram sale.

Of the 19 on-property sales they have held, they produced their best average, reaching $3099 for 136 rams sold into four states.

"I feel by breeding a plain-bodied Merino and selecting for density and length we are producing a highly productive and profitable Merino flock and obviously with the mulesing debate, we are still sitting in the box-seat down the track with the way that's all changing," Mr Smith said.

"We are seeing a continual improvement in our flocks which is all thanks to the SRS (soft rolling skin) breeding philosophy of the late Dr Jim Watts and what we have been implementing since the late 1990s, which has put us in a great position moving forward."

Mr Smith said he wanted an animal that's grass-fed, comfortable in its environment and is easy care and efficient.

"It's not just about the wool anymore," he said.

"You've got to have a number of strings to your bow and that includes getting lots of lambs on the ground, so we have a big focus on fertility of the flock and I think that's all paying.

This year, Maurices marked 138 per cent of lambs to ewes joined in the Glenwood flock on Gillinghall, the best the flock has ever done, according to Mr Smith.

"And the newer flock will mark about 118pc, which is still good considering the start of this year."

The Smiths had also managed to maintain significant numbers of ewes through the drought with the use of drought containment lots.

After the drought broke with rain that began falling in February, the sheep were eventually able to be moved out of confinement feeding regimes to pasture.

The ewes were joined in March, taking full advantage of the improved season and allowing the sheep to adjust to their new environment.

Another string to the Smith's bow is their LoveMerino brand, which produces individually hand dyed woollen fashions, including scarves, neck warmers, pashminas, baby blankets and throws.

Coronavirus has changed the business to a more direct online outlet with online sales having been very strong.

"I think our story is no different to any other farmer's story," he said.

"It's starting to resonate with consumers as they become more discerning about what they want. They want to know how a product is made, and where it's come from.

"They also now want to know how the animals have been treated. It's all becoming a part of the story and we are trying to take advantage of this through our retail business because we can tell the stories from the farm to the retail product."

A 'pop'-ular crop at Griffith