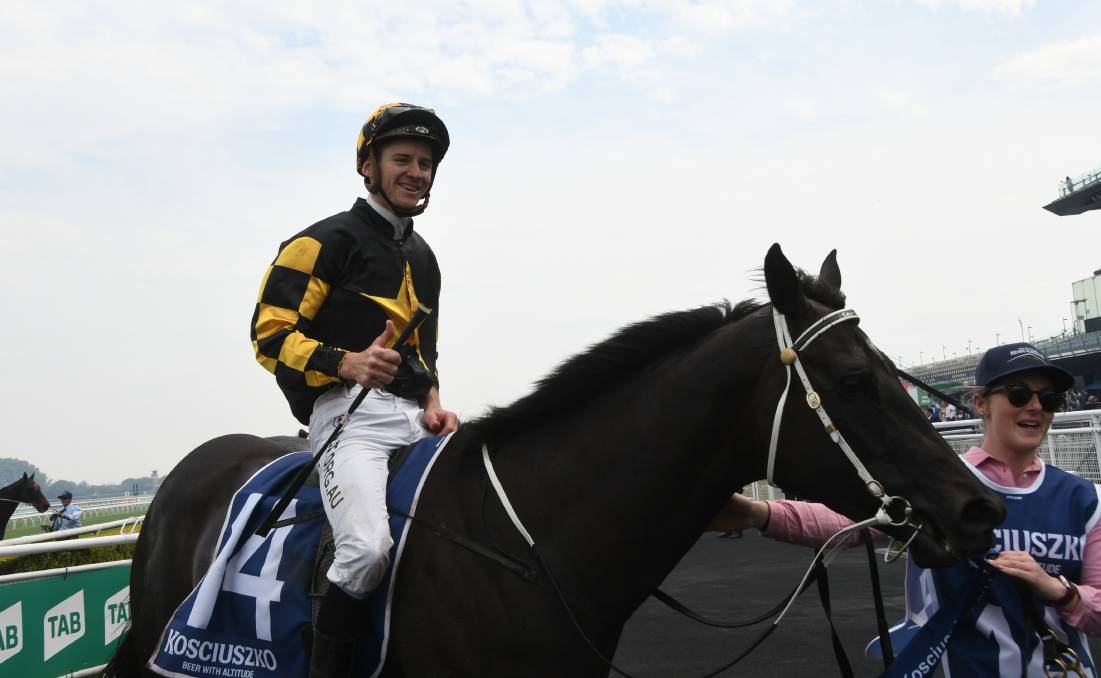 A happy Jason Collett brings Its Me back to scale after winning The Kosciuszko (with handler Rowena Dillon) at Randwick last Saturday. Photo Virginia Harvey

CAUGHT up in a traffic jam at the top of the straight, It's Me and jockey Jason Collett had to weave a path clear before unleashing blinding speed down the middle of the track to win the $1.3 million The Kosciuszko at Randwick last Saturday.

A first for the mare's emotional Scone conditioner Brett Cavanough, The Kosciuszko is reserved for country trained gallopers only, this year its third edition.

While hoop Tommy Berry had an easier rail's run aboard second placed Redouble, It's Me had to produce a herculean effort to catch the Redoute's Choice gelding (which is trained by Mitchell Beer at Albury) to snatch victory at the post.

Cavanough admitted that he was a little worried of It's Me's awkward position.

"I thought that he (Jason Collett) had a lot to do at the top of the straight, but she (It's Me) got the job done," said Cavanough.

"She is just amazing, and she put's in her hardest." 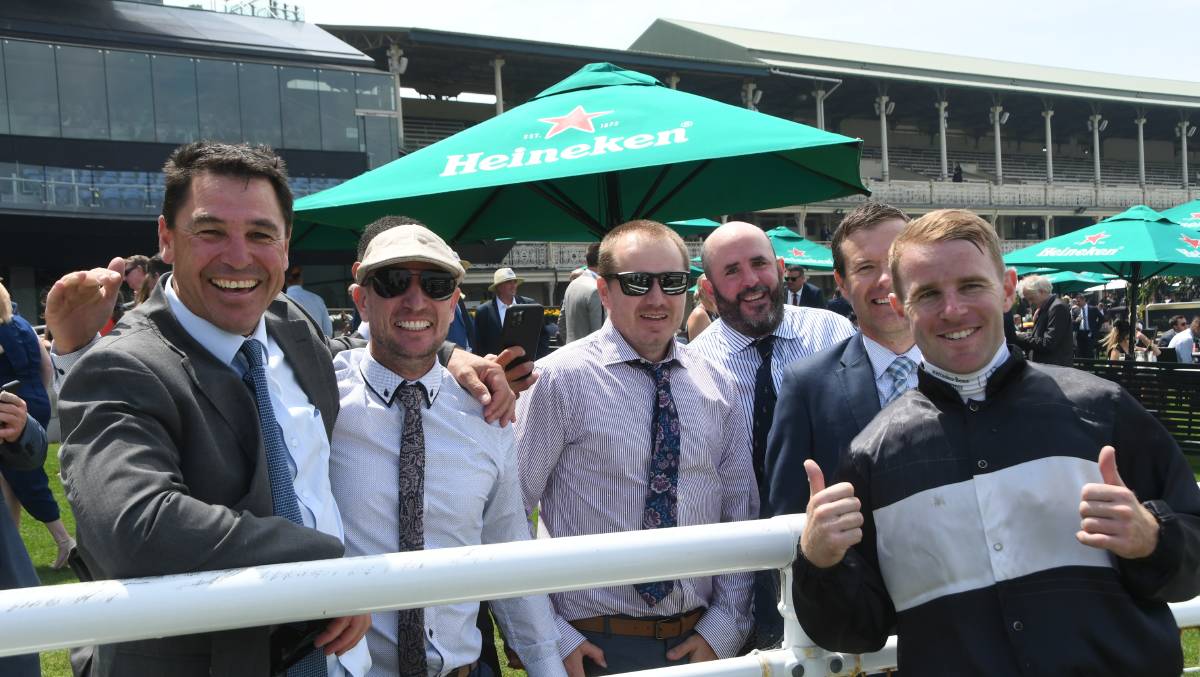 "It (The Kosciuszko) is the pinnacle for country trainers; we all want to win it."

While the owners' area was near capacity holding the throng of visiting country owners trackside, celebrations were underway for It's Me's slot holder and part-owner Bob Dailey and his connections.

Stretching her career to four unbeaten starts, the emergence of It's Me is another coup for her sire Shamus Award (following Mr Quickie recently winning the MRC Toorak Handicap-G1 at Caulfield), a Snitzel stallion which was relocated to Rosemount Stud in Victoria last year.

It's Me was born and raised at Kitchwin Hills, the Gundy district property selling the filly as agent, for $65,000 via Inglis' 2018 Classic Yearling Sale.

While there was a difference of $637,000 between the first prizes of The Kosciuszko and the earlier TAB Highway Handicap - another country trainer's only race, there was still some serious cheering in the owners' section after Air Marshal won the 1100 metres event.

By the Twin Hills based sire Smart Missile, Air Marshal was also prepared at Scone, by Mark Schmetzer, who paid $11,000 on an online auction site for the four-year-old about three months ago, and has since won two from four starts. 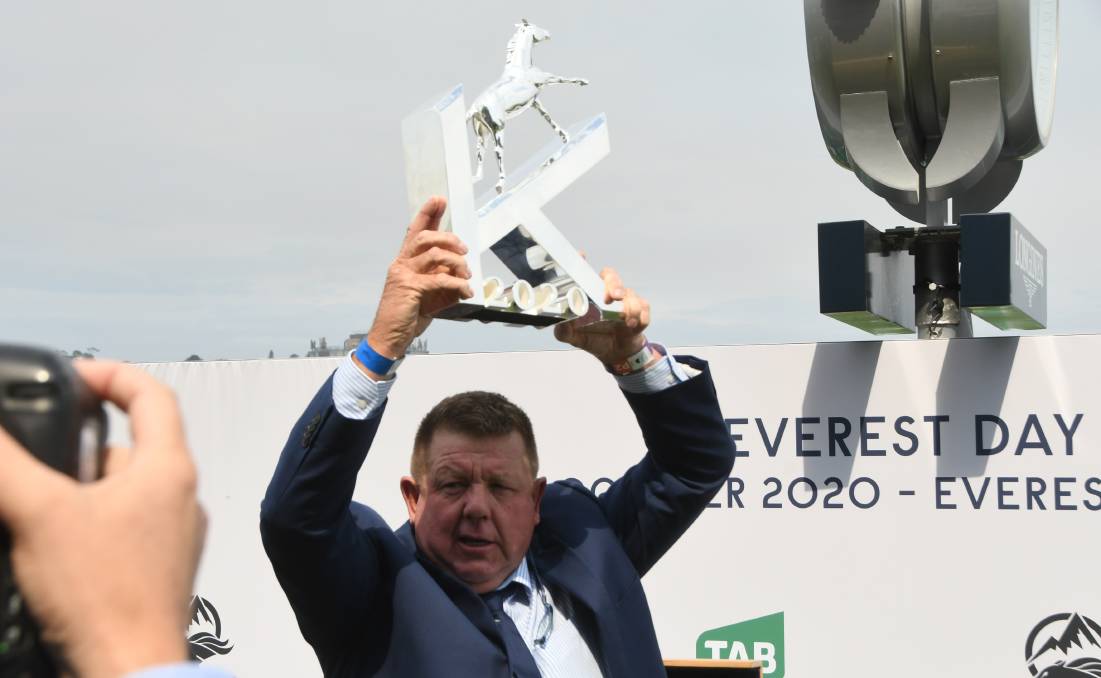 A relieved Scone trainer Brett Cavanough holding up The Kosciuszko trophy after the win of It's Me. Photo Virginia Harvey.

Not A Single Doubt gelding Classique Legend was breath-taking winning The Everest.

WHILE passing away in south-east Queensland at age 82 three months ago, the late Vince Stein left his mark via breeding and racing in the Bathurst, then Tamworth and more recently in the Beaudesert regions.

With Australia's most prestigious weight-for-age event the W S Cox Plate-G1 to be run at Moonee Valley this Saturday, it is timely to recall Mr Stein - along with wife Deidree, who created Cox Plate history almost 40 years ago.

The pair were joint principals of their Rockleer Stud, where Deidree became the first female to train the winner of the 1985 Cox Plate with Rising Prince, which was a gelding also bred and trained under her name at the Bathurst district property.

Revered as the "Bathurst Bulldog", Rising Prince also won the celebrated VRC Mackinnon Stakes in Melbourne as well as a host of Sydney stakes including the Queen Elizabeth Stakes, Chipping Norton Stakes, the Summer Cup and Villiers Stakes.

Rising Prince was bred on a cross of two sires which stood at Rockleer, being by US bred import Round Top (a winner of five races on major French tracks and which is by the Mahmoud grandson Quadrangle), and was produced from Bonlene, a daughter of GB bred sire Capricorno (by Never Say Die).

Round Top and Capricorno (both each a sire of numerous winners) were followed by GB bred stallion Shining Finish (Nijinsky), which was a prominent 2400 metres performer.