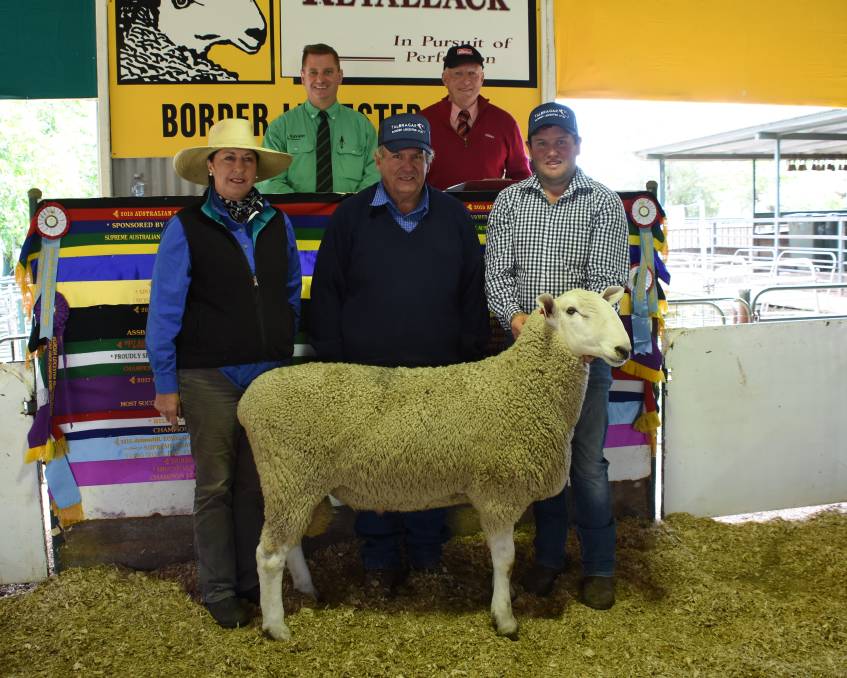 A buoyant spring and a desire to acquire industry leading genetics made the 49th Retallack Border Leicesters on-property production sale at Ariah Park on Tuesday a success.

Graham and Isabella Grinter and family offered 143 quality lots including 24 stud rams which sold to $15,000 for a complete sale clearance and $2497 average.

Ben Simmons has been buying Retallack genetics for five years now buying the top price ram on many occasions.

Mr Simmons said when he walked into the pens he was the one that really stood up right above the rest of the rams.

"The ram has a very good sirey head, good length of body, perfect structure, real heavy bone and carcase and a good heavy fleece," he said.

"We will collect semen from him with the potential for some to be available for purchase then he will be joined naturally to 50 or 60 of our top Talbragar stud ewes."

Retallack 219.19 sired by Double Callum and has been used within the Retallack stud joining to 25 ewes lambs.

Geoff and Debbie have been returning to buy Retallack genetic for over 15 years.

Mr Selms said, the length and size as well as his over correctness in the ram was a standout for him.

"The Retallack sheep have always had good bone structure and good length and this works well for us," he said.

Geoff and Debbie Selmes also purchased another ram in Retallack 482.19 for $8250.

Mrs Selmes said Retallack 482.19 was a pick for them for his figures ranking number 1 in the Border Leicester breed index of 1218.

The sale was settled by Elders Wagga with Rick Power, Nutrien Livestock and Steve Ridley, Elders Studstock as auctioneers.