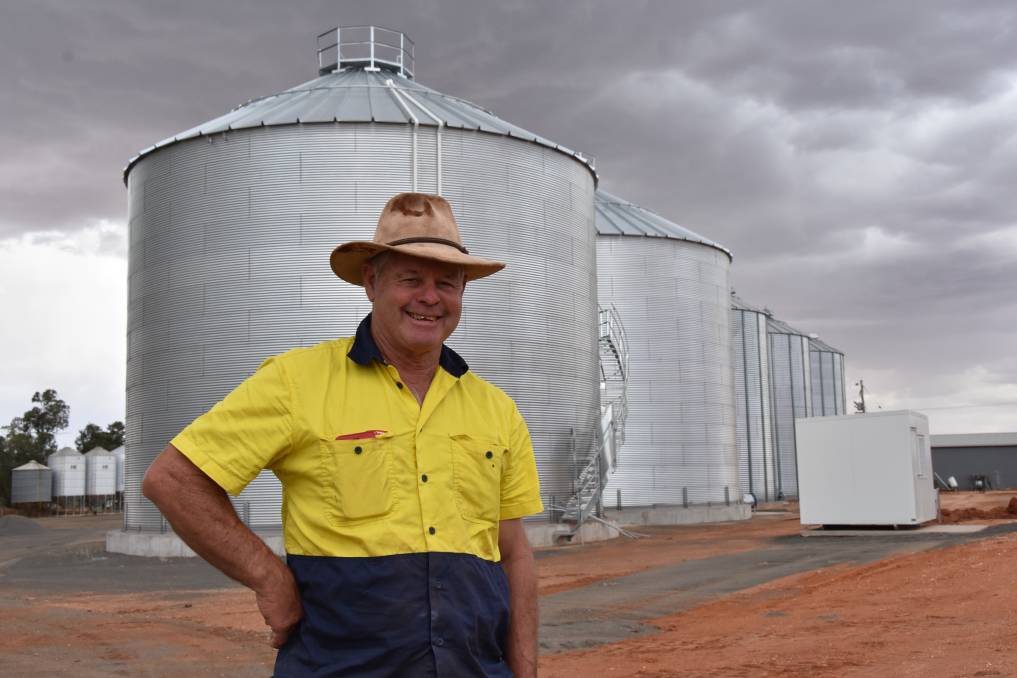 Trevor Gray with the new silos at Runnemede, Merriwagga.

IT WAS an edgy crew at Runnemede, Merriwagga, working next to a paddock at the end of October, watching threatening skies with 700 hectares of Sturt field peas to harvest.

It was early in the day and if it didn't rain, harvest could continue, but it didn't look good.

The team, with three headers ready to roll, had started harvesting early evening on October 29 then pulled up because the peas were tough and bulldozing in front of the header.

The boss, Trevor Gray, had then taken a sample to the depot for assessment.

That sample was at 14 per cent moisture, the maximum the depot will accept - 12pc to 13pc is considered ideal.

The peas were the Gray family's first crop to be harvested this season.

With a bit of luck on their side, they will be finished harvesting by Christmas.

After the peas there is 1000ha of Spartacus barley and 2500ha of Lancer wheat and 330ha of canola.

As they were just starting the peas there were two headers ready, hoping to knock the first paddock over quickly.

A new purchase, a late model John Deere S770 header that cost almost $600,000, had started on the peas, done a couple of hours and blew an hydraulic line as it was being put into the shed.

She shrugged, adding "there's always something".

"We're already a week behind, it just hasn't been hot enough yet," she said.

The couple's son Michael is there, hands on, working to adjust a MacDon front.

Header driver Irish-born Steff Ferguson is working at another machine with a John Deere engineer.

Mr Ferguson has been with the Gray family for seven years, the Grays have sponsored him and he now has dual residency, able to come and go as he pleases, not that he does.

And no-one is going anywhere at the moment, Diane hands out warm sausage rolls, blokes are jumping in and out of machines and Trevor is on his way back from Griffith with another bit of macinery.

There's some problem with one of the headers and no-one wants to talk about it. 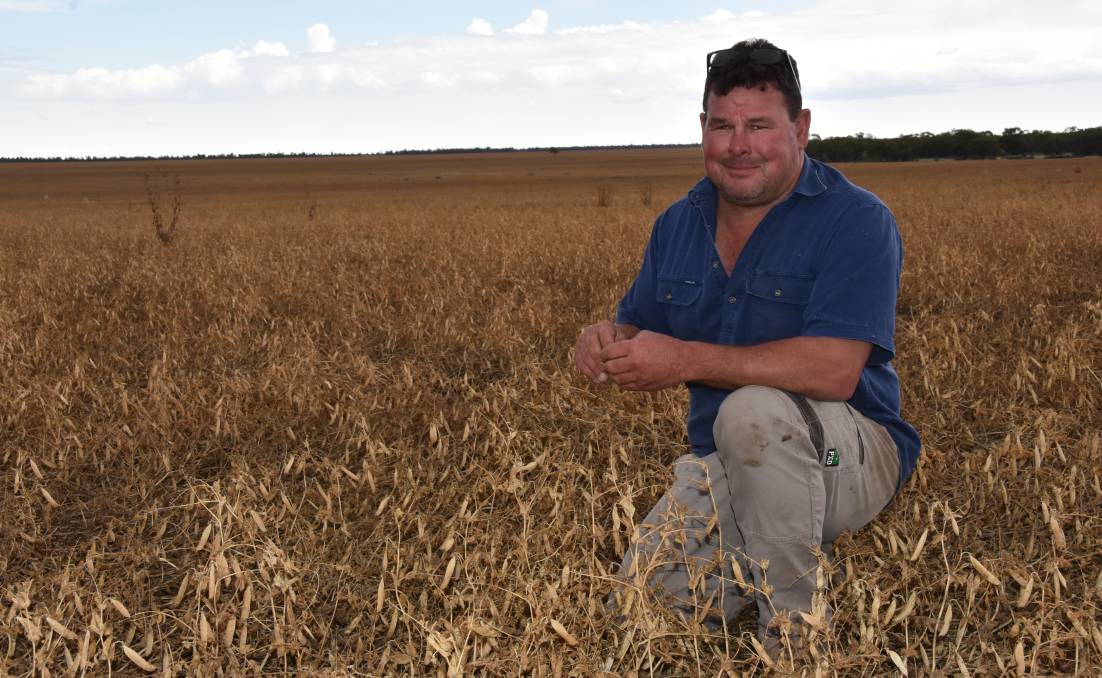 Michael Gray in a paddock of Sturt field peas. All photos: Daniel Pedersen

"We run MacDon fronts specifically for the peas," said Michael, "they follow the ground really well, nice and close.

"We'll run two headers here and one in the barley when we're up and going."

The peas, planted thick so they might hold each other up, were put in at 110 kilograms to the hectare.

All crops had 70kg/ha of monoammonium phosphate at sowing.

The wheat and barley also had 45kg/ha urea.

When the harvest can't be unloaded at the Merriwagga silos the Grays divert to on-farm storage. 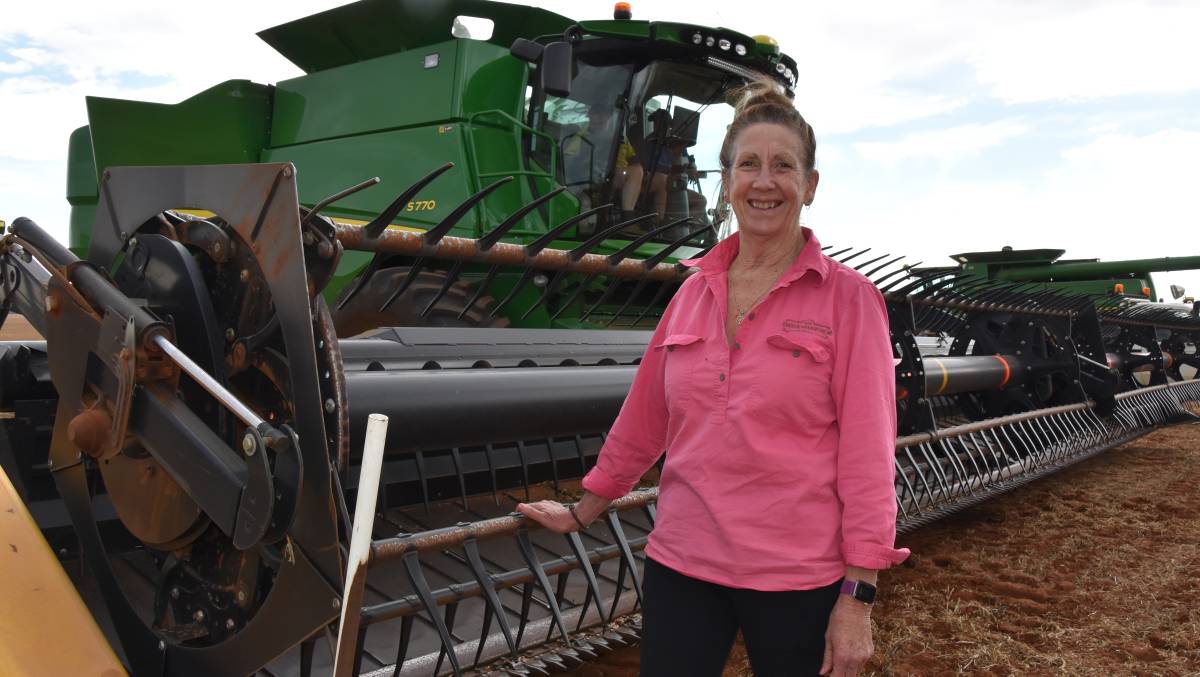 Diane Gray with one of the headers at the edge of a block of Sturt field peas.

Diane stifles a laugh when Michael says they might run the harvesters until 9pm some nights, "more like 3am", she says.

A big percentage of the peas and barley and some canola goes to feed mix for poultry producers Baiada (think Steggles and Lilydale Farms) at Griffith.

The Grays own and are cropping 5000ha around Merriwagga and share farming another 800ha and then there's 1200ha of irrigation at Moulamein.

They have no permanent livestock component in their business.

Trevor groans at the mention of irrigation water.

At Moulamein, on country fed by the Murray River and specifically laser contoured for growing rice, the Grays haven't sown a rice crop sown since 2005.

Trevor said these days because of doubtful water allocations they chose to grow a mix of winter crops and no summer crops at Moulamein.

"The first mistake they made was separating land and water, so they could buy the water back," said Trevor.

"The Murray Darling Basin Plan needs to be revisited, everyone knows it's flawed.

"We need transparency and we need to get the traders out of the water market.

"They (traders) don't even need to own land, they're just shonks.

"Just look at Moulamein, it used to be all rice.

"The Moulamein area flourished because of the rice grown there and now there's very little because of a lack of water allocation." 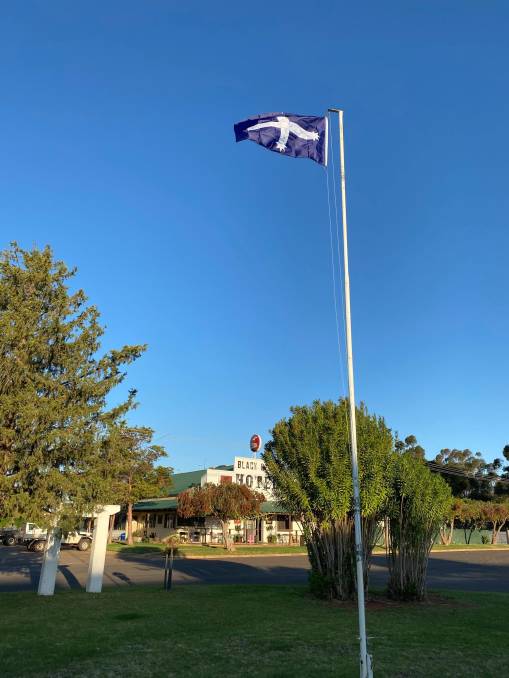 Near the house and silos stands a long trailer emblazoned with the words 'Pause the Plan'.

Diane shows me a photograph of the Southern Cross flag flying outside Merriwagga's Black Stump Hotel.

The Grays do not support the Plan in its current form.

On Tuesday morning the harvest was in full swing at Runnemede, the peas came in at 2.25t/ha, the barley 4t/ha and the wheat, just started, was recording 13.8 per cent protein and coming in at 4.6t/ha.

"I wish every season was like this," said Trevor.