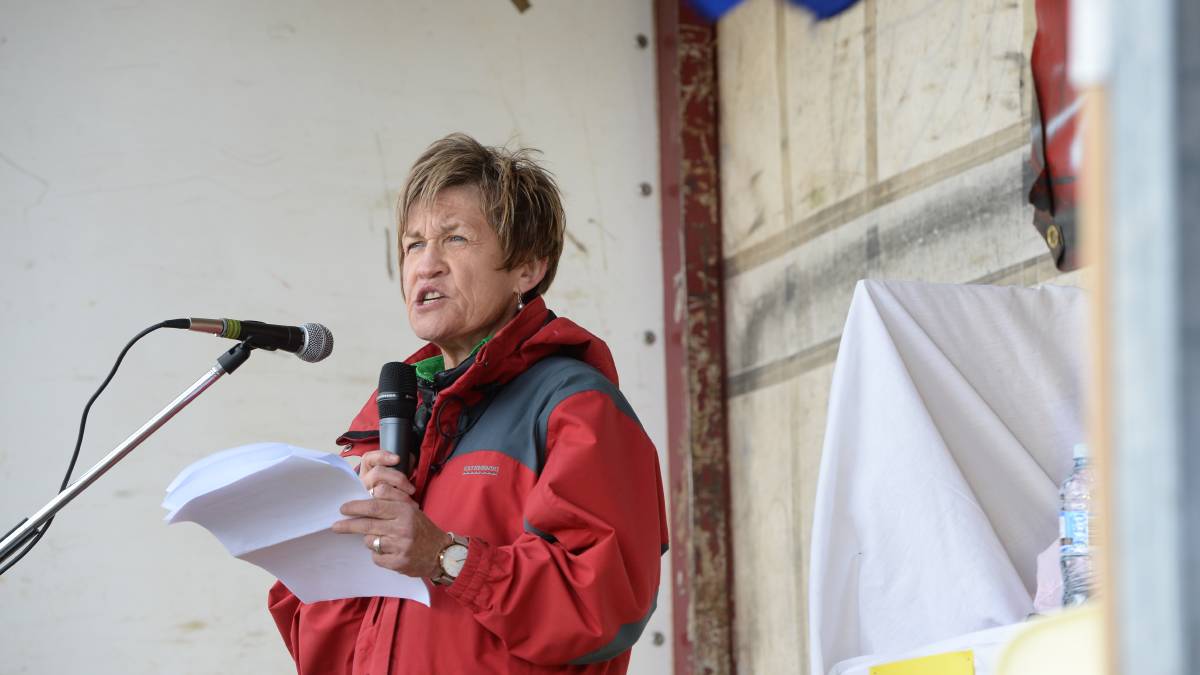 Can she survive? Murray MP Helen Dalton at the 'Can the Plan' rally in Canberra last year. Photo by Olivia Calver.

The Shooters, Farmers, Fishers Party says the planned changes to electoral boundaries in NSW will probably cost it the seat of sitting MP Helen Dalton in Murray.

The draft changes were announced on Thursday, and while the creation of a super western seat is not on the agenda, the town of Jerilderie has been added to Mrs Dalton's seat - a town that normally votes 70 per cent to the Coalition.

The NSW Nationals have indicated they are happy with the proposed changes, with NSW Nationals Chairman Andrew Fraser telling The Land the changes help retain regional representation in the NSW Parliament.

"I am pleased to see that the draft redistribution doesn't eliminate any country seats, and the proposed changes to the majority of regional seats are minimal, as we suggested," Mr Fraser said.

"We will continue to put forward our view that country communities need better access to their local MP. "While some of our suggestions were not adopted - such as addressing the fact that some regional seats are getting far too big - the commission appears to have taken on board our other concerns and maintained the number of seats outside of the Sydney basin, meaning no loss of regional representation.

"This is a positive sign for regional communities, and one we hope to see kept in the final determination."

But NSW SFF MP Helen Dalton said her seat of Murray will be harder to win as a result of the proposed electorate boundary changes.

"The NSW Electoral Commission panel says the Murray River region is losing population, so the seat needs to be expanded.

"The NSW Government need to urgently look at why people are leaving small towns, and work on reversing that trend. Simply increasing the size of seats is not the answer, it just disenfranchises neglected country communities even more."

"It means people will be living further away from their electoral representatives, and rural MPs have to cover more land mass. Our small towns are already losing jobs and services. They need more muscle in Sydney parliament, not less".

The NSW Electoral Commission's Electoral Districts Redistribution Panel has recommended increasing the size of Murray, by including the former Jerilderie Shire Council area in the electorate.

Members of the public will have until 9 December make a submission on the proposed changes, before the NSW Electoral Commission makes their final ruling.

"I know the National Party put in a submission calling for my electorate to be abolished," Mrs Dalton said. "That was a cynical ploy to rob me of my seat without letting people vote".

"I'm glad that's not happening, but this expansion still makes it harder for me to win the seat. I'll be fighting really hard for the people in Jerilderie, and will be proud to represent them. But the Coalition got more than 70 per cent of the vote in Jerilderie in 2019, so this re-jig really benefits them. We really need to address the gigantic size of rural electorates.

"Young people keep leaving our small towns, so the seats just get bigger. This favours the National Party, as young people tend not to vote for them. But it's so bad for the towns. When people leave, the government uses that as an excuse to close services and sell off assets.

"Following closure of the submissions period, a further period of public consultation will commence with comments on those submission being invited. Any comments received during this further consultation period will also be published on the NSW Electoral Commission website for public inspection.

The only other major change in regional NSW appears to be an expansion of the Cootamundra electorate into the Goulburn electorate.

"Going to see your local representative in the regions isn't as simple as a quick walk down the street, with many regional people needing to travel for several hours to see their local member of parliament.

"On the back of record droughts, devastating fires and now the economic impacts of COVID-19 I'm pleased that for the first time in many years the bush has not had to lose another seat to the city."