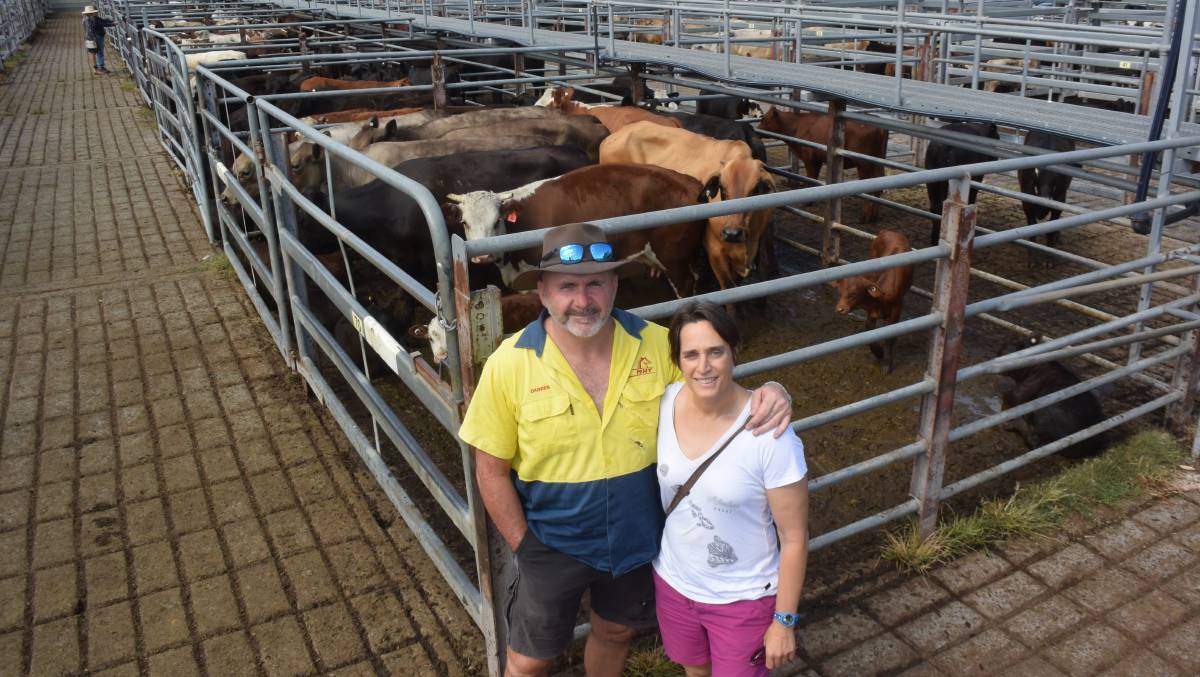 Darren and Heida Bell, Nana Glen at Thursday's Grafton store sale where steers sold to 666c/kg with heifers to 634c/kg.

Grafton store sale on Thursday penned 1783 head, double the expected number from an estimate the week prior after an October yarding of just 240 head. Heavy steers sold to $2006, cows to $3025; light steers to 666 cents a kilogram and light heifers not far behind at 634c/kg.

Buyers sent cattle west from Dubbo and Tamworth to the Darling Downs but local restocker competition was very strong, with many remaining in the Clarence Valley.

Ross and Tracey Lawson bought a pen of black baldy, 369kg, for 346c/kg or $1279 for grass finishing. "My numbers were getting down," Mr Lawson said.

Jeff Archer, Coombadjha Pastoral, bought milk tooth Droughtmaster/Brahman steers 337kg for 438c/kg or $1476 and will grow them out to bullocks on river country.

"We won't get a return for three or four years so it's a gamble at these prices but you've got to replace your cattle," he said.

"Our production costs are exceptionally low and we live very simply," Mr Irwin said. "We came to Grafton the night before the sale to stay in a motel, eat a succulent Chinese meal and watch TV."

Mark Heyman, Seelands via Grafton paid $2250 for red tagged Droughtmaster heifers by Billabong stud bulls because he knew the lineage, having bred them with his son Todd, now the breed society president. "We sold a property at Lilydale and they went with it. Now their place is being sold again."

"Who's to say prices will be much different next year?" he asked.

Ben and Ken Slack-Smith, from nearby OBX Creek, sold Angus cross to 492c/kg for 215kg.