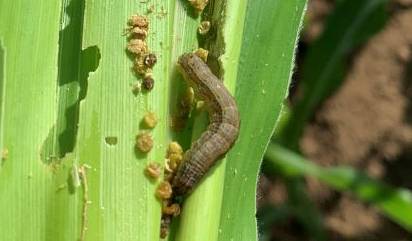 NSW DPI is waiting for tests to confirm suspect larvae found in Hillston crops and other areas. Photo: Queensland DAF

FARMERS across the state are being urged to be on the lookout after recent sightings of fall army worm.

The warning comes after two moths trapped at Hillston were this week confirmed as FAW and DPI.

The NSW Department of Primary Industries is waiting for tests to confirm suspect larvae found in Hillston crops and other areas.

Producers are now on high alert as the pest has been sighted at Hillston, Croppa Creek, Breeza, Forbes, Dubbo, Narrabri, Wee Waa, Maitland, Moree and Boggabilla.

"The moth-trapping surveillance system, which was put in place by DPI and Local Land Services (LLS), and in-crop inspections by growers and consultants, particularly in maize and sorghum, are the first actions of an effective FAW management plan," Mr Gordon said.

"Regular monitoring, detection and early spraying of FAW with selective insecticides when they reach recommended threshold levels, targeting instars before larvae bury themselves in leaf whorls and ears of maize, will deliver the best results.

"Growers and advisers should look for early signs of crop damage, such as windowing of leaves, as small larvae are difficult to identify.

"We recommend growers keep suspect larvae on host crop leaves and let them grow for a few days until they can be more easily identified."

"We are finding parasitised FAW larvae in the field and advise growers to use selective insecticide options to conserve beneficial insects and help suppress FAW as part of an integrated pest management (IPM) strategy," Dr Bird said.

"DPI has found high levels of resistance to synthetic pyrethroids in FAW and growers are advised to avoid these chemicals, which are ineffective in controlling FAW and harm beneficial insects.

"Overuse of selective insecticides could threaten Helicoverpa resistance management if there is an increase in the frequency of sprays in crops where the two species occur together."

Dr Bird said the "DPI has developed screening procedures closely aligned to those used in Helicoverpa to help monitor resistance in FAW."

"The use of organophosphate and carbamate chemicals is not recommended as genetic testing has indicated FAW carry markers for resistance to these chemicals," she said.