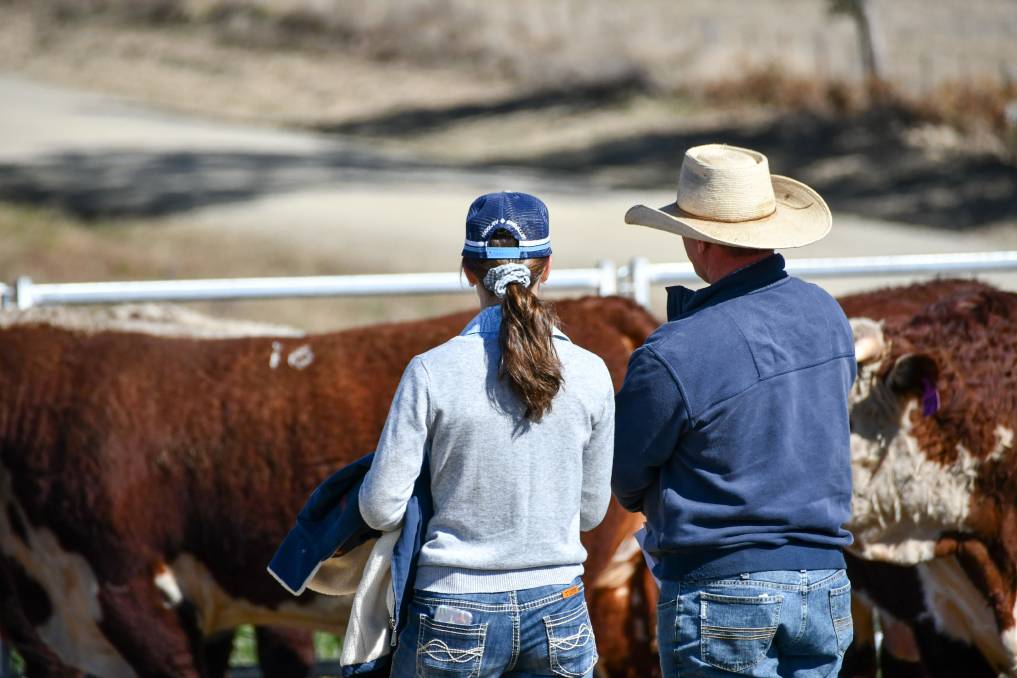 The Land's Matthew Campion believes estimated breeding values should be used for sire selection as a tool, not a rule. Photo: Lucy Kinbacher

I still remember driving around the paddock with my father one day.

He turned to his eight-year-old son and said, 'Don't focus on the numbers and data. Let's breed cattle we love to look at and cattle that will perform'.

Contrary to popular belief, I think this is still relevant today.

Phenotype or figures? It's the great debate.

Nowadays many stud breeders will not buy a bull without above average EBVs while commercial cattlemen are also focusing on EBVs more and more.

How many bulls this selling season were bought on figures alone? How many were left behind because they didn't have the desired figures?

To me visual appraisal is and always will be number one.

As a 21-year-old I'm from the younger generation and that is primary reason I'm so passionate about this.

I've been raised with computers so EBVs should be all I know and unfortunately I see a huge amount of young breeders with their head in a catalogue instead of looking right in front of them.

I can't see this ending well.

This is why I think the younger generation needs to talk to experienced breeders or agents about what makes a good beast and learn there is so much more than a birthweight figure, calving numbers, indexes or growth and carcase figures.

Good calving is bred into a herd. It's not just about using low birthweight bulls all the time, but from physical traits of that lovely wedge shape, big barrel and smooth shouldered bulls.

Imagine a bull with a birthweight EBV of 8.2 is joined to heifers. But they all calve naturally and weigh on average 38kgs. Sounds like a dream scenario.

That bull never would have been joined in that circumstance if a breeder used his figures alone.

Phenotype, structural correctness, constitution and do ability are still the greatest and most important traits.

Without constitution and doability we greatly limit the lifetime of a sire and our profit.

It's better to have functional, structurally correct saleable cattle rather than cattle with fashionable figures alone.

In hard times, cattle with good phenotype will always survive and be marketable.

Let's not forget at any weaner, store or fat sale figures are nowhere to be seen.

Step foot into the big weaner sales in Victoria or the George and Fuhrmann Hereford feature sale and the calves with big red eyes and dark coats always sell easily.

They're generally the heaviest and attract premium prices but buyers will walk past the light coated white eyed calves more often than not.

We must remember that figures are estimated and our eyes were around long before computers so let's continue to use them as our number one priority for cattle selection then refer to data.

Breed for profit and balance; get in calf, calve unassisted, maintain condition on grass and wean a heavy calf then do it all again.

I cannot find a figure for this... that right there is what drives profit in the industry.

I am, however, a believer in figures for sire selection but as a tool, not a rule.

When used in conjunction with phenotype, figures serve their purpose admirably.

I believe studs should all aim to increase there overall Breedplan performance, not select for single trait improvements only.

Let's also all collect as much data as possible and submit it; the higher the accuracy the better.

Hopefully one day we will get to the point where EBVs will be just as important as the visual appraisal of an animal.

The other huge advantage is the comparison within the wider beef industry that individuals can gain.

Figures are becoming more reliable, accurate and necessary which is only a good thing.

The moment we lose what makes our breeds great and focus on figures alone we lose all we've worked so hard for.

Find the best sires that phenotypically suit your program, make sure they are structurally correct and then use figures to differentiate.

We should all be breeding cattle that we want to show off to our children when we take them for a drive in the paddock.